At the forefront has been Judicial Crisis Network, which has spent at least $6.3 million in five weeks on national television spots supporting the Republican effort. 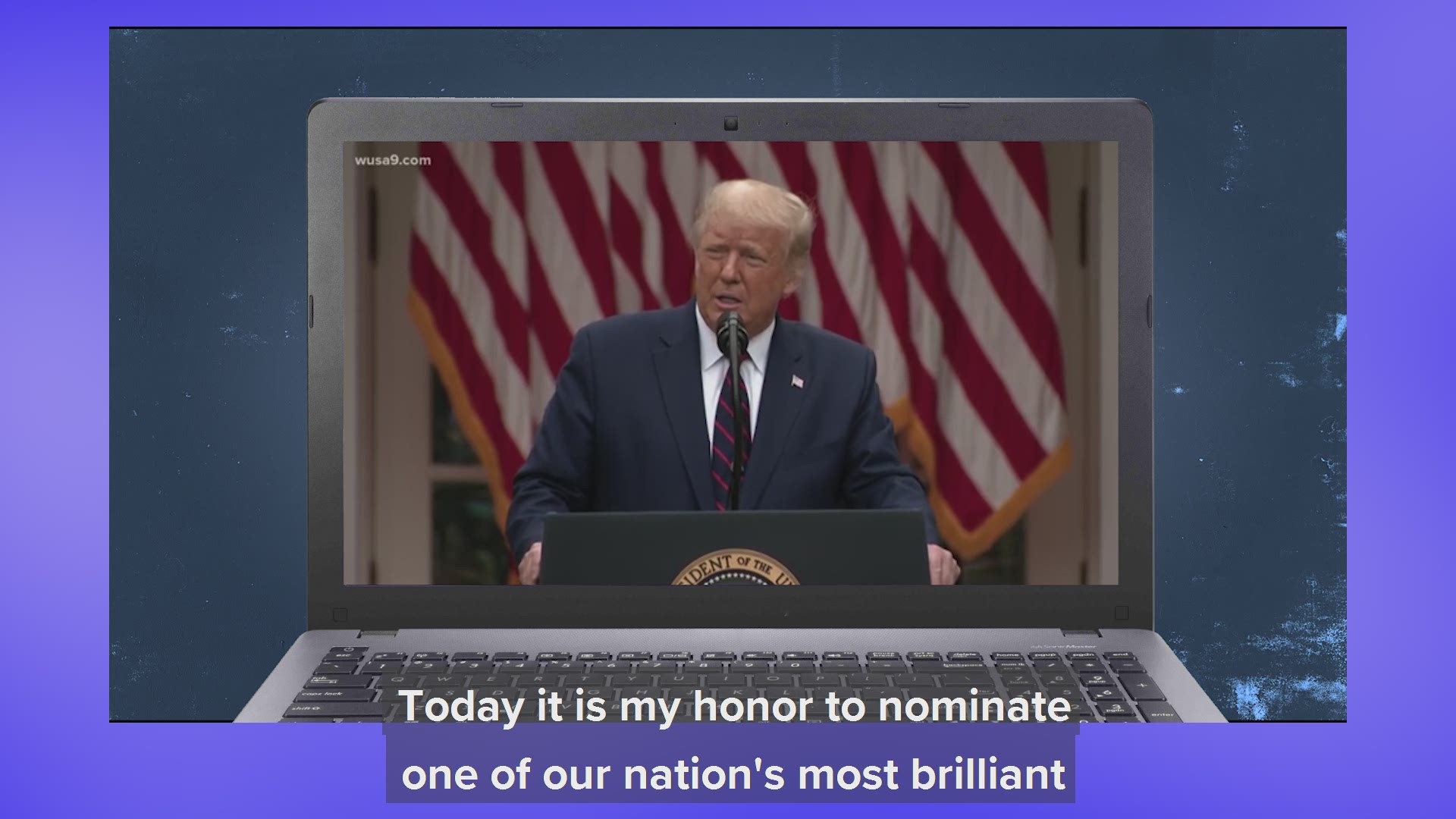 The confirmation of Amy Coney Barrett to the Supreme Court is the culmination of a decadeslong coordinated effort by a constellation of conservative groups, fueled by tens of millions of dollars from wealthy anonymous donors, to tilt the high court farther to the right.

At the forefront has been Judicial Crisis Network, which has spent at least $6.3 million in five weeks on national television spots supporting the Republican effort to confirm President Donald Trump's nominee a week before the election. The group spent an additional $2.9 million on digital ads, direct mail and text messages supporting Barrett as of Oct. 26, according to data obtained by The Associated Press from a conservative advertising firm.

The Judicial Crisis Network ads have touted her background as a law professor turned judge, who is also a mother of seven who models conservative family values. The ads have also sought to frame any questions about her involvement in a charismatic religious community that opposes abortion and same-sex marriage as attacks on her Christian faith.

"Democrats and liberal activists are attacking Amy Coney Barrett for her Christian faith. It's shameful bigotry," says the female narrator of the 30-second spot, which includes clips of Democratic senators questioning Barrett about her beliefs in her 2017 confirmation hearing for the federal appeals bench. "Democrats know she's brilliant and principled. So their attacks on her faith will only get worse. Stand with Amy."

The president has made it a priority to appoint conservative justices who appeal to conservative voters, especially white Christian evangelicals.

"This was a major factor in President Trump's successful election in 2016, and it's an issue that has long been incredibly motivating for conservatives," Carrie Severino, the president of the Judicial Crisis Network, told the AP last month. "They realize the significance of the Supreme Court, that this is someone who is going to serve for a generation."

Overall, the Judicial Crisis Network, which was founded in 2005 to promote President George W. Bush's nominees, said it would spend at least $10 million to support Barrett's confirmation — roughly the same amount it spent to successfully advocate for Trump's prior picks for the high court, Justices Neil Gorsuch and Brett Kavanaugh.

But just where the millions backing Barrett came from remains a mystery.

The 501(c)(4) nonprofit social welfare group is not required to disclose its donors, and the mailing address listed on its most recent tax forms matches a UPS store in Washington's Georgetown neighborhood. But a Washington Post report revealed last year that the group operates out of a downtown D.C. office located on the same hallway as The Federalist Society.

The Society is dedicated to promoting a conservative or libertarian vision for the nation's courts. Barrett was a longtime Federalist Society member before becoming a federal judge, according to the questionnaire she submitted to the Senate Judiciary Committee. So were Gorsuch, Kavanaugh and their fellow conservative justices Samuel Alito and Clarence Thomas.

Leonard Leo, co-chair of the Federalist Society, has been an informal adviser to Trump on the selection of judicial nominees. A consulting firm he partly owns, BH Group, has also been paid by the Wellspring Committee Inc., a nonprofit group that has been a primary donor to the Judicial Crisis Network. Wellspring reported giving $14.8 million to Judicial Crisis Network in 2018, roughly two-thirds of the money it received that year. All that money came from just four unnamed donors, according to the Wellspring tax filing, the most recent one publicly available.

Leo is also listed as the sole trustee of the Rule of Law Trust, another 501(c)4 nonprofit that raised $80 million from unnamed donors in 2018, even though it has no website and no apparent employees, according to a report this month from the campaign finance reform advocacy group Citizens for Responsibility and Ethics in Washington. Rule of Law Trust then paid $4.3 million to Leo's consulting firm to be passed through to other vendors, according to its tax return. Judicial Crisis Network also reported paying BH Group an additional $1.2 million in fees that year.

Leo did not respond to a voicemail seeking comment. An email to the Federalist Society also received no response.

In an interview with the AP, Severino wouldn't discuss where Judicial Crisis Network gets the millions being spent to support Barrett's confirmation.

"We do have a policy of protecting our donors' anonymity and First Amendment freedom of association," she said.

During Barrett's confirmation hearings this month, Democratic Sen. Sheldon Whitehouse of Rhode Island highlighted the outsize influence of the groups tied to Leo and the Federalist Society on Trump's judicial nominees.

"There's big anonymous money behind various lanes of activity," he said, referring to the campaigns to confirm Barrett. "One lane of activity is through the conduit of the Federalist Society. It was managed by a guy named Leonard Leo, and it has taken over the selection of judicial nominees."

He compared the Senate debate to a puppet theater, with the outcome already decided by a handful of ultrawealthy donors.

Another conservative group active in the fight over Barrett's confirmation is the Council for National Policy, a Washington umbrella group for GOP activists. Severino serves on the council's board of governors.

The council does not publicly disclose its members, but the AP obtained a copy of its September 2020 directory from Brent Allpress, an open source intelligence researcher based in Australia.

Among the other Council for National Policy members on hand for the Sept. 26 Rose Garden ceremony was Penny Nance, the head of Concerned Women for America, which ran a monthlong Women for Amy bus tour that hit events in 12 states aimed at boosting support for Trump's nominee.

Also in the Rose Garden crowd was Marjorie Dannenfelser, president of Susan B. Anthony List, an anti-abortion group helping mobilize voters for Trump. Dannenfelser is listed in the "Gold Circle Member" in the Council directory.

Though not at the Rose Garden event, Eugene Meyer, the president of the Federalist Society, is listed as a member in the Council for National Policy directory. Ginni Thomas, the wife of Justice Clarence Thomas, is listed as a board member for CNP Action, the affiliated political group.

"CNP has been strategizing to dominate the Supreme Court for decades," said Anne Nelson, a Columbia University researcher who wrote a book on the group. "They have worked through the Federalist Society, the Heritage Foundation, and the National Rifle Association, all run by members of the CNP."

All told, the GOP-aligned organizations are spending roughly double on TV ads supporting Barrett compared to what similar groups on the left mustered to oppose her. For comparison, the progressive group Demand Justice spent about $2.4 million nationwide as of last week, according to the analysis obtained by the AP. It also doesn't disclose its donors.

In a more than hour long speech at the Council for National Policy's annual convention in August, Trump touted his two past Supreme Court picks and promised to nominate more. Despite the pandemic, the event was held in person at a luxury hotel across the Potomac River from Washington.

"We'll appoint more conservative judges and justices," Trump pledged to applause a month before Justice Ruth Bader Ginsburg's death, according to a White House transcript. "We will protect religious liberty, defend the lives of the unborn, uphold free speech and safeguard the Second Amendment and your right to keep and bear arms. So important, right?"