Uzbek man ID'd as driver who allegedly killed 8 in NYC 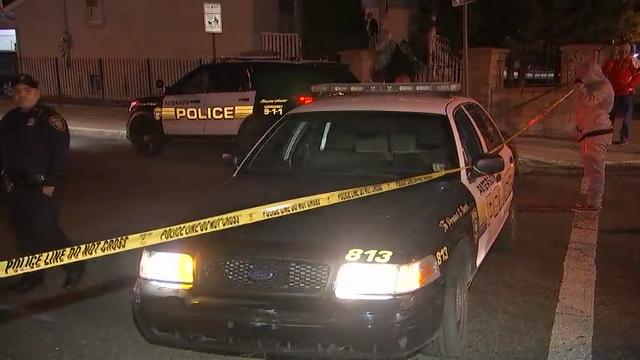 The man accused of plowing a truck through a New York City bike path is a 29-year-old professional truck driver and Uber driver who came to the United States from Uzbekistan in 2010 and lived most recently with his wife and children in the same northern New Jersey city where several 9/11 attack conspirators stayed.

Law enforcement sources said Sayfullo Saipov, who’s been living in Paterson, drove a rented truck onto the path on Manhattan's lower West Side around 3 p.m. ET, killing eight people and injuring at least 11 others.

This undated photo provided by St. Charles County Department of Corrections via KMOV shows the Sayfullo Saipov. A man in a rented pickup truck mowed down pedestrians and cyclists along a busy bike path near the World Trade Center memorial on Oct. 31, 2017, killing several. Officials who were not authorized to discuss the investigation and spoke on the condition of anonymity identified the attacker Saipov.

He shouted, “Allahu Akbar” — "God is great'' in Arabic — as he emerged from the truck, police said. He was shot and wounded by a police officer at the scene and taken to a hospital for surgery.

CNN said police found a note from the driver in which he pledged allegiance to the Islamic State.

The suspect and his wife came from Tashkent, capital of the central Asian nation. About 80% of Uzbeks are Muslim. It has been a popular recruiting ground for ISIL.

WNBC-TV reported that the truck used in the attack was rented from a Home Depot in Passaic, N.J., which like Paterson is about a half hour outside Manhattan,

Police were at the store Tuesday evening; about a dozen parking spaces were cordoned off. In the center was a white Toyota Sienna with Florida license plates.

According to law enforcement officials, Saipov obtained a driver's license in Tampa, Florida, in 2015. He also drove for Uber, the ride-sharing company said in a statement Tuesday night. Uber said Saipov passed a background check and had driven more than 1,400 trips over the last six months.

The (Bergen County, N.J.) Record reported that Saipov and his wife, Odilova, were married in Summit County, Ohio, on April 12, 2013. He listed his occupation as truck driver; she listed none.

They lived in a two-bedroom apartment at 168 Genesee Ave. in Paterson in recent months with their  young children, the apartment building’s manager told The Record.

“I don’t know much about him,” said the manager, who identified himself as Ali and said he works for the building’s owner, Sulfe Catto. “I rented the apartment to him a few months ago, and I see him very infrequently.”

Authorities stand near a damaged Home Depot truck after a motorist drove onto a bike path near the World Trade Center memorial, striking and killing several people on Oct. 31, 2017, in New York.

Saipov's second-floor apartment is a few steps from Omar Mosque. In interviews Tuesday night, neighbors said they recognized Saipov, and said he attended the mosque regularly with his family.

The mosque was one of several in New Jersey that the New York Police Department targeted as part of a broad surveillance program starting in 2005 intended to identify “budding terrorist conspiracies.” The program was criticized for targeting citizens based on religion and ethnicity.

The NYPD’s brief 2006 report about the mosque did not indicate any crime had been committed there, but noted that it “is believed to have been the subject of federal investigations."

Mahmoud Attallah, a former spokesman for the mosque, told The Record he was upset by Tuesday's loss of life. He also worried that the attack could spark an angry backlash against Muslims.

“I was so upset with this situation, these innocent people,’’said Attalah, who lives in Clifton. “Every time we think this is over, and now this, and there is this guy from Uzbekistan, and he’s not even Arabic.”

In May 2001, four months before the 9/11 attacks, hijackers Hani Hanjour and Nawaf Alhazmi rented a one-room apartment in Paterson. During the summer other hijackers also were seen there by neighbors.

In March 2015 Saipov, listing a Paterson residence, was stopped by police in Pennsylvania, according to court records. He pled guilty to exceeding the maximum length of a trailer, records show.

In November 2012, when he was previously stopped in Pennsylvania, Saipov also listed Paterson as his home. The charge then — failure to comply with license restrictions — was withdrawn, according to court records.

New information also emerged about Saipov’s Ohio connections. He registered a business in the state in 2011 and briefly lived near Cincinnati in Symmes Township.

A family there that came from Uzbekistan said Saipov had stayed with them for two weeks in 2010 in their apartment at Brisben Place.

More: NYC terror attack: At least some victims were from Belgium, Argentina

“He was really calm,” Dilnoza Abdusamatova, who was a teenager when Saipov stayed at her parents' apartment, told The Cincinnati Enquirer. “He always used to work. He wouldn’t go to parties or anything. He only used to come home and rest and leave and go back to work.”

Saipov’s father in Uzbekistan asked Rustam Iskhakov to house Saipov while he tried to get his green card, said Abdusamatova, one of Iskhakov’s children. He didn’t stay for long, Abdusamatova said. He moved out of their home after two weeks and moved to Florida shortly thereafter at the invitation of a friend, she said.

Abdusamatova doesn’t remember what he did for a living while here, but public records show Saipov registered a business at their Symmes Township address in 2011. Saipov called it Sayf Motors Inc.

Brooke Carey, who has lived across the street from the Brisben Place address in a similar townhouse, recognized Saipov's photo when it was shown to her Tuesday night.

"I recognize the face," Carey said. "I remember him keeping to himself."

In Tampa, residents at the Heritage at Tampa Apartments where Saipov appeared to have once lived said they were shocked by the attack and afraid to discuss him. Several interviewed declined to give their names — even though they said didn’t know him.