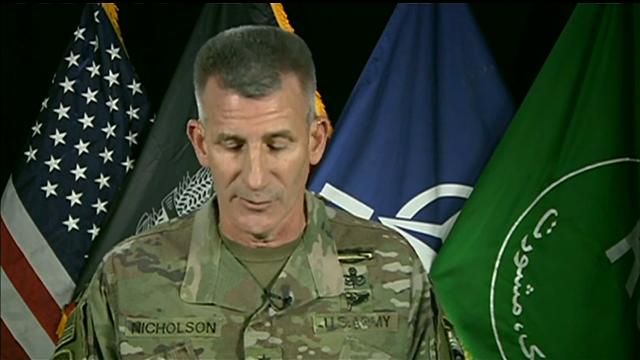 Credit: Mandel Ngan, AP
Vice President Pence arrives to speak to troops in a hangar at Bagram Air Base in Afghanistan on Dec. 21, 2017.

A U.S. service member was killed and four others were wounded during combat on New Year's Day in eastern Afghanistan, the Pentagon said Tuesday.

Two of the wounded service members are hospitalized in stable condition and the other two returned to duty, the U.S. military said.

The U.S. military did not release additional details about the engagement, but U.S.-backed Afghan forces have been combating the Islamic State in eastern Afghanistan.

"We are deeply saddened by the loss of one of our own,” said Army Gen. John Nicholson, commander of U.S. forces in Afghanistan. "At this very difficult time our heartfelt sympathies go out to the families and friends of our fallen and wounded brothers."

U.S. troops are not engaged in direct combat in Afghanistan, but the Trump administration has authorized an increased number of advisers and expanded airstrikes in support of Afghan forces.

Fifteen Americans were killed in Afghanistan in 2017, according to icasualties.org, a website that tracks casualties.