These people have icicles growing inside their New York apartments

Icicles are growing inside these N.Y. homes 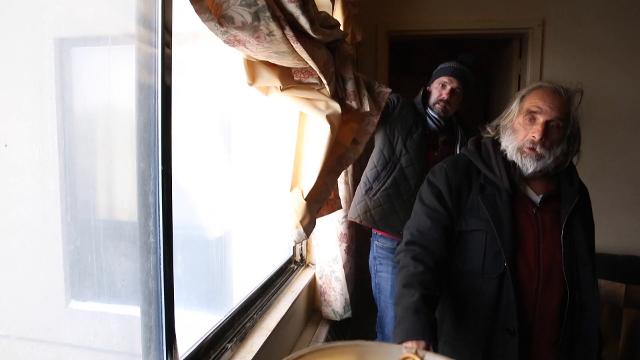 ROCHESTER, N.Y. — Life has never been warm to tenants of a Rochester, N.Y., apartment complex, but the conditions in Vonjlay Kendrick’s apartment these frigid days leave one to wonder how cold it can get.

As for Kendrick, she’s freezing. One look at the windows of her third-floor apartment in Southview Towers and it’s easy to see why. The interior panes are encrusted in ice.

One icicle, as thick as a quarter and 5 inches long, clung to the pane above a steel-grated heater that showed no sign of life.

A thermometer had shown it was 48 degrees in her apartment before Kendrick did what so many other Southview Towers tenants do to heat their places —  turn on the oven and open the door. The practice violates their leases, but they’re desperate.

Monthly rent runs from $575 to $692, and most units are subsidized by the federal Section 8 housing program. The maximum annual income limit for a single tenant is $29,160.

On the fourth floor is John Conner. He’s 59 years old and hearing-impaired. Yet even with his disability he can hear the wind whistling through his windows, the interior seams of which are caked in thick ice.

The curtains in his apartment sway, slow dancing to the high-pitched hum of winter. Tissue paper he stuffed in the cracks was frozen solid and flaked like ice chips.

Heat is included in the rent. As far as Conner or anyone else can tell, though, the thermostat on his wall barely works. There was no way the temperature in Conner’s one-bedroom unit was at the state legal threshold of 68 degrees for apartment buildings this time of year.

More: See a frozen iguana in Florida? It might still be alive

None of the thermostats in any of the units at Southview Towers has a thermometer. They’re dials with numbers 1 to 5. Conner’s was cranked to 5, but his heater was cold to the touch. He might’ve used his oven for heat, but his oven was broken, just like the lock on his door.

It is hard to imagine living quarters with icicles passing inspection, which the U.S. Department of Housing and Urban Development requires of Section 8 units annually. Among the items on the checklist are window condition and heat.

The Rochester Housing Authority, the local agency responsible for Section 8 inspections, could not immediately provide details about when Southview Towers was last inspected. The executive director said Thursday that he was working to find out.

City code inspectors examine apartment buildings as a matter of course every three years to determine whether the properties are eligible for a renewed certificate of occupancy.

A City Hall spokeswoman said the certificate of occupancy for Southview Towers was issued in 2014 and that the building is scheduled to be inspected again next week.

Tenants with icicles said they’ve complained to the property manager, Landsman Development Corp., about their living conditions but that their complaints, particularly about the windows and heat, have gone unaddressed.

"I like the place all right," said Stan Evans, 39, who lives on the 10th floor with icy windows. "They just need to do something about the heat."

Every complaint theoretically generates a work order, and Jim Goff, the chief executive officer at Landsman, said the company tries to respond to every one.

He acknowledged, however, that some orders go unfilled because they call for repairs that the company can’t finance without help from the state and federal government in the form of tax credits.

A survey of tax-credit funded properties by the Federal Reserve Bank of Dallas found that about a third of them needed “substantial repairs” by Year 15 but just 3% of owners had the money to carry them out.

This is where Southview Towers finds itself today.

Goff said Landsman has been waiting for state approval for over a year on a $14 million deal to rehab Southview Towers with new windows and plumbing and upgraded kitchens and bathrooms. He said he was hopeful the project would get the greenlight by spring.

“Do I want to do it tomorrow? If I could, I would,” Goff said. “This isn’t just us as a landlord. It’s an entire system of tax credit investments.”

None of that is the problem of Southview Towers tenants, though.

Their problem is they’re cold.