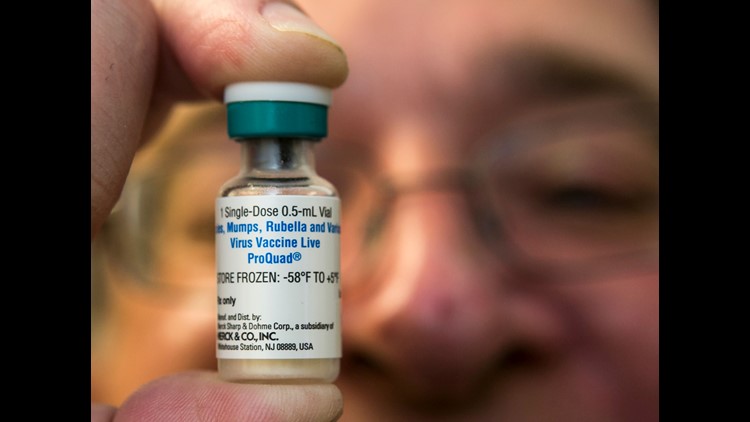 Photo by: Damian Dovarganes, AP
Pediatrician Charles Goodman holds a dose of the measles-mumps-rubella, or MMR, vaccine at his practice in Northridge, Calif., in 2015.

These 15 U.S. cities are hotspots for kids not getting vaccines

A rise in non-medical exemptions by families to opt out of vaccinations for their kids have created hotspots in the U.S. where the risk of contracting diseases like measles are growing, a study finds.

The study, published in the Public Library of Science journal PLOS Medicine, found 12 of 18 states allowing exemptions to vaccines for religious or philosophical reasons have shown an increase in the number of kindergarten-age children enrolled in school with NMEs since 2009.

Researchers studied data on exemptions using data from the 18 states and CDC, focusing on school years from 2009-10 to 2016-17.

As a result, hotspots have developed where the risk of kids getting diseases like measles has jumped because of the growing number of non-medical exemptions.

"As larger unvaccinated populations grow, particularly in highly mobile cities, the potential for vaccine-preventable disease outbreaks grows," said Peter Hotez, professor at Baylor College of Medicine and co-editor-in-chief of PLOS Neglected Tropical Diseases; and Melissa Nolan, an assistant professor of epidemiology at the University of South Carolina, in a joint statement.

The rise in unvaccinated children stems from a discredited belief vaccines are linked to autism. In recent years, multiple outbreaks of measles — once considered eliminated by the CDC in 2000 — have popped up.

A 2016 study published by JAMA from researchers at Emory University links refusals of vaccines to increases in cases of measles and whooping cough.

Hotez and Nolan said a second study is underway on these areas to learn how to better target campaigns aimed at encouraging more families to allow vaccinations.

According to the most recent Centers for Disease Control and Prevention data from 2015, nearly 92% of kids ages 19 to 35 months received a vaccination for measles, mumps and rubella (MMR). Most states require children to have up-to-date vaccinations to enroll in public schools.

"Our concern is that the rising NMEs linked to the anti-vaccine movement in the U.S. will stimulate other countries to follow a similar path," reads an excerpt from the study.