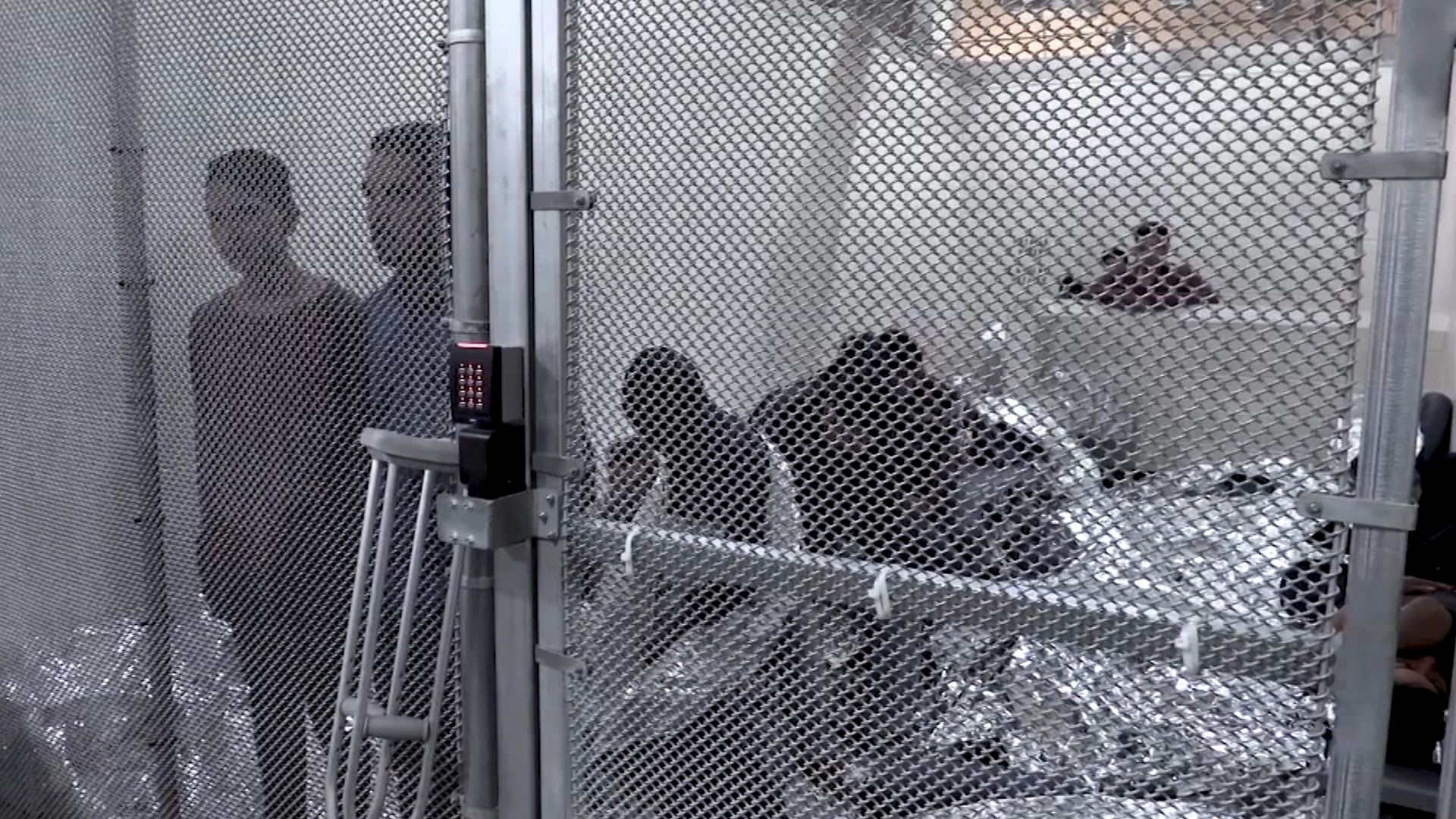 McALLEN, Texas – Confusion reigns on the border as immigration officials, prosecutors and Border Patrol agents scramble to fulfill the president’s demand for a zero tolerance approach to unauthorized migrants while simultaneously keeping families together.

President Donald Trump’s decision Wednesday to order that migrant families be kept together – an abrupt reversal of his earlier stance – sowed more confusion into what was already a complicated system of law enforcement, courts, warehouse-like detention buildings and re-purposed daycare centers.

Advocates are near tears as they struggle to reunite parents with kids who have been whisked away by the byzantine federal bureaucracy that’s placed children in as many as 15 separate states. Meanwhile, the court system maintains its grinding job of processing of dozens of migrants daily, fulfilling the president’s promise to punish anyone caught crossing the border illegally.

USA TODAY has been on hand for an in-depth look at how the problems are unfolding in McAllen, the busiest border point for unauthorized migrant crossings.

Magistrate Judge J. Scott Hacker raps on the courtroom door as he enters and nearly 70 shackled migrants stand without a word. Here in this stifling 8th-floor courtroom in downtown McAllen, these migrants will plead guilty to a misdemeanor charge of sneaking across the border, pay a court fee averaging $10 and be released from criminal custody with a sentence of time served.

They aren’t free to go yet, but how they’re treated demonstrates the challenges faced by the government and advocates as they manage the flood of people seeking a better life in the United States.

Trump has insisted that virtually everyone caught crossing the border be criminally charged, and Hacker must ask each detainee whether they understand what’s going on, to confirm their real name, and to plead guilty.

Occasionally adjusting his reading glasses, Hacker runs down the list of prisoners who have been seated in alphabetical order, their legs shackled but their right arms free to swear an oath to tell the truth. Before beginning, Hacker warns them that lying in court could bring felony perjury charges and a far harsher punishment than the misdemeanor they’re charged with today. Most of the people at this hearing were detained by Border Patrol agents on Wednesday. None are parents who were traveling with children, and all are adults claiming to be 18 or older.

Credit: Trevor Hughes, USA TODAY
A migrant boy released from federal custody gets help down from a bus by a private security guard in McAllen, Texas, on June 22, 2018.

Thursday is the first day that no parents have been separated from their kids at the border, brought to court and charged. On Wednesday, 17 adults brought to court after being split from their children were hustled back onto a bus and returned to a detention center without being charged. Their fate in the courts remains unclear.

“Si,” says one of Thursday’s detainees in response to a question from Hacker. “Yes,” barks a blue-suited interpreter. “Si,” says the next. “Yes,” barks the interpreter. The hearing goes on like this, Yes after Si, all morning. As required by law, each of the migrants met with a federal public defender before the hearing, and each pleads guilty. The shackles jingle. The guards scowl. Reporters scribble.

'Torture of the Children'

Efren Olivares, an attorney with the Texas Civil Rights Project, is torn. On one hand, Thursday is the first day in about a month that not a single parent has been brought to federal court after being split from their children. That’s good, he says. The bad news? The federal government has no concrete plans to reunite families who have been separated, he says, and it’s possible this new policy will be changed at any moment. For weeks, Olivares has  been meeting with migrant parents who’ve been separated from their families.

“It is absolutely a form of punishment, and so is prolonged detention,” he tells a gaggle of reporters outside the courthouse. “It’s torture of the children, in my opinion.”

More: Migrant teen held in ICE detention center: 'You could hear them crying all the time'

Like other migrant advocates, Olivares has no idea how the federal government plans to reunite families. Adults and kids separated at the U.S.-Mexican border have been spread to facilities in 15 states, advocates say, and federal authorities won’t discuss exactly how they plan to reunite families, especially when the adults are detained in immigration camps not designed to house children. Advocates say it appears some adults have been deported without their kids, and others have been told its their responsibility to pay for their travel to wherever their kids are being held.

Credit: Trevor Hughes, USA TODAY
Surrounded by adults discussing their next steps, a migrant girl stands quietly amidst the chaos in a bus station in McAllen, Texas, on June 22, 2018.

Olivares said he’s heard that some border guards have been documenting family groups with photographs, and challenged authorities to explain their plans: “What they have now is a rudimentary system.”

Outside the courthouse, Kerry Kennedy is fighting back tears. She’s just watched those nearly 70 migrants being processed for a misdemeanor crime. This doesn’t look like the country she loves, and it’s certainly not the one her father, Bobby Kennedy, envisioned.

“Nobody deserves to be treated this way,” Kennedy said as the hot Texas sun glared off the pavement. “The first question is why these men and women are in a criminal proceeding in the first place. This will cause trauma for the rest of their lives.”

Kennedy and staff from the Robert F. Kennedy Human Rights nonprofit attended court Thursday so they could better understand the process. It horrified her: “That’s not who we are as American people. That’s not the kind of county most Americans want it to be.”

Kennedy is joining in a hunger strike starting Saturday and planned to last 24 days — one day each for 100 of the estimated 2,400 migrant children forcibly separated from their parents. Strikers will take turns fasting for 24 hours in a McAllen park near the federal courthouse.

A guard walks across the pavement outside the courthouse, dozens of shackles hanging over his shoulder. Inside the black Bentsen Tower, Hacker has finished processing the migrants. Each has been convicted, their guilty plea recorded, their sentence served.

But they aren’t free to go.

Under the Trump administration’s zero tolerance policy, these migrants now face a separate immigration process that will likely end in deportation. Guards for the private security contractors shackle the migrants and herd them onto unmarked buses and vans for transport back to the Border Patrol detention center. It’s not yet noon.

They are responsible for getting attorneys if they wish to fight deportation. Many don’t.

Kindness in the blistering heat

The temperature has broken 90 after several days of rain and street flooding around the city. Outside the downtown bus station, a dozen teal-shirted volunteers huddle in the shade waiting for one of those unmarked buses to arrive.

Federal officials as a courtesy have told the Catholic Charities volunteers that a bus with about 100 people on it will arrive at 2 p.m. from the Ursula Detention Center a few miles away. Able to hold up to 1,000 children when it was first created under President Barack Obama, the detention center has become a flashpoint of international outrage.

The door opens and a private security guard stands on the pavement as a stream of women and young children step off. The guard helps a few bewildered mothers as they struggle to hold their paperwork and their kids. The volunteers step in, offering reassurance and a place to rest. For four years, Catholic Charities has operated a migrant respite shelter in McAllen, providing hot meals, clothes and showers for people released from federal custody and headed elsewhere in the United States while they wait for an immigration hearing.

It’s not clear, even to the volunteers, what criteria the federal government uses to decide to release, although every adult gets an ankle monitor. On Wednesday, the group was both men and women, along with children. Friday, it was only women with young children.

“When you see the children, see the the mothers,, see their faces, you know in your heart it’s the right thing to do,” said shelter founder Sister Norma Pimentel. “God has wired us to care for one another.”

Friday evening, the group walked in the hot sun the few blocks between the bus station and the shelter. The migrants released from custody aren’t obligated to visit the shelter, but volunteers say it’s become known as a safe haven. Most of the people released in this group had been held 3-5 days, generally staying with their kids in the Ursula shelter designed initially to just hold kids.

As the group approached, the shelter’s glass doors swung open and migrants straggled through, some carrying kids who were too young to walk. Applause broke out from the volunteers as the doors swung shut. Shelter spokeswoman Brenda Riojas said a little kindness goes a long way.

“You have to realize, for a lot of these people, this is the first time anyone’s smiled at them in days,” she said.