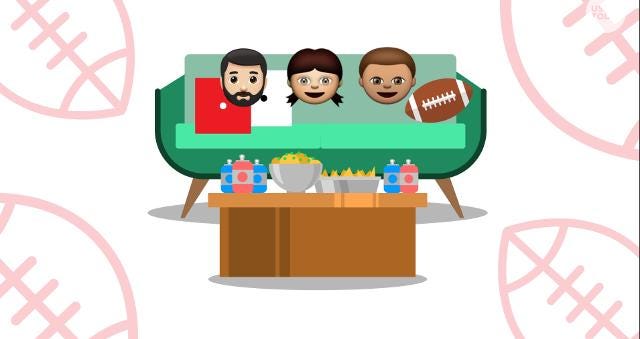 Credit: Getty Images
DraftKings and FanDuel announced that they had agreed on a merger.

For many football fans, getting a little "action" on the Super Bowl is as commonplace as the wings and beer.

Whether it is betting on the outcome of the game itself or participating in "prop bets" (such as whether the opening coin toss will be heads or tails) or "boxes" (also known as "squares," where you try to predict the correct last digit of the NFC and AFC team's score), wagers of various kinds can often be found at Super Bowl parties across the country.

According to the American Gaming Association, Americans will wager roughly $4.6 billion illegally on this Sunday's game between the New England Patriots and Philidelphia Eagles. That's in addition to the $138.5 million legally bet through licensed sports books in Nevada.

Daily fantasy sports sites DraftKings and FanDuel want to get in on all the fun. In the days leading up to Sunday's Super Bowl, both sites have launched new Super Bowl-focused games to allow people to compete not just against their friends at their local Super Bowl party, but against other fantasy sports players around the world.

More: The average American will spend $81.17 on the Super Bowl. How about you?

More: How to get your fancy new TV ready for Super Bowl Sunday

These sites don't take bets on the game. But players can win money from various Super Bowl-related fantasy contests — such as picking a roster of players from Sunday's game — and depending on those players' performance, win a cash prize. It's the first time either site has offered a daily fantasy option for the Super Bowl.

DraftKings' new game is a slight variation on its traditional product. Called "Showdown," users can select players from the Eagles or Patriots roster. And you can add defensive players to your roster, not just offensive players.

As with other DraftKings games, users can create a private contest for their friends or enter their roster into a variety of public contests for a chance to win cash and other prizes. Entry fees range from 25 cents for a tournament-style contest with thousands of players fighting for a share of $15,000 in cash to $10,600 for a three-person contest where the winner takes home $30,000. Private contests between friends can be free or for money.

The marquee game is a $20 entry fee with DraftKings promising to dish out $2.4 million in prizes, including a cool $1 million for first place. The game had more than 63,000 entries as of Thursday afternoon.

FanDuel, meanwhile, is hoping to capitalize on the Super Bowl's famous prop bets to bring people to its site, partnering with video game retailer GameStop on a prop bet "bingo" game.

"We realized that the Super Bowl is the biggest consumer event around sports," says Nik Bonaddio, FanDuel's head of product. "For whatever reason DFS (daily fantasy sports) might seem, on the surface, too complicated for some people, so we wanted to build out a nice simple game that everyone can enjoy."

The bingo game, which will be free to enter, will incorporate actual game events, like if there will be a missed field goal, as well as some of Super Bowl Sunday's more "out there" aspects, such as if a streaker runs across the field or if *NSYNC reunites during Justin Timberlake's halftime show.

In addition to the bingo game, FanDuel will also offer a variation on its more traditional contest for the Super Bowl. Unlike DraftKings, FanDuel's roster will consist of any combination of five offensive players from either team.

FanDuel's marquee game, which has a $9 entry fee, will also award $1 million to one lucky winner.

As of Thursday afternoon, FanDuel said more than 250,000 people had entered the bingo game. While it is starting the bingo offering with the Super Bowl, FanDuel plans to put it to use for other big events, including the upcoming NBA All-Star Game on Feb. 18.

The single-game format will also make appearances at other major games, including the aforementioned NBA All-Star game and before future nationally televised prime-time basketball games.

Bonaddio also isn't ruling out future Bingo games for venues outside of sports such as the Academy Awards, a president's State of the Union address or even The Bachelor.

More: A look at the key players in Super Bowl 52