Our kids are 'worried about getting shot' in US schools 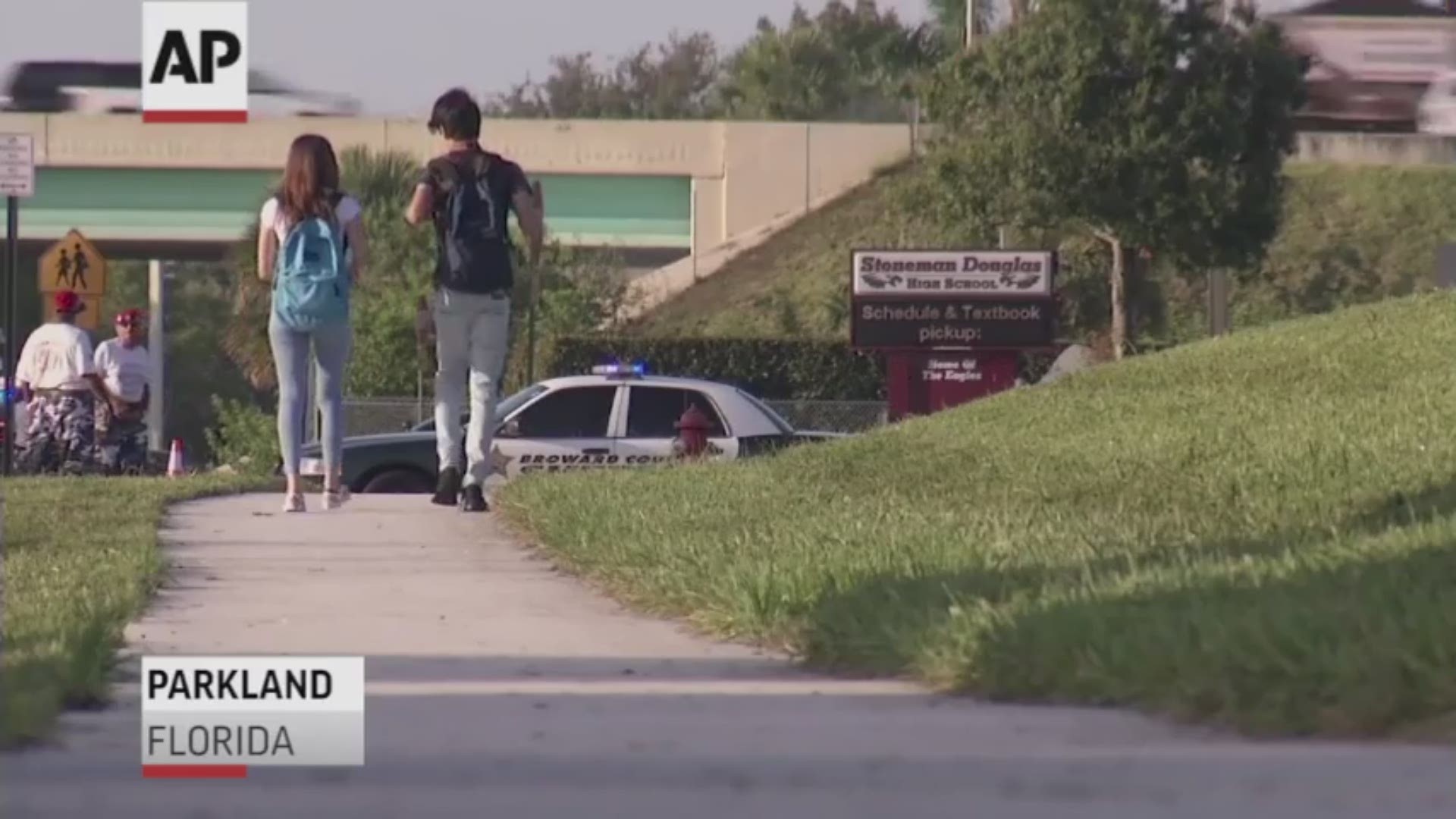 Lesley Kluchin, who taught school for 36 years and still volunteers at her grandchildren's elementary school, is struck by the singing.

The kindergartners and first-graders have special songs that help them remember what to do if their cheerful classroom suddenly becomes a danger zone and where to run if their school is next in a seemingly endless string of mass shootings.

“These children are growing up so that they sing a little song and they get into hiding places – it's just terrifying to watch," Kluchin said, describing the frequent active-shooter drills in her grandchildren's school in Florida. It's not far from Marjory Stoneman Douglas High School in Parkland, where 17 people lost their lives in a shooting in February.

“I think what scared me the most is being in my granddaughter’s kindergarten classroom," she said. "And all these babies, literally, hugging me, terrified."

Kluchin isn't alone this back-to-school season. As parents pile school supplies into shopping carts, students troop into new classrooms and teachers put finishing touches on lesson plans, concern over school safety in an age of mass shootings is at an all-time high.

Roughly one-third of today's parents fear for their child's safety in school, according to a poll by Phi Delta Kappa, an educators' association. That's the highest proportion since 1998 and a steep increase from 2013, when that number was only 12%.

Schools are taking action as they confront the reality that they easily could be the next target. From sophisticated surveillance technology to programs that train and arm staff, many school boards have developed safety measures that make schools feel increasingly like ballparks, airports and museums.

“Twenty years ago, we weren’t even trained to do active-shooter drills in the school," said Curtis Lavarello, executive director of the School Safety Advocacy Network, which helps schools assess their vulnerabilities and develop safety plans. "Our primary goal now in law enforcement is to make sure that the school is equipped to handle the very worst of the worst.”

Each high-profile tragedy to hit headlines in recent years has sparked fury and cries for change. But the shooting in Parkland Feb. 14 – and a burst of activism by the shooting's survivors – cemented gun violence in the public conversation for longer than usual.

Marjory Stoneman Douglas students began a campaign for changes in gun laws, drawing thousands to Washington, D.C., for the March For Our Lives. The Trump administration formed a commission to address school safety, headed by Education Secretary Betsy DeVos, and Florida passed a law funding more resource officers and a program to arm some teachers.

“I’ve never seen this phenomenon," Lavarello said. The Parkland shooting "happened last February, and it still seems as fresh in everybody’s mind today as it did right after it occurred."

Lavarello said requests for help with safety plans jumped more than 60 percent since this time last year, and at this summer's national school safety conference, attendance was 45 percent higher. The vendor hall at the conference last year had about 50 exhibits; this year, there were more than 110.

“It’s gotten to the point where I don’t have enough staff or people to go out and do every school that we’re expected to do," Lavarello said.

Santa Fe High School, the site of a shooting that killed 10 in May, greeted students with metal detectors and armed officers Monday.

Credit: Courtney Sacco, Caller-Times, via USA TODAY NETWORK
People attend a vigil outside Santa Fe High School in Santa Fe, Texas, on Aug. 19 2018. The vigil was held the day before the first day of school. On May 18, 2018, eight students and two teachers were killed in a mass shooting.

All over the country, school districts have taken similar precautions. In Charleston County, South Carolina, schools are experimenting with bullet-resistant doors. New Hampshire's Londonderry school district has a system that allows teachers to press a panic button on their computers and alert authorities. A school in Haverhill, Massachusetts, installed a network that identifies the sound of gunfire and alerts officials.

At Hamilton City School District in Ohio, a new policy requires students to keep backpacks in lockers during the day. And teachers will participate in a training program that teaches them to stop heavy bleeding if necessary – a change that stemmed directly from Parkland.

“Every time there’s an incident somewhere in the nation, it’s likely to send out shock waves," Hamilton City School District superintendent Larry Knapp said. "And we learn from those incidents – from what the bad guys are doing – different ways that we can protect ourselves."

New protective measures vary drastically. The school district in Cody, Wyoming, approved a program in April that allows staff members to complete training and carry weapons in school – putting into practice a controversial approach to school safety suggested by Trump after Parkland.

Ray Schulte, the superintendent of that district, said arming staff was the solution that best fit the needs of his district. And when the school board consulted the community, about three-quarters of the residents they surveyed supported the plan.

"We’re a rural community with a couple of pretty isolated small schools," he said. "When you looked at the response time, people will tell you that every minute counts, so you have a couple options. You could either hire a police officer for every building or you could choose to arm staff – and our district took the option of arming staff."

Families search for their own protection

While school districts grapple with drills and safety plans, parents and students are beginning to take action themselves.

Yasir Sheikh, CEO of Guard Dog Security, a bulletproof-backpack manufacturer, said  the backpacks – an increasingly popular product designed to shield a person from gunfire – typically see a spike in sales after mass shootings.

But this fall, months after the last major shooting, sales are likely to experience double- or triple-digit increases from last year's back-to-school season, the company said.

"Consumers and parents are making it a proactive decision – buying our backpacks – rather than a reactive one,"  Sheikh said. "There hasn’t been a mass shooting recently, but people are still looking for these products."

Tina Galterio, who lives in the Denver area, is one of those parents. After the Parkland shooting, she bought a bulletproof backpack for her 7-year-old daughter.

“The backpack is bigger than her," Galterio said. “When it came in the mail, it broke my heart – I started crying."

Galterio, a graduate of Columbine High School – the site of one of the first major school shootings in 1999 – has done her best to educate her daughter about the dangers of gun violence without scaring her. They've been to the memorial at Columbine. But she knows the backpack is no guarantee of protection.

“I understand that everything would have to be perfect for that to be something that actually would save her,"  Galterio said. "But to do nothing doesn’t work for us."

Students, particularly those old enough to fully understand the threat of gun violence, have even adopted their own safety measures.

Hannah Miller, who is about to begin her senior year at T.C. Williams High School in Alexandria, Virginia, keeps a doorstop in her backpack. After Parkland, her mother researched ways to stay safe during an emergency and had learned that a doorstop placed under a closed door will keep the door shut even if the lock is broken.

“In every single classroom last year, I started looking at where I was sitting and where I would go if there was a shooting," she said. "I used to think, 'It can’t happen at our school.' But that's not really true."

'You cannot teach kids when they're afraid'

As each mass shooting chips away at the sacred safety of the classroom, families and teachers have slowly adjusted to a new reality: regular active-shooter drills, debates over security plans, heartbreaking conversations with kids about what to do if their classroom suddenly becomes dangerous.

“It’s just part of their lives at this point, which is sad," said Jim Sanches, who teaches at a charter school in Sacramento. “Sometimes you’re in the classroom, and you’re getting notifications that one is happening right at that moment."

A generation of children are growing up in an age when gun violence is a real threat for schools of every kind, and teachers say the mounting concern distracts students from the task of learning itself.

“Instead of knowing the three branches of  government, they’ve got to know which codes are going to save their lives," Kluchin said.

More: 51% of school violence incidents flared in just 10 states last year. Is your state one of them?

Randi Weingarten, president of the American Federation of Teachers, said the threat of gun violence "just makes a teacher’s job even harder than it’s ever been."

“You cannot teach kids when they are afraid," she said. "It's an epidemic, it's a public health crisis."

When Miller heads back to school for her senior year on Sept. 4, she'll try to avoid thinking about the possibility of a school shooter. She's focusing instead on planning a back-to-school rally on Sept. 8 meant to highlight the threat of gun violence as the school year begins.

That doesn't mean it won't linger in the back of her mind.

"We’re going back to school, and we’re still unsafe in schools," she said. "We should be going to learn – we shouldn't be worried about getting shot."

Credit: Courtney Sacco, Caller-Times, via USA TODAY NETWORK
Ribbons, flags and flowers sit around a tree outside Santa Fe High School in Santa Fe, Texas, on Aug. 19, 2018. The vigil was held the day before the first day of school. On May 18, 2018, eight students and two teachers were killed in a mass shooting.