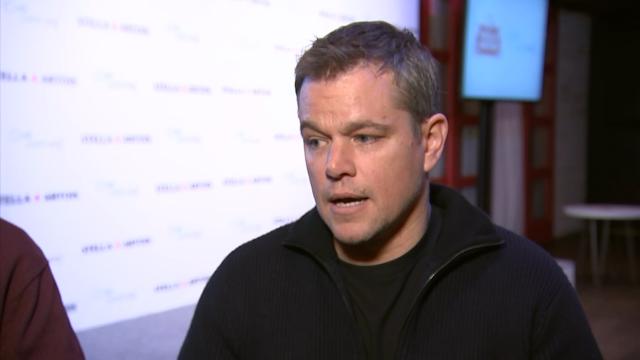 Matt Damon says he's "along for the ride" on the #MeToo and #Time'sUp campaigns, but for the moment he's jumping in the backseat and keeping his mouth shut.

Damon was on Today on Tuesday to promote his clean-water-for-the-world Super Bowl ad. He took the opportunity to apologize for remarks he made last month that suggested there's a spectrum of Hollywood sexual harassment and not all behavior is equally bad.

“Boy, I really wish I’d listened a lot more before I weighed in on this,” Damon told Kathie Lee Gifford.

"You're a good listener," Gifford replied. "Not in this case," Damon said.

“I think, ultimately, what it is for me is I don’t want to further anybody’s pain with anything that I do or say, so for that, I’m really sorry," Damon said.

Damon said many of the Hollywood women behind the #MeToo and #Time'sUp campaigns — to speak up about sexual misconduct and prevent further abuse — are "my dear friends."

"I love them and respect them and support what they’re doing and want to be a part of that change and go along for that ride,” he said. “(But) I should get in the backseat and close my mouth for a while.”

In December, during an interview with ABC News about his latest movie, Downsizing, Damon talked about the spectrum of misconduct that has brought down scores of powerful men in Hollywood and other industries since October. Damon bemoaned the "culture of outrage" we live in.

"All of that behavior needs to be confronted, but there is a continuum," he said. "On this end of the continuum where you have rape and child molestation or whatever, you know, that’s prison. That’s criminal behavior and it needs to be dealt with that way.

"The other stuff is just kind of shameful and gross. ... I just think that we have to start delineating between what these behaviors are."

Immediately, Damon was assailed by the likes of #MeToo champion Alyssa Milano and ex-girlfriend and former Good Will Hunting co-star Minnie Driver, who thought he was "mansplaining" and minimizing certain kinds of sexual predation.

"Gosh it’s so *interesting how men with all these opinions about women’s differentiation between sexual misconduct, assault and rape reveal themselves to be utterly tone deaf and as a result, systemically part of the problem( *profoundly unsurprising)," Driver wrote on Twitter.

It's not clear yet whether Damon's apology will satisfy them and other critics.

Meanwhile, Damon and Gary White, co-founders of Water.org, are trying to persuade more Americans to help solve a global water crisis that endangers millions. In its Super Bowl ad about their campaign, Water.org has again joined beermaker Stella Artois to raise money to help communities get access to clean fresh water.

1 / 32
Harvey Weinstein, seen here in 2011, has formally demanded arbitration and challenged his firing from the Weinstein Company.