The rise of detaining immigrant children 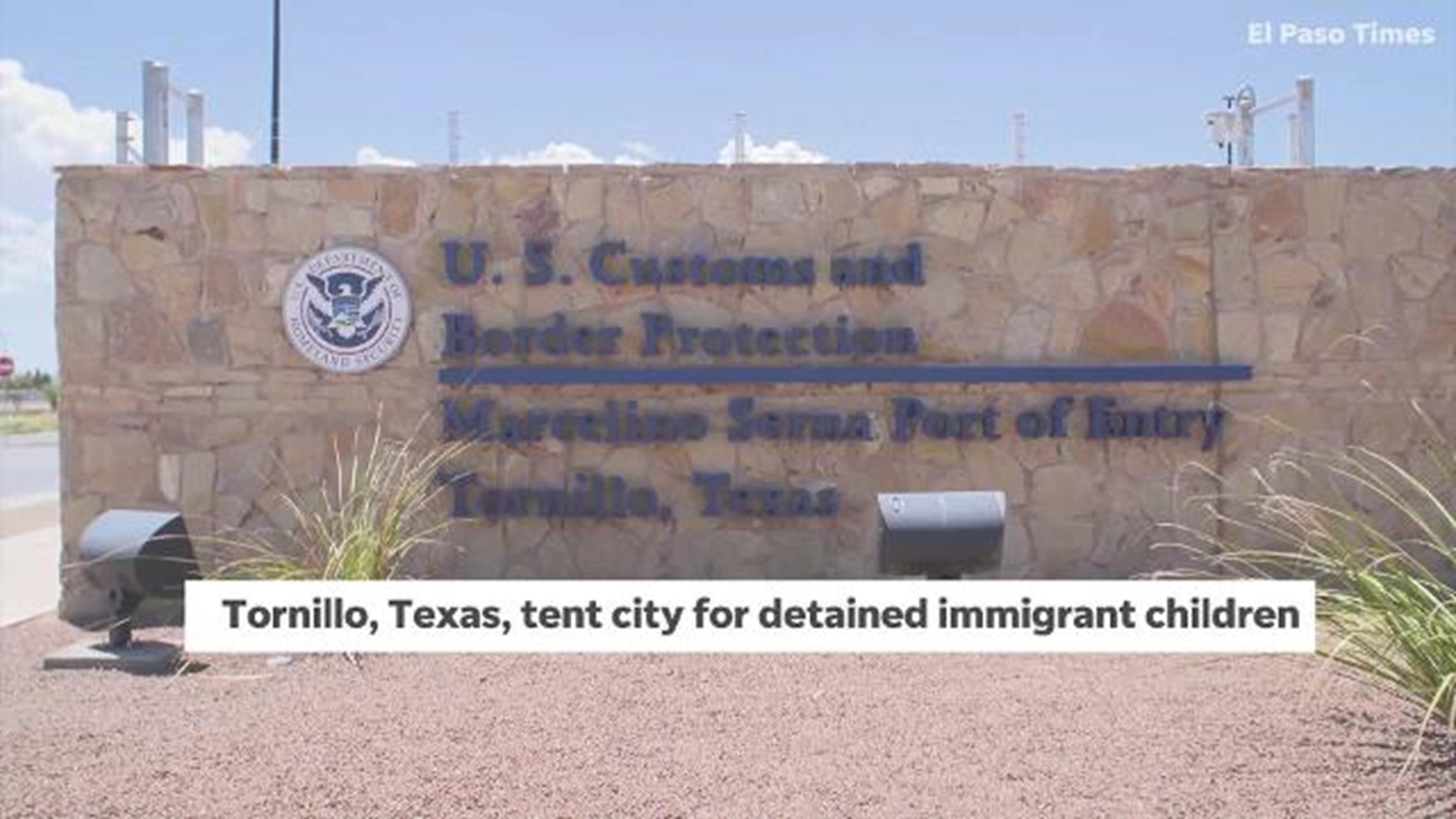 AUSTIN – When the U.S. Office of Refugee Resettlement was handed responsibility for caring for unaccompanied children who came across the border, the volume was staggering.

It took in an average of 8,000 children every year for a decade. Each one needed a place to sleep, three meals a day, medical attention – not to mention counselors, teachers and even lawyers who could talk to them in their native language, which might be Spanish or perhaps a tribal dialect spoken only in a remote pocket of Central America.

Credit: Courtney Sacco/Caller-Times
Two women seeking asylum on Wednesday, June 27, 2018, wait on the Mexico side of the border near Brownsville, Texas.

That's why at least two military posts in Texas are planning to provide temporary housing for as many as 20,000 migrants – many of the children – in the coming weeks and months. On Wednesday, the Defense Department confirmed that space for 2,000 people must be ready within 45 days.

And so are the armies of social service agencies, faith organizations and legal services providers who have stepped forward since the Trump administration in the spring launched its zero tolerance policy on immigration that included separating children from adults caught entering the United States illegally.

1 / 18
Courtney Sacco, Caller-Times via USA TODAY NETWORK
Border Patrol agents take a group of migrant families to a safer place to be transported after intercepting them near McAllen, Texas on June 19, 2018. More than 2,300 children have been separated from their parents at the border as a result of the Trump administration's new "zero tolerance" policy, creating a deepening crisis for the government on how to care for theÊchildren.

Providing services to detained immigrants, especially children not with their parents, is challenging under any circumstances, they say. Adding a military component just compounds the difficulty.

"Military bases are secure facilities," said Melissa Lopez, executive director of El Paso's Diocesan Migrant & Refugee Services. "People need special IDs to get on them. They need to pass through armed guard stations. So that does raise concerns."

Credit: Courtney Sacco, USA TODAY NETWORK
A Guatemalan woman and her child who have been waiting since 6 am seeking asylum wait to enter the on the Mexican side of the international bridge to enter the U.S in Brownsville Texas on Wednesday, June 27, 2018.

Lopez, whose organization provides free and low cost immigration services in West Texas, said she's had little luck obtaining information from federal authorities about how organizations like hers will be able to provide services to people at Fort Bliss and Goodfellow Air Force Base. Those two Texas military facilities will provide space for detained immigrants.

Credit: Michelle Gaitan / Standard-Times
Bishop Michael Sis of San Angelo takes part in a prayer vigil on the steps of the Tom Green County Courthouse for immigrant families who have been separated Monday, June 25, 2018.

According to information by the Office of Refugee Resettlement, which is an arm of the U.S. Department of Health and Human Services, about half of the children placed in the agency's care are older than 14 years old. Two-thirds are boys.

The agency says 45 percent of the children are from Guatemala; 27 percent are from El Salvador and 23 percent from Honduras. The remainder are from other countries.

Agency guidelines say children, who presently are kept in one of the agency's 100-plus shelters in 17 states, must be housed "in the least restrictive setting that is in the best interest of the child, taking into account potential flight risk and danger to self and others."

Credit: AP
A clergy member is arrested during a civil disobedience protest in front of the federal courthouse in Los Angeles on Tuesday. Immigrant-rights advocates asked a federal judge to order the release of parents separated from their children at the border, as demonstrators decrying the Trump administration's immigration crackdown were arrested Tuesday at a rally ahead of a Los Angeles appearance by Attorney General Jeff Sessions.

They are provided classroom education, physical and mental health care, recreation and "family reunification services that facilitate safe and timely release" to relatives inside the United States or to a sponsor, an agency fact sheet updated this month said.

Asked if children who are to be housed on a military base could expect the same treatment, agency spokeswoman Evelyn Stauffer replied, "Yes."

The average stay for a child in one of the shelters is 57 days. Children who reach age 18 in the agency's care are transferred to an adult facility operated by U.S. Immigration and Customs Enforcement while they await immigration hearings, the agency said.

"The overwhelming majority of (unaccompanied children) are released to suitable sponsors who are family members within the United States to await immigration hearings," the fact sheet said.

Service providers say the government is not equipped to provide all of the needs of children being detained. And that's why they are calling for more transparency, especially when it comes to housing immigrants on military posts.

Bishop Michael Sis of the Catholic Diocese of San Angelo, which includes Goodfellow, said that while he's been given little official information, he has been able to cobble together some of the logistic information from what he described as "a variety of sources."

In a news release this week, Sis said Goodfellow will be home to unaccompanied boys who will be housed in air conditioned tents. Food, medical care and education will be provided by a private contractor hired by U.S. Department of Health and Human Services, he added.

Sis said he's been told the camp, which will have a separate entrance and will be cordoned off from other areas on the military installation, is expected to be operational by late July.

Spokesman Brian Bodiford said the diocese intends to do what it can to provide spiritual and other assistance to those detained, but obtaining information from federal authorities remains a challenge.

"We just don't know how all of this is going to work yet," Bodiford said. "But we do want to meet their needs, spiritually and any other way that would be helpful."

Credit: AP
Protesters carry signs and chant slogans in front of the federal courthouse in Los Angeles on Tuesday. Immigrant-rights advocates asked a federal judge to order the release of parents separated from their children at the border, as demonstrators decrying the Trump administration's immigration crackdown were arrested Tuesday at a rally ahead of a Los Angeles appearance by Attorney General Jeff Sessions.

Manoj Govindaiah of the Refugee and Immigration Center for Education and Legal Services, said he's concerned about the difficulties getting services to remote military installations.

"We are actually very worried about our ability ... to gain access to that population," said Govindaiah, the center's director of Family Detention Services.

Kate Lincoln-Goldfinch, an immigration lawyer who represents several women seeking asylum who are housed in a detention center near Austin, said that while the administration is no longer separating children from parent several of her clients are waiting to even see or hear from their children in detention.

Lincoln-Goldfinch said she's not had time to consider the challenges associated with providing services children on military bases. But gaining access to the centers operating in civilian population centers is fraught with hassle, she said.

"Once, I was not allowed to see one of my clients because I was wearing a sleeveless dress," she said.

Another time, she was allowed in, but an interpreter who spoke a rare tribal language was not.

More: 'Where are the children?' Women march on Washington in act of 'civil disobedience' to protest family separations

Lincoln-Goldfinch, who's been practicing immigration law for 10 years, said her first client was a 5-month-old baby whose mother crossed into the country. She still remembers the mother's fear, she said.

"This is not a new thing," Lincoln-Goldfinch said. "Children, families have been coming for a long time. And they're going to keep coming. We are all just getting a much closer look at it now."

1 / 13
Casey Jackson/Caller-Times
McAllen, TX, U.S.A . Genin Rodas, 29, and son is Edison Rodas, 5, from Sab‡, Honduras, embrace each other they wait for a family member to buy them a bus ticket after being released by U.S. Immigration officials on Thursday, May 7, 2018, at the Catholic Charities Rio Grande Valley refugee center in McAllen, Texas. Rodas and his son were separated for four days as they were were help in a detention faculty by U.S. Border Patrol.