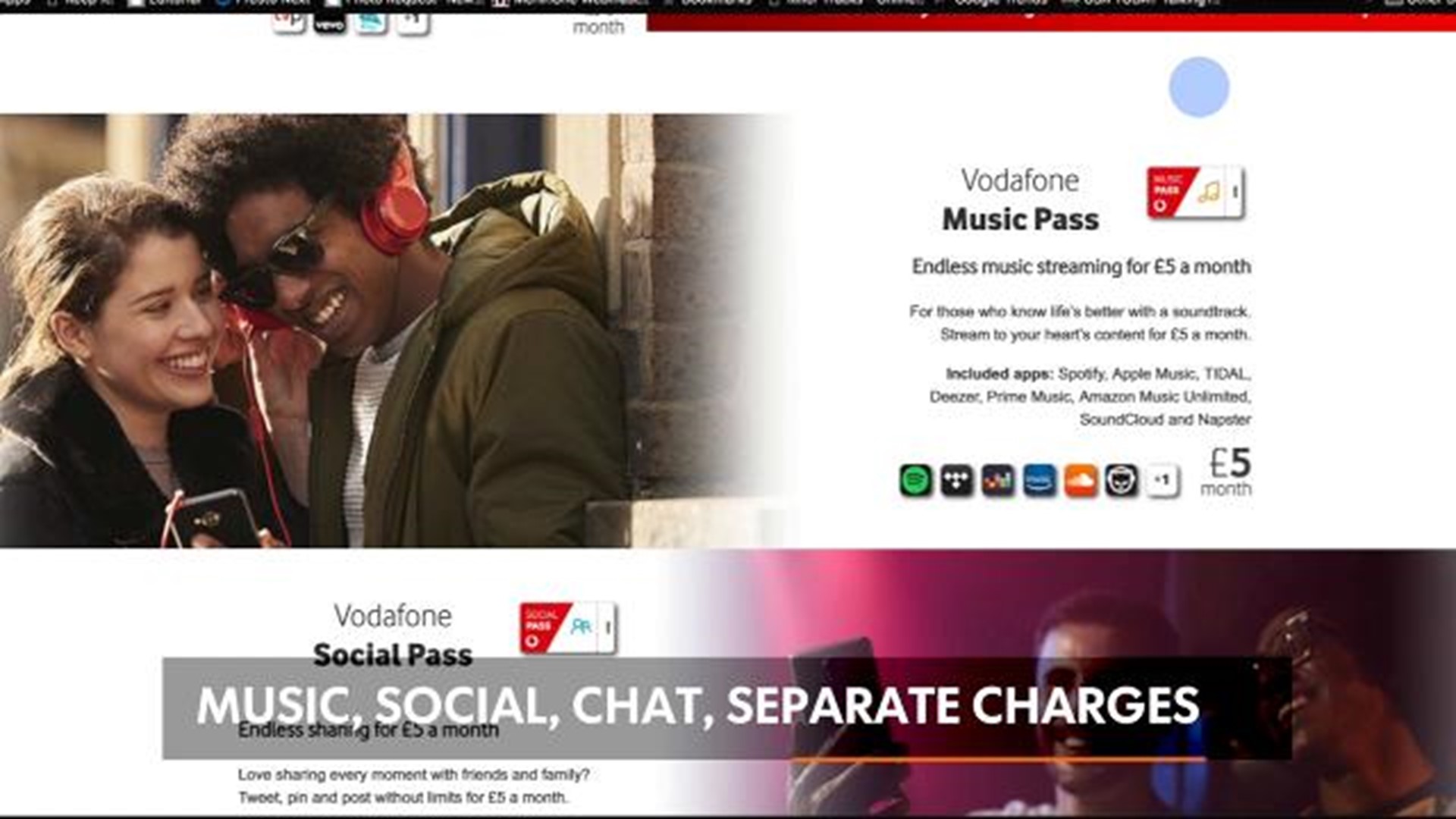 After all, we treat Internet providers as another utility, just like the electric or phone company, with our monthly service fees.

Proponents of net neutrality protest in Washington, D.C. on May 5, 2017.

But what if we had to fork over additional cash for those services, on top of what we're already on the hook for?

Critics of the new relaxed Federal Communications Commission Net Neutrality rules, adopted this week, contend that under the change, companies could do just that — add secondary fees on top of what we're already paying.

After all, in England, wireless company Vodaphone already siphons off video (Netflix, YouTube), music (Spotify, Apple Music) social (Facebook, Twitter) and chat (Whatsapp Messenger) into separate tiers on top of monthly service, averaging around $4 to $9 monthly per "pass," or around $20 for all of them.

So what would we do if that system came here, after we were all done kicking and screaming? I live in an area with just two choices for broadband coverage--Frontier Communications (the former Verizon FIOS) and Spectrum (the former Time Warner.) If one of those two companies suddenly added those new a la carte fees, I'd immediately switch to the other. But what if both did it?

I'd have no choice but to pay. I switched from music downloads to unlimited streaming years ago and I'm not going back. I'll buy the music pass, and ditto for social and video. But what if we took this crazy scenario all the way and saw Internet Service Providers (ISPs) charging separate fees for even more, like internet searches, Snapchat usage, map directions, ride hailing and posting photos?

Think about it for a minute. Could you exist one day without Google in your life? How would we survive without looking things up? It's too late to bring back encyclopedias.

Many younger readers probably don't remember the days when out-of-state phone calls (then known as "long distance,") were considered a luxury. Callers responded by talking briefly, due to the mental image of a cash register going "ka-ching" every minute or so. We got right off the phone.

To keep Google in my world, I'd pay whatever it took, but I'd probably use it less. And the same goes for social media and online music.

How about you? How would you respond?

ISPs have insisted repeatedly that they're not going to throttle our services. FCC chairman Ajit Pai says the move was aimed at "helping consumers and promoting competition," by removing regulations.

The bottom line is that we'd like to go on record and say we deem it highly unlikely the doomsday scenario becomes a reality. We remember what smartphone usage was like before the iPhone changed everything in 2007. Back then, if you wanted to surf the Web on smartphones under the AT&T and Verizon umbrellas, you indeed had to go through those onerous tiers. But that was then.

If the wireless companies go back to the old way of doing business, someone else will emerge to offer consumer-friendly service and leave them in the dust. That's the American way.

And in other tech news of the week...

Apple introduced its biggest, most expensive computer, the iMac Pro. First announced in June, the $5,000 mega-computer finally arrived in stores Thursday. In typical Apple hyperbole, the company says the new unit has Mac's "most powerful" graphics and processors, "advanced" storage and is aimed at photographers, video editors, animators, musicians and scientists. Should you want to load it up with all of Apple's advanced options, it will only set you back around $13,000.

Another long-promised product, Google's Home Max, went on sale Monday. This is the most expensive smart speaker on the market, twice as expensive as the runner-up, the $200 Sonos One and $50 more than Apple's HomePro, which had originally been slated for December, but was delayed until next year. The speaker has superior sound to rivals and is in a "different class," from smaller Amazon Echo and Google Home products, says USA TODAY tech reviewer Edward C. Baig. On the downside, it's big, bulky and pricey, adds Baig.

Shazam, one of the first mobile apps for the iPhone, got snapped up by Apple Monday in a $400 million deal. The app first gained fame for using the smartphone microphone to identify songs. Analysts expect Apple to use Shazam's technology to help recommend songs and artists via its Apple Music streaming service.

T-Mobile, the scrappy no. 3 wireless carrier, plans to expand into cutting-the-cord TV services in 2018 with its acquisition of cable TV alternative Layer3. In a rambling press conference, execs talked more about how consumers hate cable companies than what exactly this new service will be all about. Pricing, channels offered, availability--those hot-button topics were bypassed.

The Walt Disney Co. looks to spend over $50 billion to purchase much of the former 21st Century Fox, including the historic movie lot and the Fox library of movies (including Aliens, Avatar, Die Hard, Ice Age, Deadpool, Home Alone.) Netflix subscribers shouldn't be surprised to see Fox movies disappear from the streaming service. Disney had already announced that its films would be leaving Netflix in 2018 to run on a new Disney streaming service.

Amazon found room for Google Chromecast and Apple TV. Last week we told you how Google had yanked YouTube from Amazon's Fire TV streaming player due to a corporate spat. Google was mad that Amazon didn't stock Google products for sale. Update: This week, Google Chromecast is now coming to the store, along with Apple TV -- which now streams entertainment from Amazon Prime Video. No update from Google on getting YouTube back to Amazon Fire TV, where it's currently scheduled to disappear on January 1.

Your week in audio

Shopper's Guide to Smart Speakers — Just in time for the shopping season, we weigh in on the seven Amazon Echo smart speakers, the three Google Home offerings and the new Sonos One. What's the best speaker for you? Reviewed.com's Samantha Gordon joins the extended discussion.

Short version-- what to do with Alexa and Google Assistant — If you don't have the time to listen to the extended show, tune in my quick take on fun stuff you do with smart speakers.

Wipe your hard drive clean before ditching the laptop — When a listener asked what to do about his laptop he was about to donate, how to make sure the hard drive was wiped clean, we jumped in to find the answer.

Why so many reviews are showing up in other places — USA TODAY's Elizabeth Weise joins Talking Tech to explain the new trend of syndicating reviews. It's a story of the small guy fighting back against Amazon.

Google Home Max review — Our reviewer Baig joins me to give his impression of the new $399 speaker on Talking Tech.

Thanks for visiting with us again for the weekend tech news roundup. Be sure to check out the daily #TalkingTech podcast on Apple Podcasts, Stitcher, Spotify, iHeartRadio or wherever you listen to podcasts. (Watch the video below for a primer on how to listen in apps, smart speakers, TV and the car.)