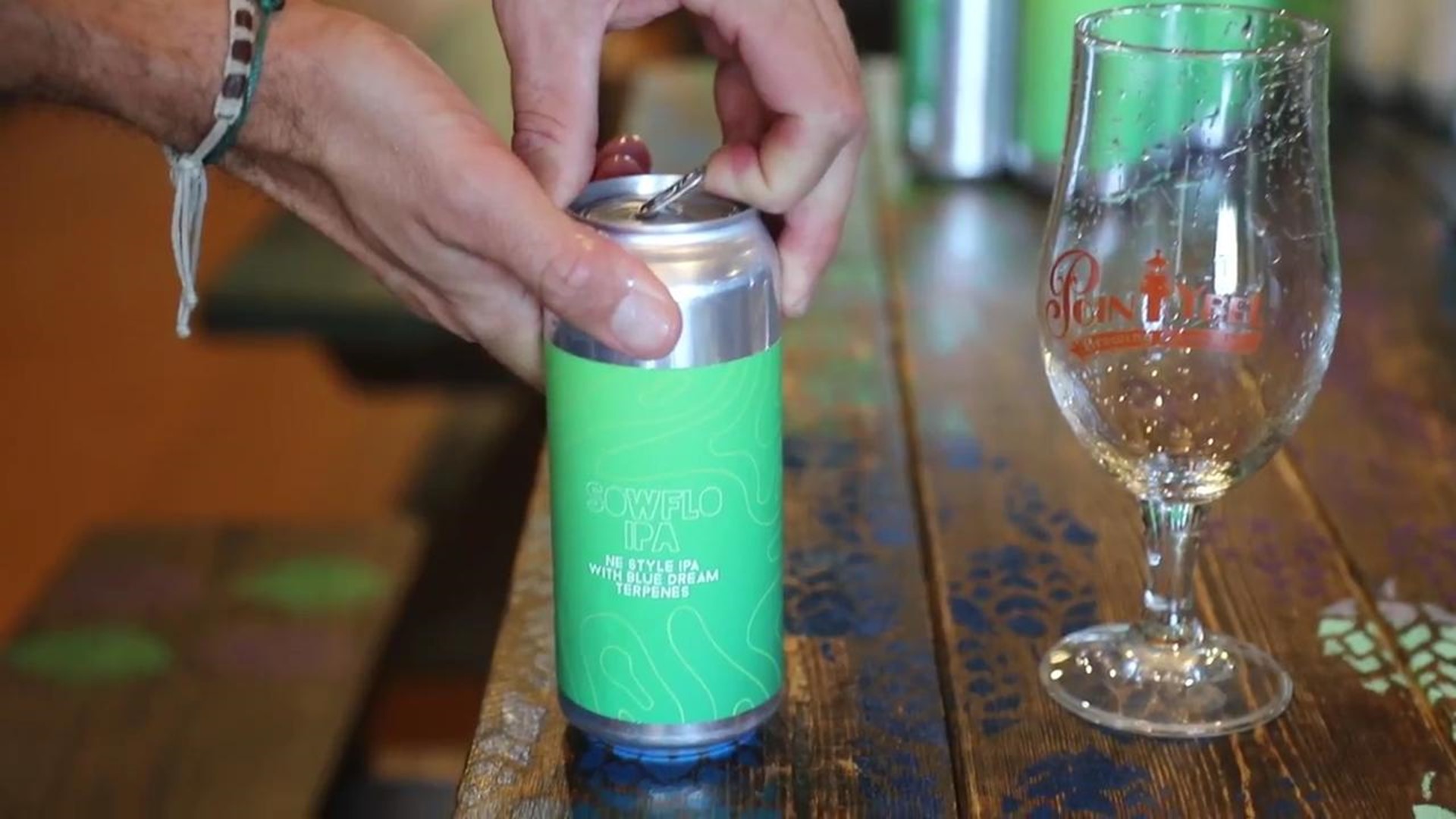 Credit: Amanda Inscore/The News-Press
Point Ybel brewed a specialty beer, in collaboration with the local band SOWFLO, using marijuana terpenes, which are basically the essential oils of the plant that give it its distinct aromas.

FORT MYERS, Fla. — There's a buzz brewing at Point Ybel in south Fort Myers; a new craft beer that won't exactly get you baked — but that smells like it could.

"It's not overwhelming, but it's certainly there."

The beer's herb-like scent comes from cannabis terpenes, the sticky and fragrant oils that give the plants their distinctive aromas.

More: Yes, cannabis-infused beer is a real thing you can drink

More: Is the best marijuana investment a beer stock?

Point Ybel doesn't like calling the new IPA a marijuana-beer. Even though it does, technically, contain cannabis compounds, it has none of the plant's mind-altering THC.

"No THC, I can't say that enough," Point Ybel owner Walt Costello said. "The oils just have that piney, citrus quality that really complement the hops."

The trend of infusing cannabis oils into a craft beer has been gaining steam across the country.

In August, California-based Lagunitas Brewing Co. released its limited-edition SuperCritical IPA infused with cannabis terpenes, according to beeradvocate.com. In November 2016, Oregon's Coalition Brewing released its first of a line of beers infused with CBD, or cannabidiol, THC's non-psychoactive cousin which is believed to still offer medicinal and therapeutic benefits.

In November, Devour Brewing Co. in Boynton Beach released some of Florida's first cannabis-infused beers with its Apricot Haze Berliner-Weisse and Florida Thunder IPA, both of which are infused with terpenes according to a southflorida.com report.

Several breweries in Colorado, where recreational cannabis is legal and readily available, have crafted beers infused with CBD, terpenes and hemp. The state paved the way for cannabis-infused beers in 2015 when Dude's Brews in Aurora found a legal, water-soluble hemp oil that it could infuse into its brews. Dude's released its Indica and Sativa IPAs later that year.

And the big (well, bigger) guys are getting in on the action, too.

The brewers at New Belgium Brewing Co. in Fort Collins, Colo., are on the brink of releasing The Hemporer, a craft beer set to be unveiled nationwide April 2 that New Belgium has trademarked as an "HPA" (as opposed to IPA) for its unique mix of hops and hemp. The Hemporer will be available on draft at select bars in April and in bottles on store shelves in May.

Weisberg pointed out that hop plants and hemp plants are close cousins, both belonging to the family cannabinaceae. And both plants produce terpenes.

"We add the cannabis terpenes after the brewing process to retain as much of the aroma and flavor as we can," Weisberg said.

He purchased Blue Dream terpenes, a cross between Blueberry indica cannabis plants and Haze sativa, from a producer in Oregon.

Point Ybel's first batch of SOWFLO IPA, named for the rock-reggae band that frequently plays at the brewery, sold out quickly after its release on St. Patrick's Day. Another batch is planned for Point Ybel's 4/20 Reggae Party on April 20.

And Weisberg has another cannabis-laced beer in the works, Lemon Haze, a terpenes-infused imperial sour made with Meyer lemon zest that the brewery plans to release May 15.

"It's a natural pairing," Weisberg said of cannabis and hops. "It just works."