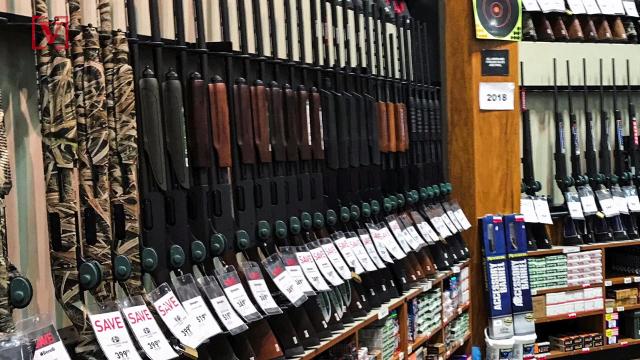 Credit: Scott Olson, Getty Images
A sign hangs outside of a Dick's Sporting Goods store on February 28, 2018 in Chicago, Illinois.

BATTLE CREEK, Mich. — Dick's Sporting Goods again is facing a lawsuit over its decision to not sell firearms to anyone younger than 21.

At 18, Tristin Fulton, of Battle Creek, Mich., can vote and drive. He just can't buy a firearm from any Dick's Sporting Goods store.

Fulton, a Pennfield High School senior and son of Freedom Firearms co-owner Jared Fulton, filed a lawsuit against the retail giant in Oakland County (Mich.) Circuit Court on Tuesday for refusing to let him buy a shotgun because of his age.

Dick's stopped selling firearms to anyone under 21 on Feb. 28, citing the Feb. 14 school shooting in Parkland, Fla., that left 17 students and educators dead as a reason for its decision.

"I'm 18," Fulton said Thursday. "I'm legally allowed to purchase a firearm, and I should have been allowed to.

Credit: Provided by Jim Makowski via Battle Creek (Mich.) Enquirer
Tristin Fulton, 18, is suing Dick's Sporting Goods for refusing to sell him a firearm. In February 2018, the sporting goods store raised the minimum age to buy a gun to 21.

"By denying me my right to purchase a firearm that day, they violated the Elliott-Larsen Civil Rights Act," he added.

Fulton tried to buy the shotgun in Troy, Mich. Dick's Sporting Goods did not respond to a request for comment Thursday.

Dick's is not the only retail giant under the gun for raising the minimum age for buying a firearm from 18 to 21.

Tyler Watson, a 20-year-old Oregon man, sued Walmart and a Field & Stream store, owned by Dick's, after he was not allowed to buy a .22-caliber rifle because of his age.

Watson tried to buy a firearm at Field & Stream four days before the retailers announced their new policies and about a week later from Walmart. He was turned away both times.

Dick's also stopped selling assault-style rifles, also referred to as modern sporting rifles. It had already removed them from Dick's stores after the Sandy Hook school shooting in Connecticut in December 2012, but removed them last month from its 35 Field & Stream stores.

"We support and respect the Second Amendment, and we recognize and appreciate that the vast majority of gun owners in this country are responsible, law-abiding citizens," Dick's said in the statement. "But we have to help solve the problem that’s in front of us. Gun violence is an epidemic that’s taking the lives of too many people, including the brightest hope for the future of America — our kids."

March 1: Kroger: No more gun sales at Fred Meyer stores unless you're 21

Feb. 28: Walmart bans gun sales to anyone under 21 after Parkland, Florida school shooting