Wounded Bremerton veteran training to be a firefighter

At age 37, retired Air Force Tech Sergeant Dan Fye is pursuing his dream of becoming a firefighter, after losing part of his leg in Afghanistan. 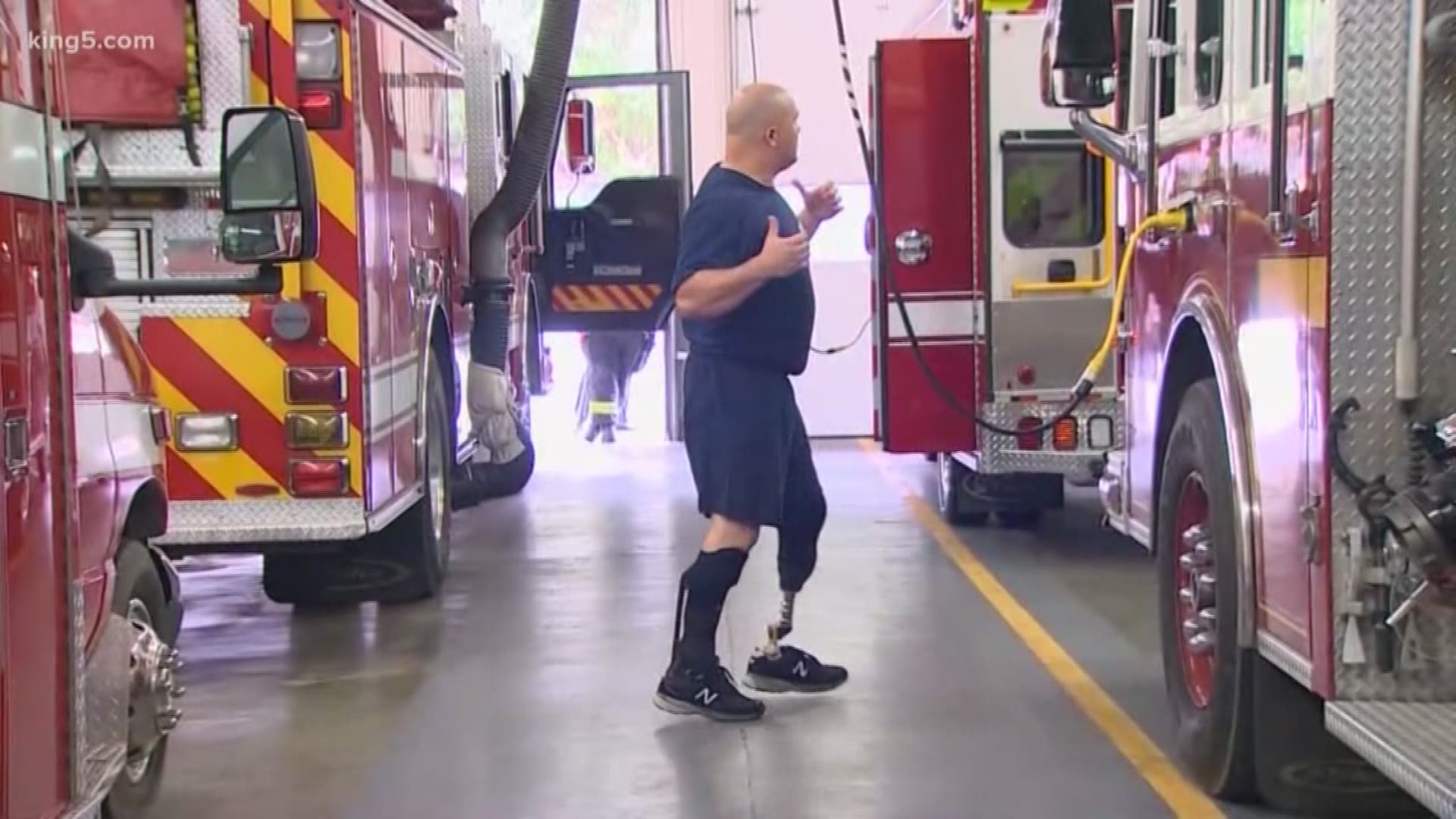 At age 37, retired Air Force Tech Sergeant Dan Fye is pursuing his dream of becoming a firefighter, after losing part of his leg in Afghanistan.

Fye has had his sights set on firefighting since he was a boy, but his focus shifted after the terror attacks on Sept. 11, 2001.

“That took me in a whole different path in my life,” he said.

Fye wanted to be an Air Force firefighter, but was recruited to the Explosive Ordnance Disposal unit.

“It's basically the military bomb squad,” Fye said. “In Iraq and Afghanistan, we’re the ones who go in and deal with all of the IED’s [improvised explosive devices].

It was during his fourth deployment that Fye’s life took another turn. On May 27, 2011, during a mission with the U.S. Army in Afghanistan, he stepped on an IED. In the explosion, he instantly lost his left leg below the knee. His right leg was severely damaged. Fye was airlifted to a combat hospital at Kandahar Air Field where he immediately went into surgery.

“I woke up, looked down, and saw that my left leg was gone, and something wasn’t right with my right leg. But I was alive and thankful to be going home to my family,” he said.

He eventually transferred to a military hospital in San Antonio, Texas where he went through more surgeries for limb salvage on his right leg. He now wears a prosthetic on his left leg and a brace on his right leg.

After two years, Fye was able to walk again without assistance. He did another year of physical therapy before he medically retired from the Air Force and moved back to Washington state for a fresh start.

“I realized it was really time to try something again,” Fye said. “My wife was like ‘I think it's time you go after firefighting."

In March, Fye set up a meeting with Central Kitsap Fire and Rescue. He met with volunteer coordinator Captain Kevin Goodwin.

“Dan walked into my office and he told me his story. I was incredibly humbled because here is a man who has literally given a limb for his community and his country. Now he wants to give more,” Goodwin said.

The two had a candid discussion about Fye’s physical limitations and how those might affect Fye’s role as a volunteer.

“If you're trapped in a burning house, it doesn't matter who is coming to rescue you. They have to be able to do the job,” Goodwin said.

Fye started showing up to drill. He learned how to use different pieces of equipment like pumps and the water tender. He also took an ability test to determine if he could physically meet the demands of a firefighter.

Fye was later selected to attend the South Sound Fire Academy, a volunteer training course on Vashon Island. He is about halfway through the 22-week course and is hopeful to graduate on November 17.

“So far, everything that's been put in front of me, I've been able to do. I've found a way to either do it just like everyone else or do it slightly differently, and still get the same job done,” he said.

Fye needs to demonstrate that he can meet the industry standard of what it takes to be a firefighter. If he graduates, he’ll have a certification that indicates to other departments that he is physically able to perform essential job tasks at fire scenes.

Fye is not sure how far he’ll be able to take this opportunity, but he's taking it one step at a time. For now, he's focused on getting through the academy. Then, there is EMT school in February. More professional training is also a possibility.

Whatever the future holds, he'll keep pushing himself to his fullest potential. It may just lead him to a new career.

“A few years ago, I don't know if I would have seen this happening. To start at age 37 and to start realizing the dream that I had from when I was 13 or 14 years old, and actually making it happen, it's a pretty amazing experience.”