A home security camera caught the woman taking the dog's collar and leash off before walking it into the park. She then ran back to her car, leaving the dog behind. 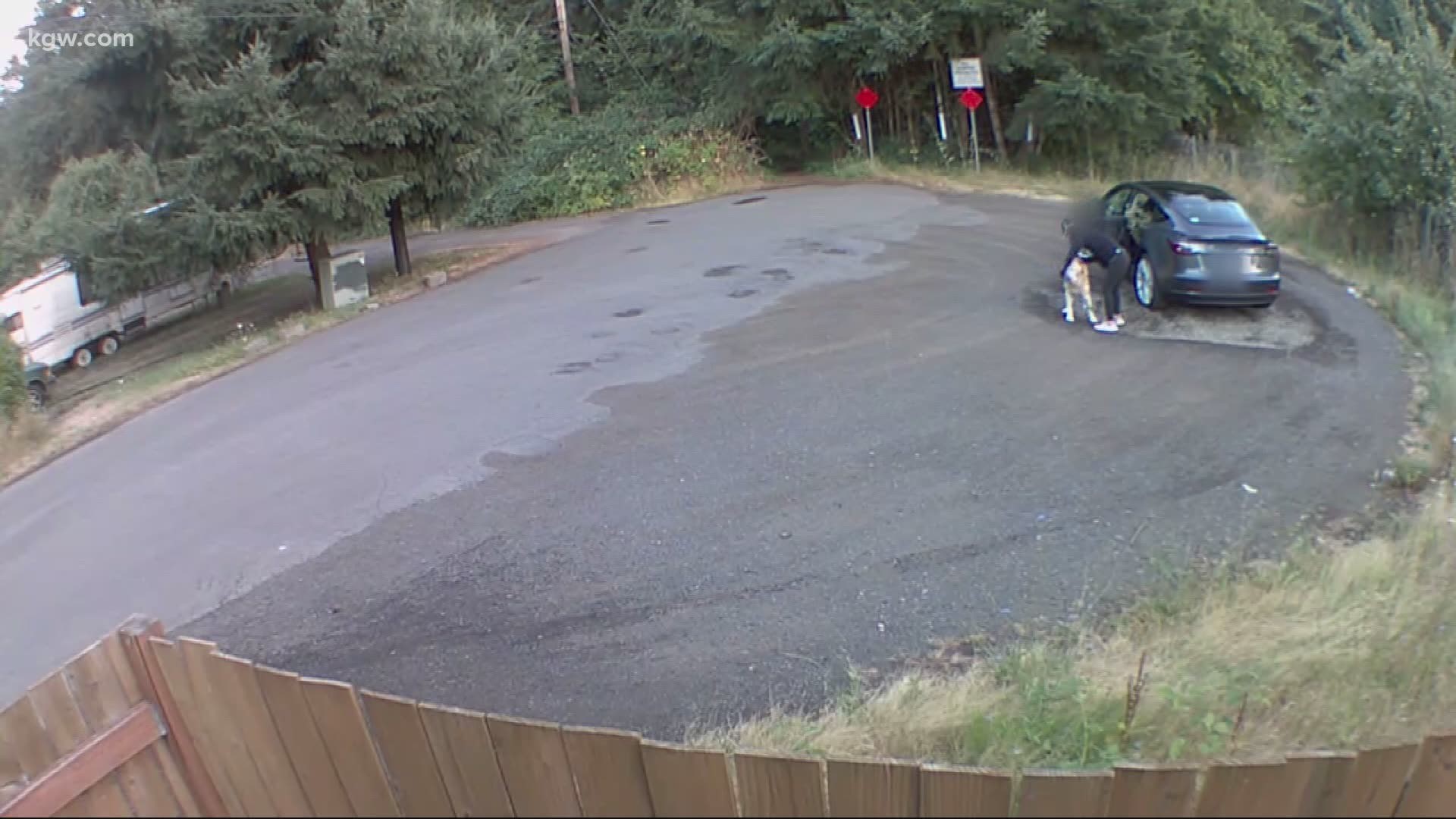 VANCOUVER, Wash. — A woman seen on video leaving a dog at a Vancouver park Thursday night will be cited under animal cruelty laws, according to a spokesperson with Clark County Animal Control.

Henry is a 13-year-old Labrador and has been turned over to the Southwest Washington Humane Society. The humane society said potential adopters should keep an eye on their website for updates on Henry's availability.

“Animal Control Officers identified the woman in the video and interviewed her this afternoon. She has cooperated with authorities and will be cited under Clark County animal cruelty laws.”

Word of Henry being abandoned spread through the Vancouver and Portland community after a home security camera caught the woman leaving Henry. The camera was recording on the north side of Orchards Community Park in Vancouver around 8:20 p.m. Thursday when a dark colored sedan drove into view.

A woman with shoulder length brown hair and wearing a hat got out of the driver's seat and let the dog out of the back seat of the car. She took the collar and leash off and then got back in to drive off. But before closing her car door, she opened it again, walked the dog into the wooded park and ran back to the car. That's when the video stopped recording.

It was Alyssa Ott's security camera that captured the whole thing.

"I couldn't believe what I was seeing," said Ott. "I saw her let the dog out, take the leash and the collar off and got back in. I thought she was going for a walk at the park and then she corrals the dog in the park and runs on out."

Ott said she's watched plenty of cars drive into the pullout on her property near the trail to the park.

"We see some crazy things, but most days it's just people turning around and going about their day," she said.

"[It's] super frustrating for us because, not only is it egregious what she did, it also opens the door for so many other pets that are actually lost or have been stolen or otherwise to have that circumstance of the finder thinking, 'well somebody dumped it,' so they keep it," Jakubs said.

Orchards Park sits right off of I-205 on the east side of Vancouver. Jakubs said what the woman did was not only illegal, but put the dog in danger.

"He very well could've ended up hit and killed on I-205," said Jakubs. "She put that dog in imminent danger."

Jakubs said the one thing that stands out to her in the video is the way the woman dropped off the dog.

"What she did when she took the collar off and pet the dog and threw the collar into the vehicle is a sign for me it's likely her dog and she didn't want there to be a way to trace it back to her," Jakubs said. "Somebody that's just going to dump a dog would have just left, they wouldn't have thought twice about getting back out and making sure he goes into the park."

The dog, whose name is Henry, has been turned over to the Southwest Washington Humane Society. Henry is a 13-year-old Labrador. The humane society said potential adopters should keep an eye on their website for updates on Henry's availability.

If you do find a lost pet or animal, animal control said to use the power of social media first to try and find the owner or turn the animal over to the humane society.

"There are just so many other options, so I can't even fathom why someone would even select this one," Jakubs said.

Dog dumped by his owner at Orchards Park in Vancouver, WA

This woman thought the best way to get rid of a dog, was to take him to Orchards Park in Vancouver, WA tonight and leave him there to watch her drive off in her Tesla with Oregon Plates. If you recognize this woman, her Tesla, or her dog, please contact us immediately. 833.360.7293. The dog is an older yellow lab. If you know a woman that drives a Tesla with Oregon Plates, who likes to wear spandex pants and owned a Yellow Lab, please, contact us PRIVATELY with any information. **************All, please know the dog is safe and not available for adoption at this time. This dog will not be available pending an investigation into what happened. We know this tugs at our heartstrings, but please know he is safe and being cared for. We will do our best to update if/when he becomes available. **We have the dog, the dog is safe.***