'It was chaos': Witnesses describe deadly shooting in downtown Seattle

One woman is dead and seven other people were hurt in a shooting in downtown Seattle Wednesday evening. 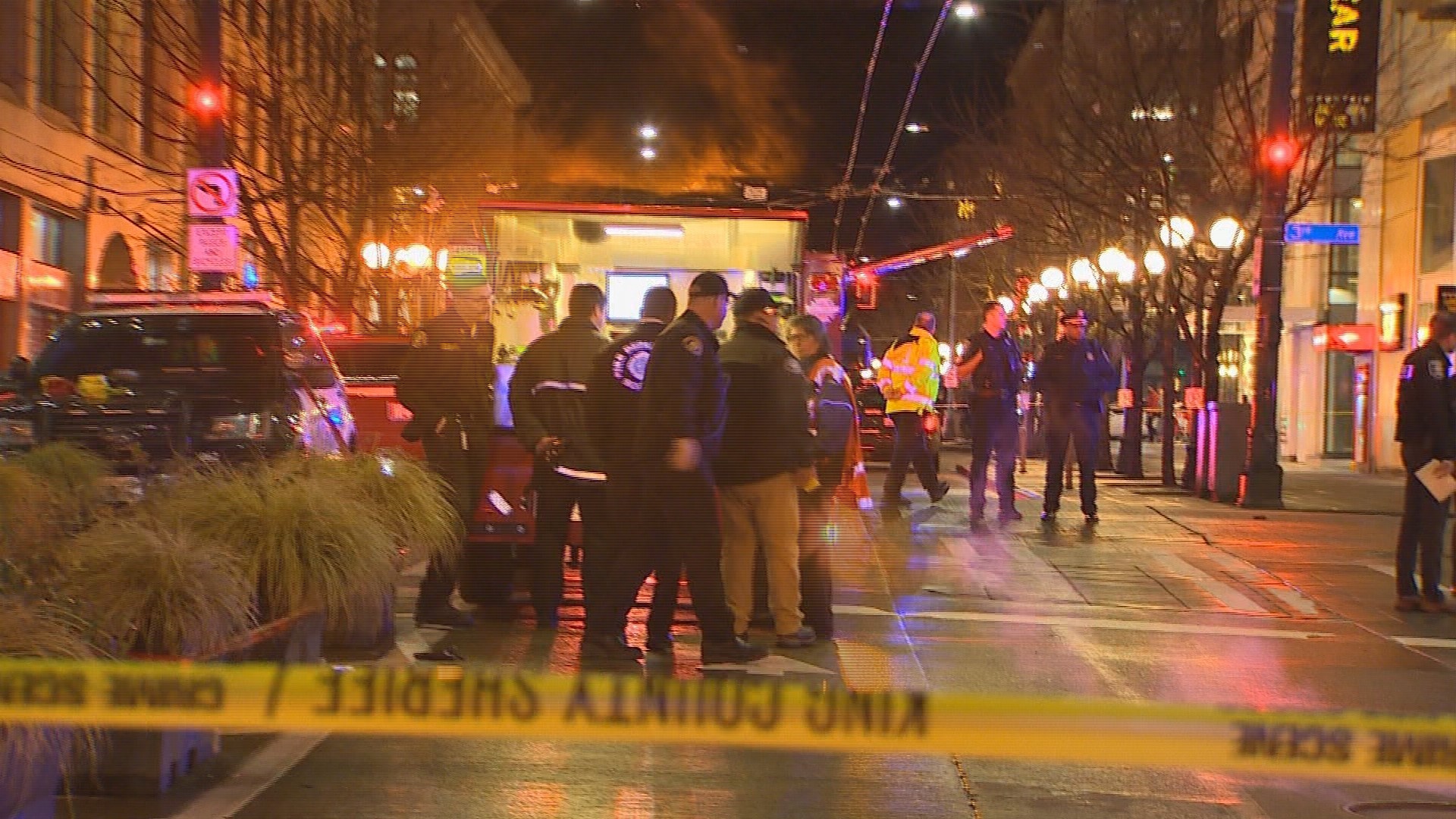 SEATTLE — One woman was killed and seven other people were hurt in a shooting in downtown Seattle around 5 p.m. Wednesday. A 9-year-old boy is among the wounded.

Seattle police said the violence stemmed from a fight between "two or more males" that shot at each other and fled the scene.

Three victims remained at Harborview Medical Center early Thursday morning. A 55-year-old woman is in serious condition. A 9-year-old boy and 32-year-old man are both in satisfactory condition. Four other men, ages 21, 34, 35, and 49, were treated and released, according to hospital officials.

Douglas Converse, a man who was at the scene, said he was 10 feet from going into the light rail station when he heard several pops. He noticed several people down on the ground as he was trying to get his bearings about what was happening.

"It feels alarming. I just saw terror on people's faces as they were running from the light rail station into any shelter they could and hiding behind cars. It was chaos," he said.

Converse said he ran down to the light rail station to notify police officers and security of the situation.

People at the scene ran into nearby stores and restaurants for safety after hearing the shots.

Alex Bennett, who was nearby when the shooting happened, was in a coffee shop when she heard a flurry of gunfire.

“Everyone just went to the ground, and as we were looking out the windows, people were running,” she said.

Bennett said she is a former nurse and rushed out to help one of the victims who had been shot.

“I was helping the guy who had been shot in the leg and texting his wife for him and trying to keep him calm,” Bennett said.

She said police responded and put a tourniquet on the man's leg and he was taken to the hospital for treatment.

"I've never experienced anything like this in my life," she said. 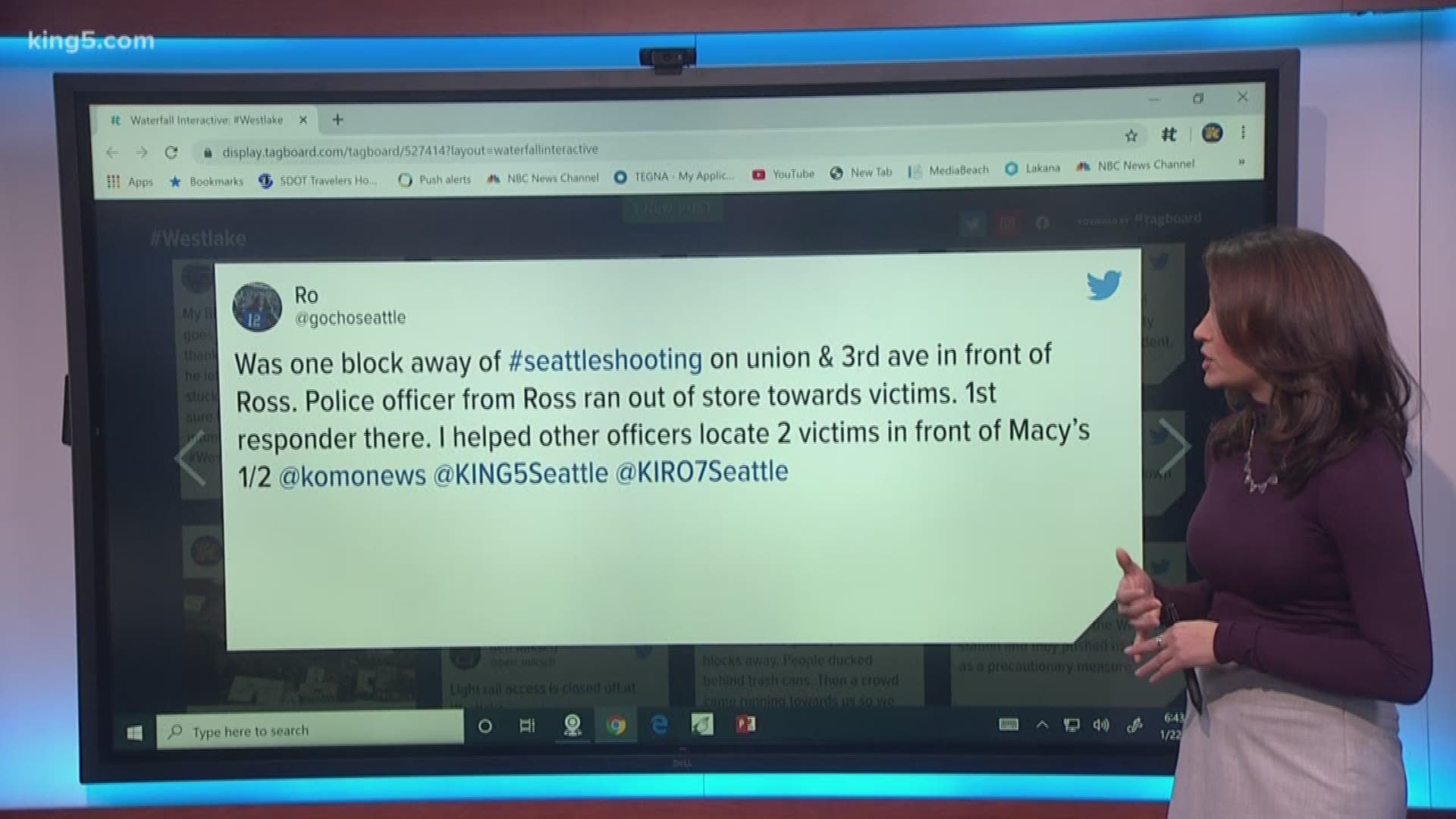 Coffei Petty and his wife work near Westlake Park. His wife, who works at Nordstrom, was placed under lockdown during the active incident.

"The fact that it can happen anywhere, especially in such a highly-populated area, is really concerning," Petty said, speaking to KING 5 on the phone.

Petty initially thought it was a truck backfiring, but then saw several cop cars blow through the area.

"There are certain areas that are not safe, so you kind of have to keep your head on a swivel," Petty said.

For about an hour, traffic was stopped through that area of downtown, light rail was shut down, and several stores were placed on lockdown.

“This is a part of the cause -- drugs, mental illness, it’s all a part of it. And everybody else has got to navigate it. We got to navigate this. Most of the people on the planet I come across, it’s not part of their problem. This is a small problem but it has a big consequence and people die. For nothing. There’s gotta be a damn solution to this. There’s gotta be. We’re intelligent people, this is America, man. We go to the moon, we do incredible things. We can’t solve this problem and there’s something wrong with that," said one man who was at the scene.

KING 5's Michael Crowe was at a press conference for another shooting in Seattle's Belltown neighborhood about 90 minutes prior. He heard the gunshots from blocks away.

If you have any information about the shootings, call 206-233-5000 or share photos or video evidence with police at this link.