Fighting wildfires gives some a second chance at life

Fighting wildfires is grueling and dangerous work. So what motivates people to sign up? 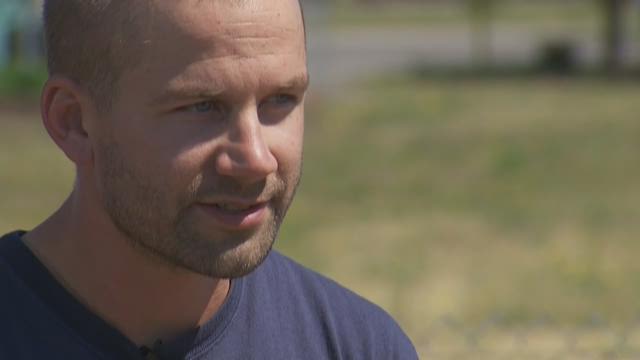 Among the two hundred men and women learning wildland firefighting skills in Rainier Monday, most were college students looking for summer work.

Few of them have the conviction of Tobin Von Ditter.

"This is my dream, I'm not going to take no for an answer," he said.

The 31-year-old served 22 months behind bars.

"A bunch of stupid decisions revolving around drug use," Von Ditter admitted.

How did he go from felon to firefighter? Von Ditter worked on a firefighting work crew while he was incarcerated. And in his words, he "got bit by the bug."

"Doing what I've done in my life, it's always been about the rush. Being able to do something good and help people and still feel that rush? It's second to none to me," he said.

He's not the only one trying to turn over a new leaf.

"I've been to prison four times and in everyone's eyes including my own, I was a lost cause," said Rian Struckman.

What motivates 38-year-old Struckman is the physical challenge of the work. You have dirty hands but it's clean money.

"I'm covered in sweat working hard, and people are looking at me in awe, like how is this guy still going?" Struckman said. "That's kind of what drives me. It's rewarding."

They sat in a class for crew boss training as part-time firefighters for Cowlitz County District 5. Neither of them has violent or sex crime convictions. Their chief hired the pair after supervising them on a private contract crew last year, impressed by their work ethic.

"These guys got it dialed," said Chief Victor Leatzow. "Yeah. They made a mistake."

"He gave me his card and stay in touch and I took that to heart," said Von Ditter.

Both men remember the words of encouragement.

"Don't be afraid to dream big. It's possible," said Struckman. "That's so refreshing to hear."

By fighting wildfires this summer, they can affect change, for the communities they serve and in their own lives.

"Less than two years ago I was in prison, now I'm with the district. If that's not poetry in motion I don't know what is," said Von Ditter.