The S-503 Fire started Friday evening on the north side of the Warm Springs Reservation; its perimeter is now just 2 miles east of Highway 26 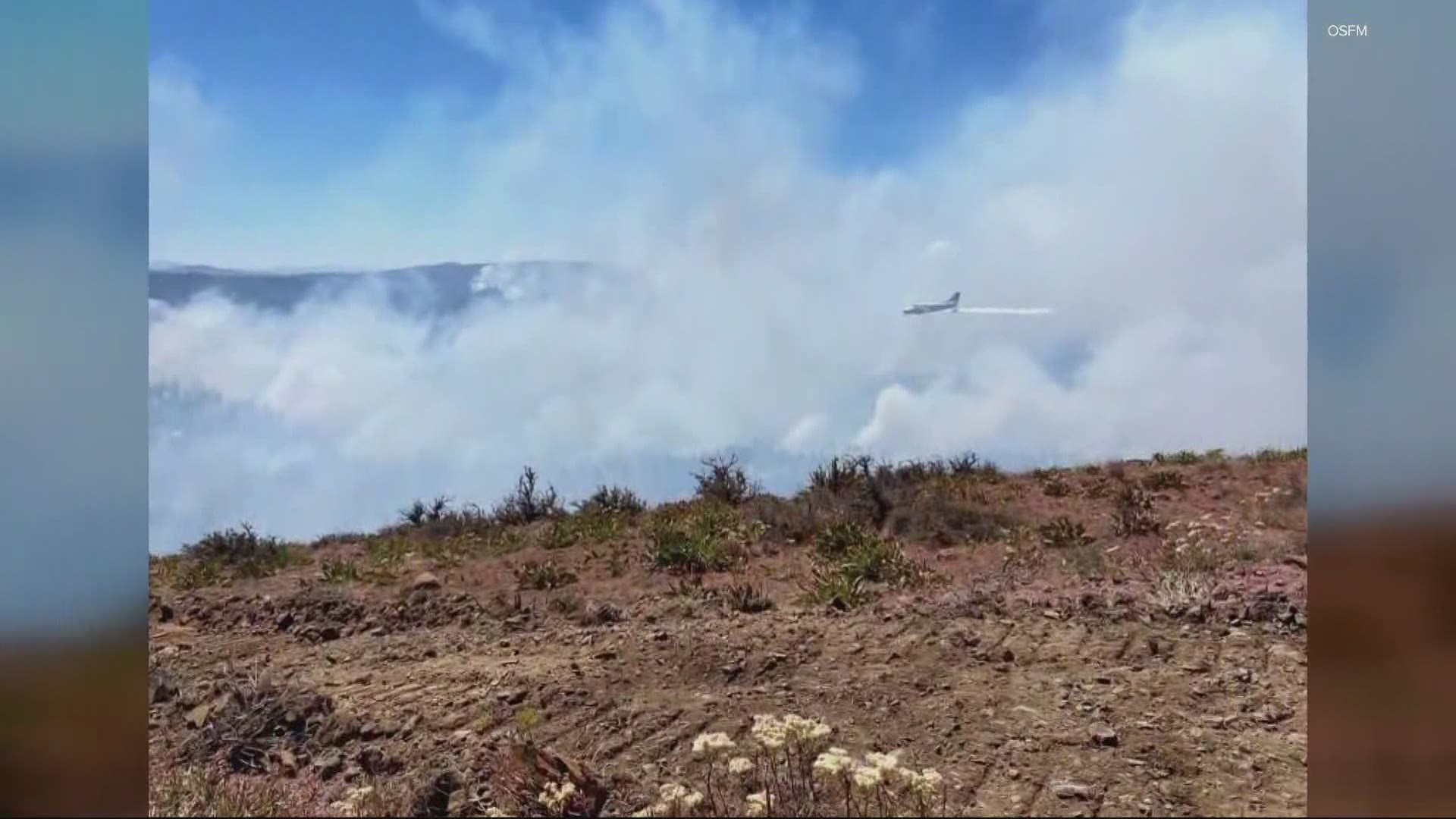 WARM SPRINGS, Ore. — People in small, rural Wasco County communities like Pine Grove and Walter’s Corner were again warned Monday they should be ready to leave their homes at any moment. The wafting plume of smoke billowing up over the hillside to the south is a constant reminder. It’s also eerily reminiscent of how the worst stretch of 2020’s deadly season started.

The wildfire southeast of Mt. Hood on the Warm Springs Reservation has burned about 6,201 acres and is officially 10% contained as of Tuesday morning.

A level 2 "Get Ready" evacuation order is in place for Walters Corners and the community of Pine Grove.

A Confederated Tribes of Warm Springs Wildland Fire spokesman said Sunday night the fire perimeter was now only 2 miles from Highway 26. Winds moved the fire away from structures and homes Sunday.

“This is nothing like last year. This is way simpler, way less risk,” said Eugene Walters, chief of the Juniper Flat RFPD. “ But we're not taking any chances. We want to be ready if something happens.”

Walters said Sheriff’s deputies had been going door to door throughout the weekend, making sure people knew the S-503 fire had grown rapidly over the weekend. After first sparking, authorities, believe Friday on the Warm Springs Reservation, dry conditions and changing winds had fueled rapid growth. As of Monday morning, more than 6,200 acres had burned just southeast of Mount Hood. There were no reports of injuries or structures burned.

Initially, local crews had been tapped to tackle the flames. Over the weekend, it became clear they were outpaced.

Monday, they turned control of the fire over to the Northwest Incident Management Team 8, a regional task force with state and federal resources at their disposal. That includes the U.S. Forest Service and the Bureau of Land Management.

Incident commanders set up headquarters, which included dozens of tents for firefighters, Monday at the Tygh Valley Fairgrounds. Overall, they had roughly 300 crews out attacking the flames.

Incident commander Kevin Stock noted crews were confident they’d be able to make progress containing the fire soon. That said, the fire’s progress is proof of just how dry trees and plants are.

“It’s reason for alarm in the fact that a fire got up and moved as well as this one did this early in the year,” Stock said. “In a normal year, not a real drought-stricken year, we probably would not get the movement through the timber that we are currently getting.”

The S-503 Fire is believed to have started Friday around 5 p.m. off Highway 216, on the north end of the Warm Springs Reservation.

No structures have been burned and no injuries reported, the CTWS spokesman said.

The fire is visible from Mt. Hood Meadows ski resort. The resort posted a timelapse of the fire's progression over the weekend.

Today's activity of the Pine Grove fire from about 4:30 AM up to 2 PM. It's about 30 miles from our permit area - captured on our Toyota Vista Mt. Cam. You'll see it in the upper left hand corner until we zoomed in for a closer look. https://t.co/7ZLNFrd9wt pic.twitter.com/EzaiWpK7c1

Authorities said that the temperature and low humidity will play a part in elevating fire weather concerns through Monday.

We will continue to follow this developing story. Check back for updates.

RELATED: Explainer: What's behind the heat wave in the American West?