Bonney Lake police said some residents are being allowed back into their homes, if only to grab medication, but many homes are still under Level 3 evacuations. 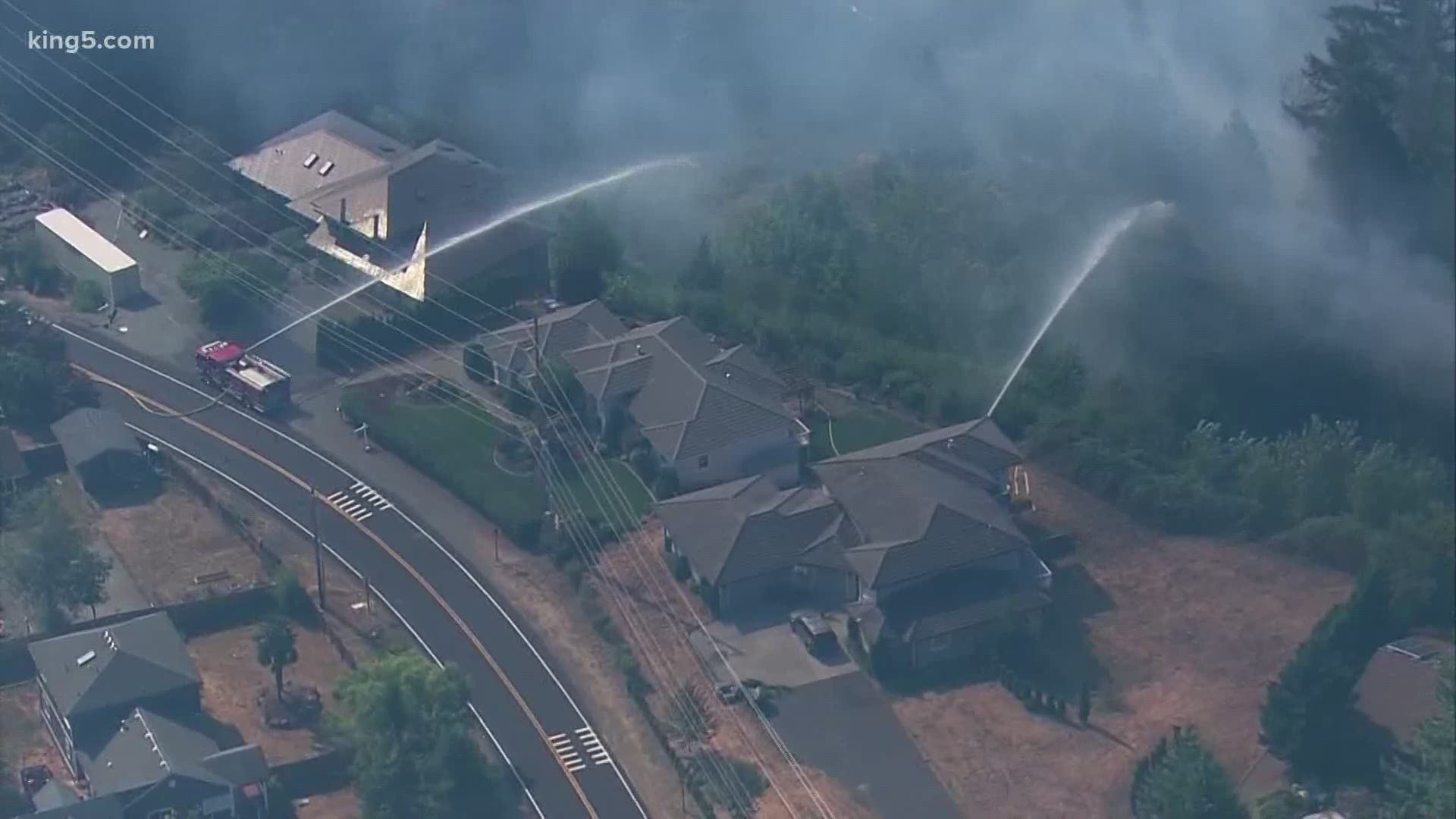 SUMNER, Wash. — A wildfire burning alongside State Route 410 between Sumner and Bonney Lake is starting to slow down, according to East Pierce Fire & Rescue. Some residents are also being allowed back into their homes.

The Sumner Grade Fire, which started late Monday, Sept. 7, continues to burn, but more slowly than in recent days. Fire crews have been working around the clock to keep the fire contained. The fire has burned approximately 800 acres and is at 20% containment, officials said.

The Washington National Guard said Thursday its helicopter crews have dumped 125,000 gallons of water on the Sumner Grade Fire so far.

The fight isn’t over in Sumner, though fire crews do have the upper hand.

Bonney Lake police said Thursday evening some residents affected by the fire are being allowed back into their homes in a phased approach, but there are still some Level 3 evacuation areas. For more on evacuations, click here.

At least four structures were destroyed, but so many more were saved.

“I was shocked they saved the house, I really was. God bless those guys," resident Allan Burton said of the fire crews. He was allowed home to retrieve some medication on Thursday. "I'm feeling real lucky. Feeling really lucky.”

On Thursday, the Washington State Department of Transportation (WSDOT) said due to downed trees and power lines, SR 410 will remain closed between mileposts 11.4 and 13.3. Travelers can detour using SR 165 and SR 162. Learn more here.

For most of the afternoon Thursday, smoke continued to billow over south Pierce County, but luckily nothing like what residents saw in the beginning.

"Sirens blaring down the street, sheriff banging on the door saying you have 10 minutes to get out of here," explained Christie Johnson. The Former KING 5 reporter said the flames came close to her front door.

"Two homes on our street have been lost, numerous homes damaged," she said.

Crews with Puget Sound Energy are working to repair physical and electrical issues caused by the flames. Those issues also caused more problems for students trying to return to online learning this week. 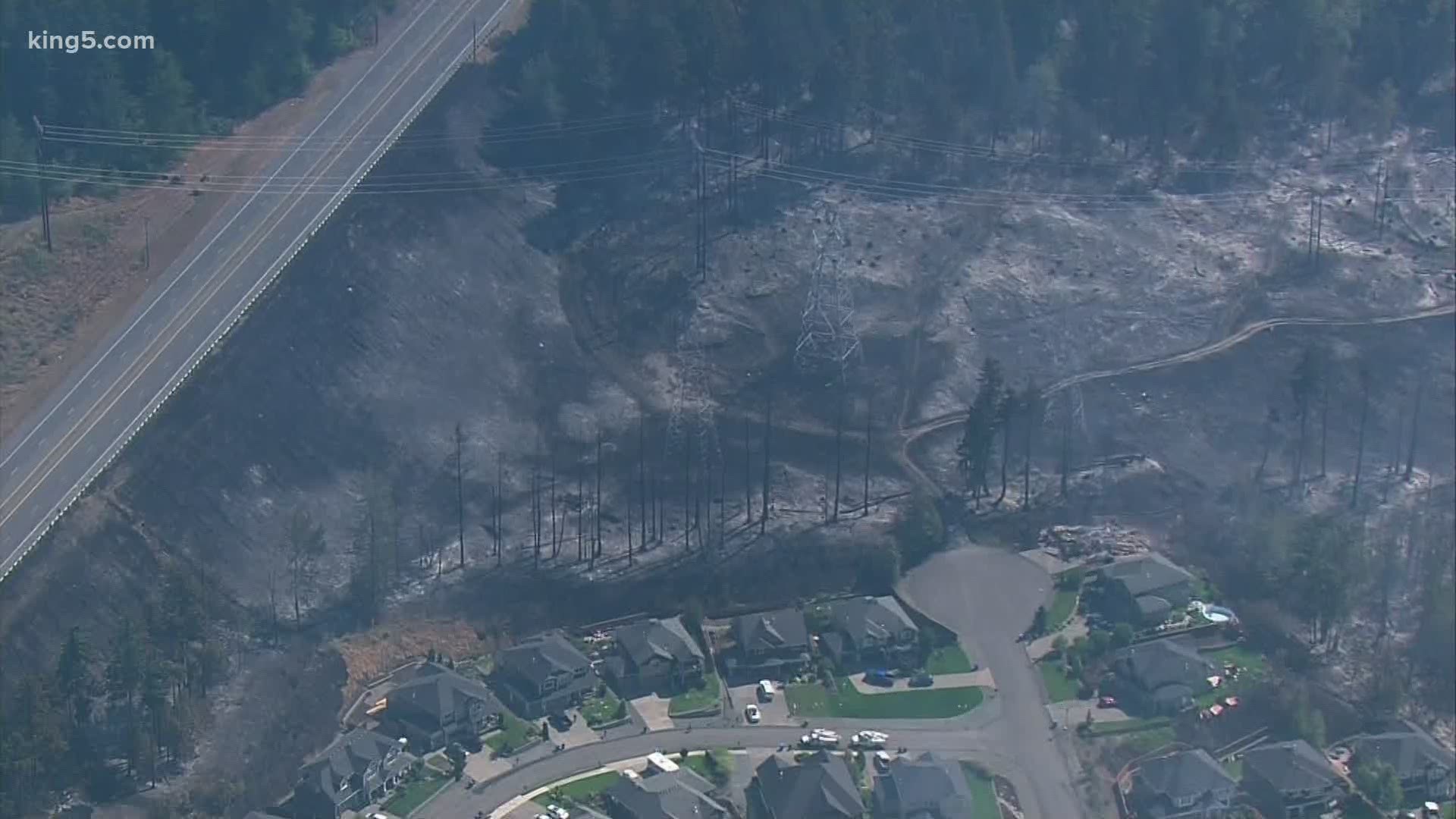 "The kids are out of school and don't have assistance right now," said Charles Davis. "They're very thankful right now."

Davis is among some of the community members that are trying to help each other out during this difficult time.

"Our community is suffering right now, we're just doing our part," he said.

East Pierce Fire & Rescue officials said resources to fight this, and other, wildfires are "extremely taxed" nationally and locally. They said they're struggling to obtain the proper equipment and resources due to the large number of wildfires burning across the state and along the West Coast, and are having to make do with what they have.

Gov. Jay Inslee on Thursday signed a proclamation to allow people impacted by the wildfire damage to get financial assistance.

Want to help those affected by wildfires?

Help those in Washington state and across the country who are affected by wildfires. Donate to KING 5's Northwest Response through Red Cross here: https://www.redcross.org/donate/cm/king5-pub.html/