Smoke from fires burning in California and Oregon is hanging off the coast and affecting air quality in Washington state. 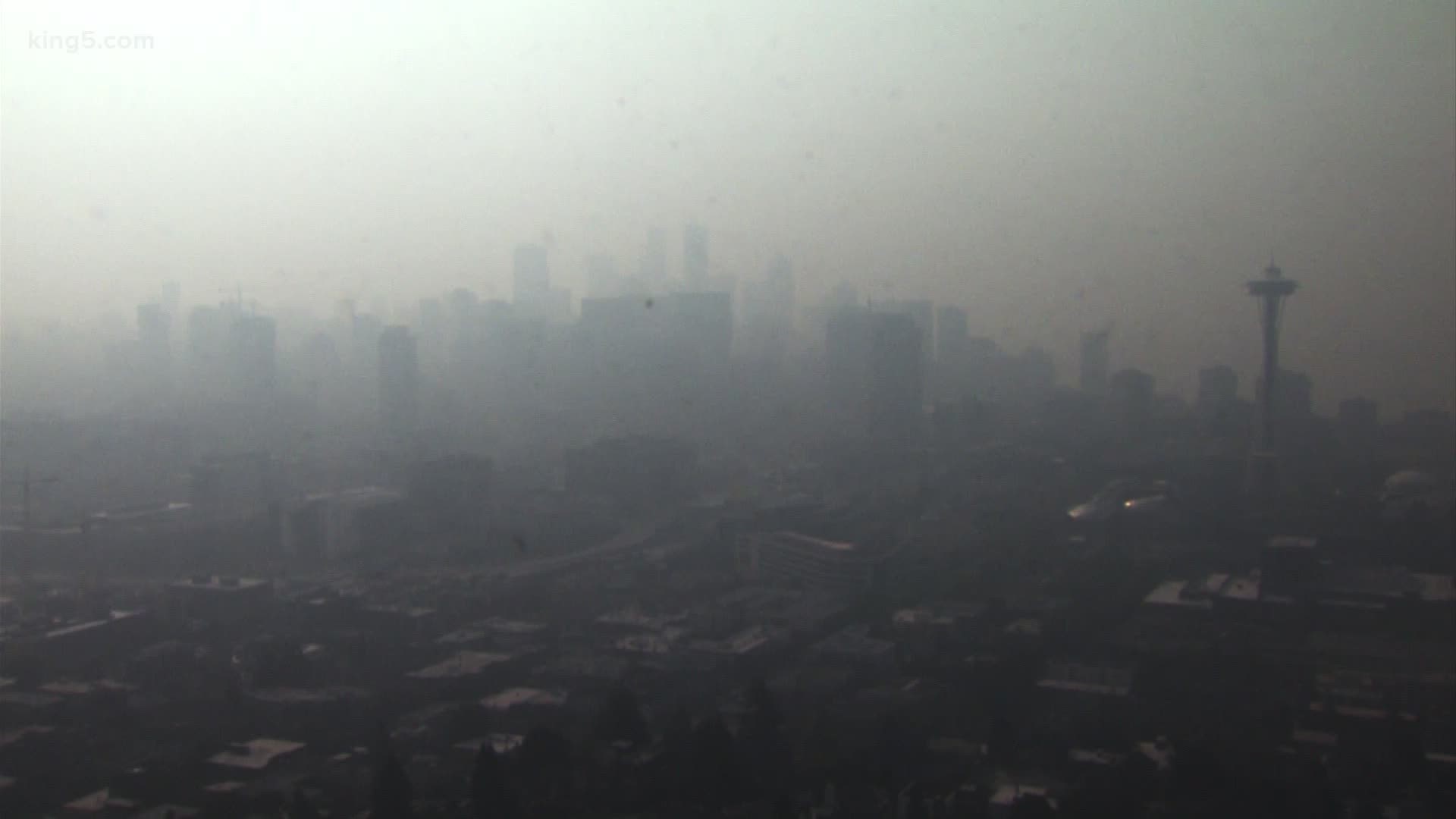 SEATTLE — After historic wildfires in Oregon and California created surreal, smoky hellscapes shared widely on social media, Washington forecasters are predicting a big dose of smoke for Puget Sound and the rest of the state.

The National Weather Service (NWS) said a large blob of smoke from fires in Oregon and California is hanging out of the coast, and pushed inland starting late Thursday into Friday.

“It will probably be the worst Friday night, Saturday morning, but we’ll see some improvement after that,” said Mike McFarland, a meteorologist with the NWS in Seattle.

The Washington Dept. of Ecology predicted the “super-massive” body of smoke will not only impact the southwest corner of the state, but Puget Sound, the Columbia Basin, and as far as Spokane.

By Friday morning, air quality was considered "unhealthy" for King, Pierce, and Snohomish counties in the metro areas. The same goes for Kitsap County and the Olympic peninsula.

Air quality along the coast, around Olympia, and in southwest Washington was "very unhealthy" by 6 a.m. Friday.

You can view the current and forecasted maps of smoke levels here.

“Unhealthy” air can cause problems for even those without conditions that raise their risk, and McFarland said it’s important to take precautions to minimize exposure. Smoke can exacerbate respiratory conditions and even heart issues.

Residents are urged to stay indoors when possible and to keep windows shut.

“I’m an asthmatic, so I’m going to order up another puffer, and later tonight I’ll close my windows and do all the things I did a few years ago when we had bad smoke,” he said.

Back in 2018, several rounds of heavy smoke from wildfires burning in B.C. choked Seattle, blotting out the skyline even just across Elliot Bay. Officials opened smoke shelters to help those with nowhere to escape the smoke, but that practice has not been widely replicated in 2020 because of COVID-19.

The Puget Sound area has already seen plenty of smoke and haze.

Fire across Washington, including in Pierce County, have torched more than 500,000 acres, bringing some smoke to Western Washington earlier this week.

But the National Weather Service says the new issue is predominantly smoke from Oregon and California.

Adding to the perfect storm of pandemic and smoke – research shows the particulate matter in smoke raises your susceptibility to respiratory infections like the coronavirus.

The Department of Ecology wrote that beyond that because symptoms of COVID-19 mirror those of smoke exposure – coughing, wheezing, shortness of breath.

Beyond the health impacts, there’s some worry from business owners that terrible air quality could put a damper on outdoor dining, which was expanded to allow for social distancing during the pandemic.

At Barrels Wine Bar on Mercer Island, Joe Kennedy said they’re waiting to see if they need to bring their chairs inside.

“We’re in a wait-and-see pattern,” he said. “We’re going to make a decision tomorrow, rather than making one tonight.”

They still have a handful of seats spaced out inside, but losing the outdoor seating would reduce his capacity. It’s another added complication for business owners in 2020.

“You don’t feel like you’ve been sucker-punched anymore because it’s just the way everybody’s dealing with it,” Kennedy said. “But my philosophy is why complain, everybody is in the same boat. So we’ll do our best to change as we need to.”

The Washington State Department of Health has some tips and guidelines for dealing with wildfire smoke in the time of COVID.