A Red Flag Warning has been issued for all of Central and Eastern Washington through Thursday as a mix of dry and windier conditions will elevate the fire danger. 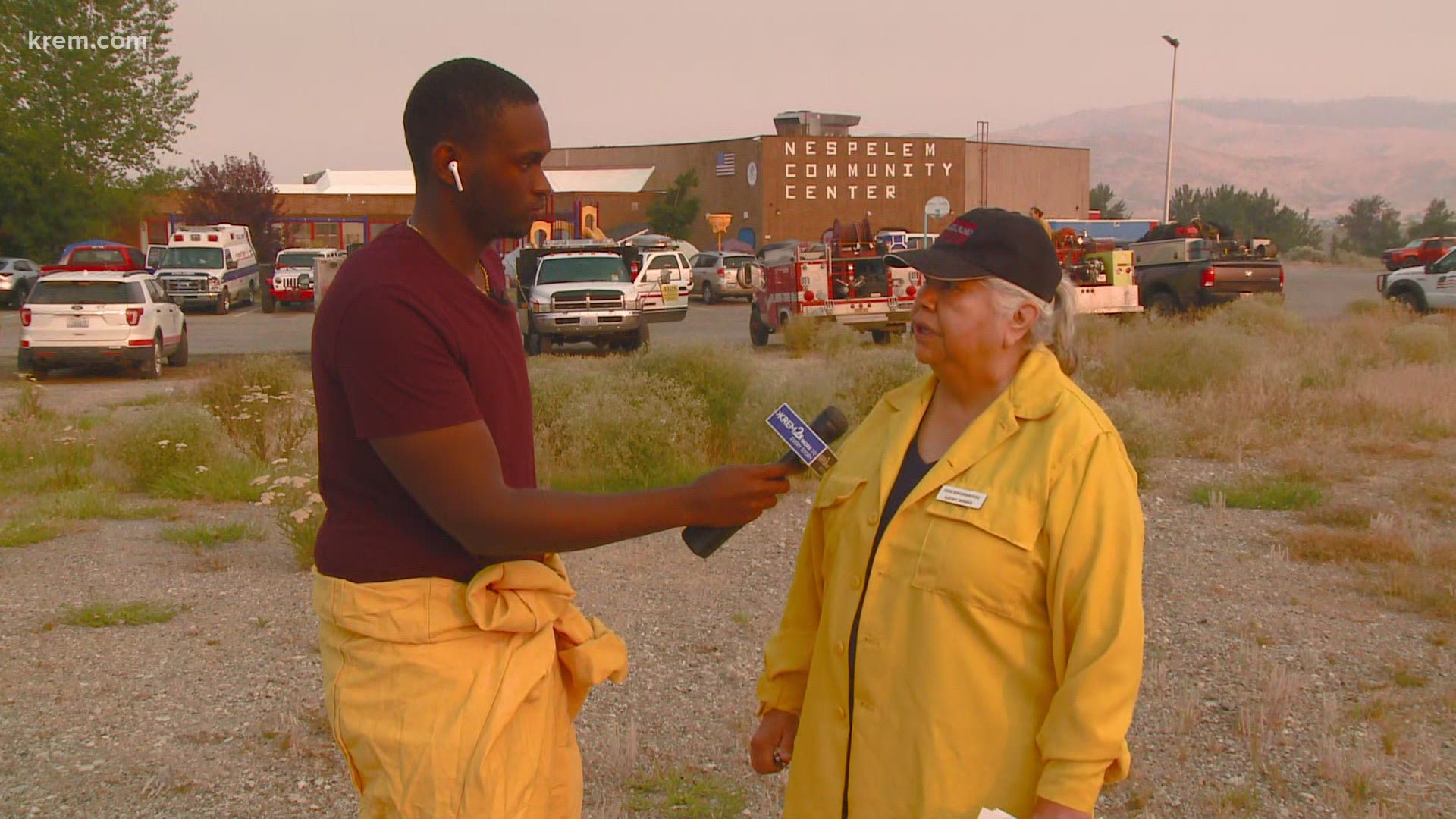 OKANOGAN COUNTY, Wash. — The Chuweah Creek Fire near Nespelem in Okanogan County continues to grow as fire danger increases across the Inland Northwest.

Two wildfires that have combined into one have burned 37,283 acres as of Friday morning, according to Northwest Incident Management Team 12. The fire is 20% contained. The Confederated Tribes of the Colville Reservation declared a state of emergency on Tuesday due to the fires.

Level 1 evacuations are in place for residents of the town of Nespelem as well as the town of Keller, Buffalo Lake and McGinnis Lake communities and the San Poil Valley/Highway 21 corridor from South Nanamkin to the Keller Ferry.

Level 3 evacuations have been reduced to level 2 for residents at Owhi Flats and east of Owhi Lake, as well as residences along Cache Creeks Rd.

Fire officials said the wildfires were started by lightning.

A Red Flag Warning has been issued for all of Central and Eastern Washington through Thursday as a mix of dry and windier conditions will elevate the fire danger to critical levels. This includes the Spokane, Pullman, Moses Lake and Omak areas. The dry conditions aren't a surprise. Relative humidity will drop to as low as 8% in central Washington during the afternoon hours. That combined with gusty winds up to 20-30 mph will create a combination of ideal weather conditions for rapid wildfire growth.

Kathy Moses, Communications Specialist at Confederated Tribes of the Colville Reservation warned of a false social media post in circulation. The post claimed people in Keller, Washington were in danger and needed to evacuate. Wednesday morning. Moses assured that the residents of the town were safe and to check the source of the information they receive.

In a press release, Colville tribal leaders said the reservation is shut down to industrial activities and to the public. The tribe also imposed an Industrial Fire Precaution Level IV general shutdown, which closes all forest roads.

The Federal Emergency Management Agency (FEMA) authorized the use of federal funds to help with firefighting costs, according to a press release from the agency.

The Confederated Tribes of the Colville Reservation and the state of Washington submitted a request to FEMA for a Fire Management Assistance Grant declaration on July 12. The request was approved the next day.

The grant makes FEMA funding available to pay 75% of the State’s eligible firefighting costs under an approved grant for managing, mitigating, and controlling designated fires.

Moses said the structures lost in the Chuweah Creek Fire/Joe Moses Road Fire include seven homes  — four that were unoccupied and three that were occupied  — and seven outbuildings. Resources from the Washington State Department of Natural Resources (DNR) arrived on Tuesday morning to help fight the fire. The fires began burning on Monday evening and are not contained.

Some livestock, horses and wildlife succumbed to the flames in the wildfire or were so badly burned that they had to be put down, Moses said.  There haven't been any reports of people hurt or killed.

The Red Cross has set up a shelter at Coulee Dam High School's main gym. There is also an evacuation center at the Nespelem Community Center at Schoolhouse Loop Road.

There are power outages in the area and all phone lines are down, DNR said on Tuesday morning.

According to Okanogan County Emergency Management, people should be aware of their surroundings and take action now. They said to be cautious of emergency vehicles responding to the fire.

According to Director of Public Safety Sabrina Desautel, all non-essential personnel in Nespelem were on administrative leave Tuesday. In addition, Indian Health Services was closed as well.

Another wildfire called the Keno Fire is burning 25 to 30 acres northeast of Keller, Washington, on Tuesday morning, Moses said. It is 0% contained.

The Summit Trail Fire is burning toward the old Bridge Creek fire burn scar area. It is 10-15 acres in size, according to the Colville Tribes Environmental Trust Department.