Residences near the newly-formed Archer Mountain Fire are under a Level 3 evacuation. 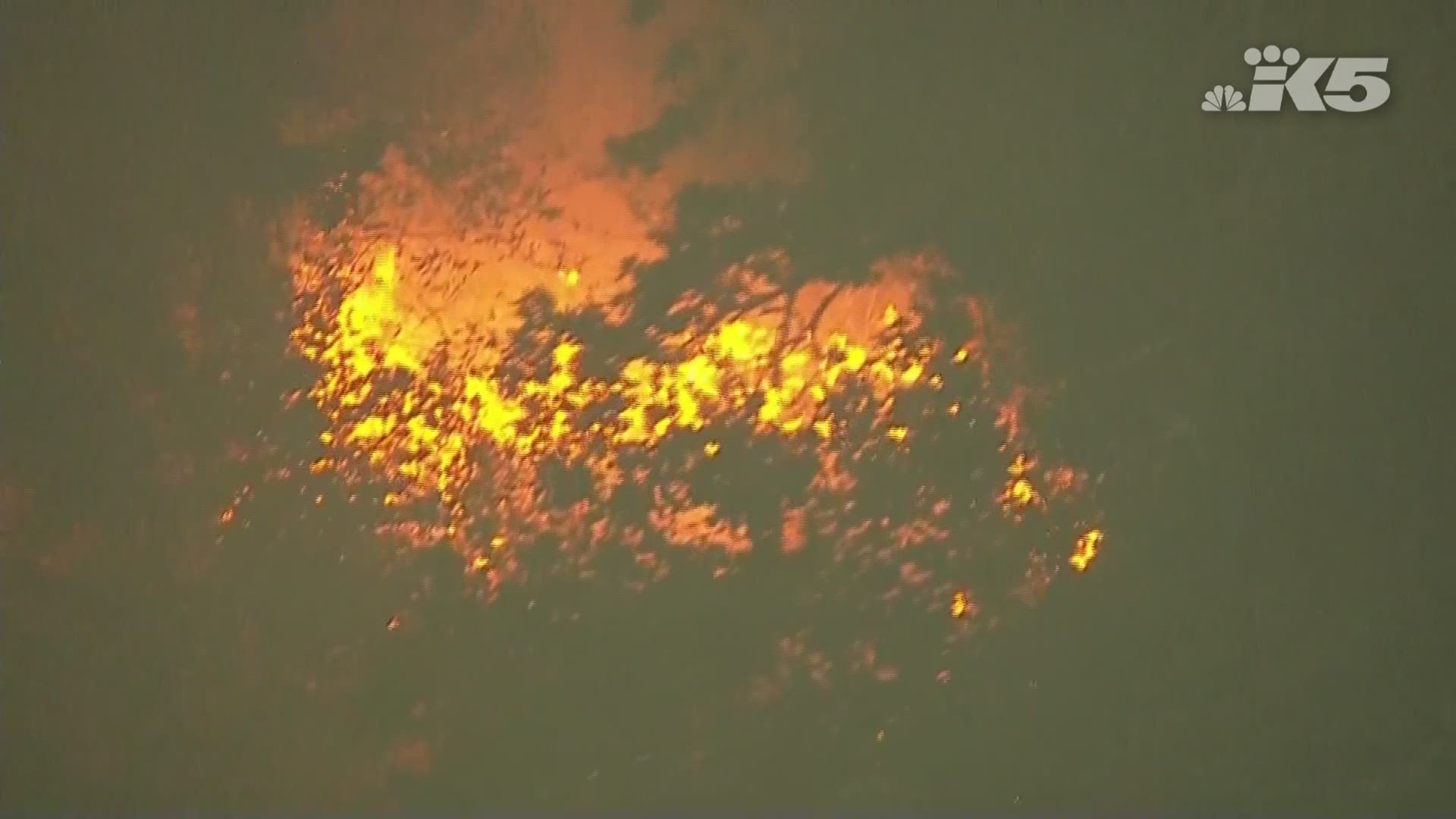 It appears the Eagle Creek wildfire that has forced hundreds of evacuations and closed miles of Interstate 84 east of Portland may be slowing down as winds pushing the fire west have weakened.

The Multnomah County Sheriff's Office on Tuesday night said fire officials "are indicating that the fire has slowed way down for now." The latest evacuation order was issued early Tuesday afternoon.

The fire, which started burning on Saturday, had doubled in size to 10,000 acres from Monday night into Tuesday morning. About 500 emergency personnel are fighting the blaze. No known residential structure losses have been reported. In addition to the evacuations in Multnomah County, Hood River County has closed all forestland for recreational use.

A 15-year-old Vancouver, Wash. boy is a suspect in the Eagle Creek fire, according to Oregon State Police.

Officials believe the teen and others may have been using fireworks that started the forest fire. Police made contact with the teen in the parking lot of the Eagle Creek Trailhead, and he is cooperating with police.

The fire jumped the Columbia River Gorge into Washington on Tuesday and is burning in the Archer Mountain area, according to Skamania County officials. Units from five fire departments are responding to the blaze.

Residences in the Smith-Cripe and Archer Mountain Road area are under a Level 3 evacuation, which means leave immediately.

The 1,600-acre growth of the fire on Monday led to the closure of I-84, the major east-west thoroughfare through the Columbia River Gorge, from Troutdale to Hood River. Trucks heading westbound are being detoured off the highway at The Dalles.

Oregon Department of Transportation spokesman Don Hamilton said the freeway is closed due to poor visibility from smoke and the fire getting closer to the road. He said they will work with law enforcement to determine when to reopen the road. Hamilton expects I-84 to be closed for most of Tuesday.

On the Washington side of the gorge, trucks are prohibited from driving eastbound from Washougal to Dallesport.

Winds pushed the fire west on Monday and smoke was blown over much of the gorge and Portland metro area. Residents as far west as Hillsboro reported ash falling. An air quality warning is in effect in the area until Tuesday night.

Level 3 evacuation orders, meaning residents should leave immediately, have been ordered for the following communities:

Level 2 evacuation orders, meaning residents should be ready to leave at a moment's notice, have been issued for the following communities:

Level 1 evacuation orders, meaning people should get ready for a potential evacuation, have been issued for:

Red Cross shelters are set up at Mount Hood Community College in Gresham and at the Skamania County Fairgrounds in Stevenson, Washington for evacuees.

Cause of fire identified

The investigation into the cause of the fire is being conducted by the Oregon State Police, U.S. Forest Service, Hood River Sheriff's Office, Hood River District Attorney's Office and fire personnel.

If anyone has information about the cause of the fire, including anyone who heard fireworks or explosions go off in the Eagle Creek Trail/Punchbowl Falls area, Oregon State Police urges them to come forward. They can contact police at (503) 375-3555.

All of the 153 hikers who were forced to spend the night in the mountains east of Portland made it down the trail to safety on Sunday.

Deputy Joel Ives said all of the hikers were accounted for. One hiker was taken out by ambulance for exhaustion and dehydration.

Many of the hikers had gone up the Eagle Creek Trail on Saturday to swim at the popular waterfalls and pools when the fire broke out below them at around 4:30 p.m.

The hikers found themselves trapped between the new Eagle Creek Fire and the older Indian Creek Fire, which had been burning to the south since July 4.

The only way to get the hikers out was through a longer, more difficult 14-mile route. With daylight fading on Saturday night, officials told them spend the night near Tunnel Falls. Mountain Wave Search & Rescue dropped supplies to the hikers.

Mountain Wave Search & Rescue president Russ Gubele said search and rescue teams headed up the second trail on Sunday morning and led the hikers out the 14 miles toward Wahtum Lake.

"It's horribly smoky," Gubele said. "Ash is coming down. It's like a Mount Saint Helens eruption all over again."

On Saturday, 14 hikers were brought out and returned to Eagle Creek and three hikers were rescued by National Guard helicopter.