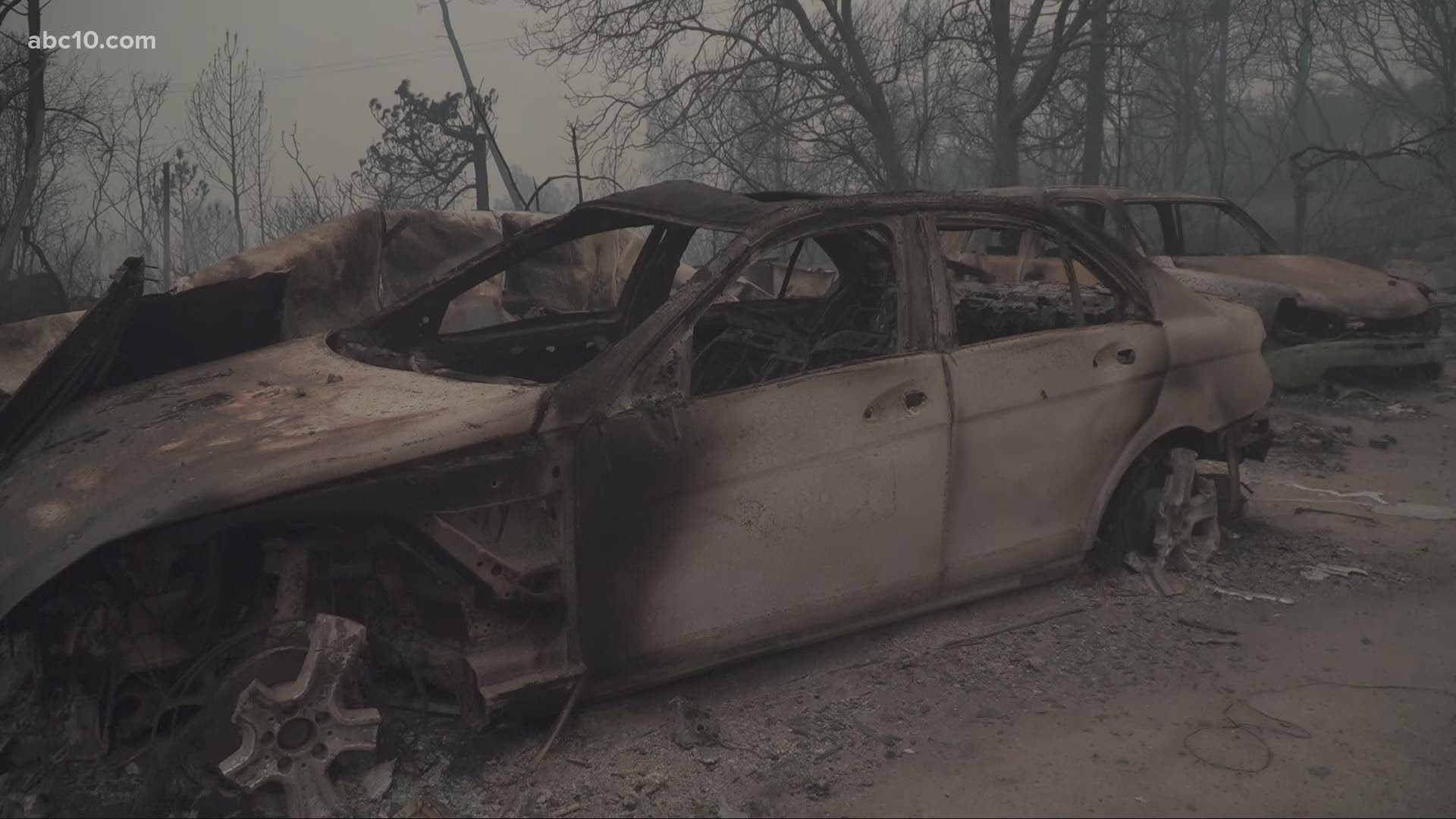 Click HERE to open the latest story on the Bear Fire.

Firefighters are focusing efforts at a point is east of Kelly Ridge in Butte County, where the Bear Fire continues to grow.

The fire has not crossed the drainage at this point, Cal Fire officials said in their Wednesday evening press conference. Firefighters are focusing on structural protection in Feather Falls, Big Bend, and the Berry Creek areas. 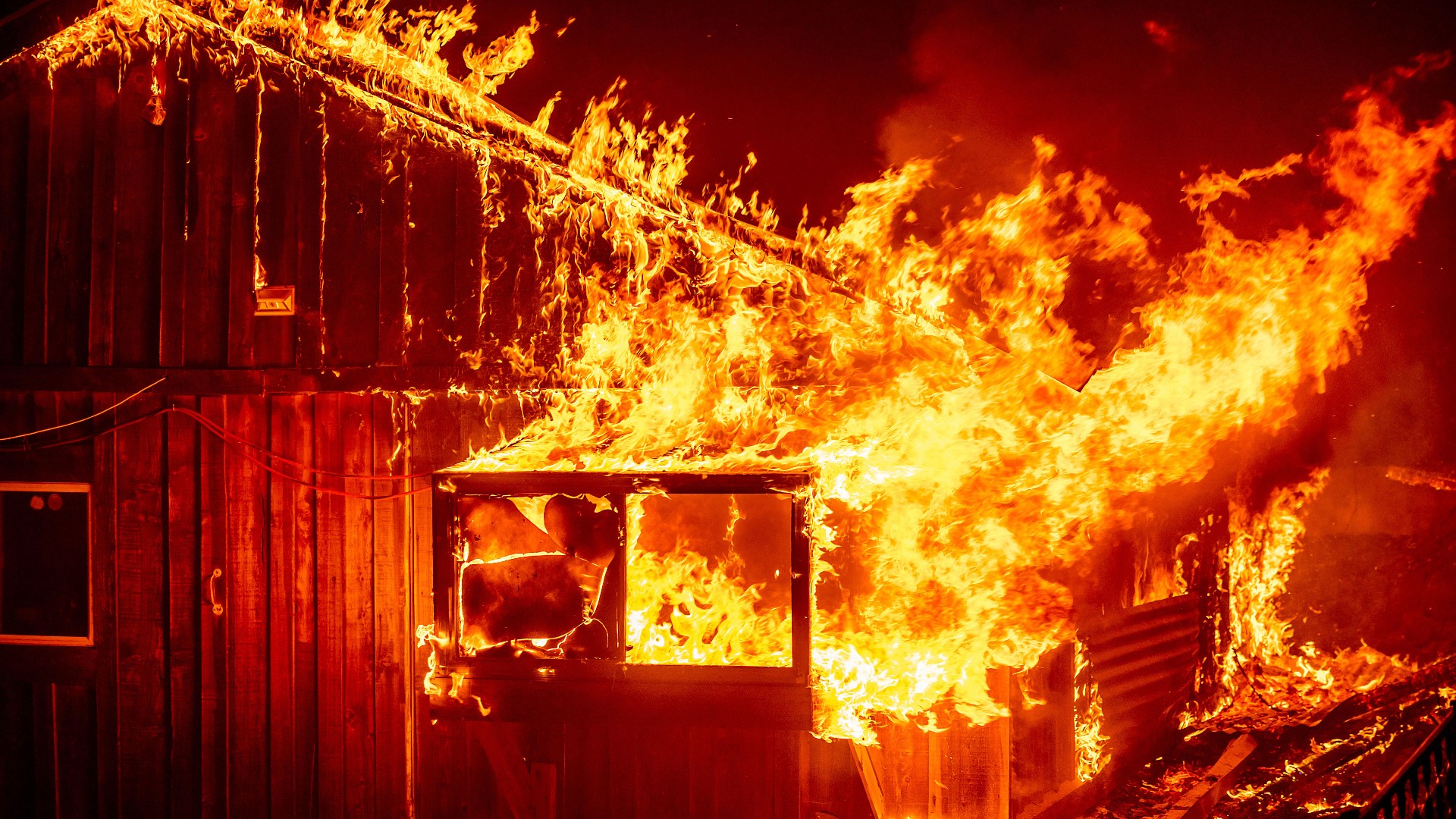 Of the three dead, Honea said two people were found in one location together while the third was found in a different location. No victims have been identified at this time.

High winds pushed the Bear Fire, part of the North Complex fires, into Butte County, tearing away the "toehold" that firefighters had managed to get with the North Complex Fire. Operation Sections Chief Jake Cagle said that a spot fire came across that was carried by high winds and drove the fire about 1,000 acres in 30 minutes.

Shane Lauderdale, an Operation Sections Chief with Cal Fire, said the fire is now east of Kelly Ridge, but it has not crossed the drainage. Crews are working on structural protection in Feather Falls, Big Bend, and Berrycreek areas.

Officials said 2,000 structures were damaged or destroyed in the fire perimeter of Butte County. They're still working to determine how many of each were damaged and destroyed.

In the southern half of the fire, 23,356 structures are threatened, and in the Quincy area, there's about 3,125 structures threatened. 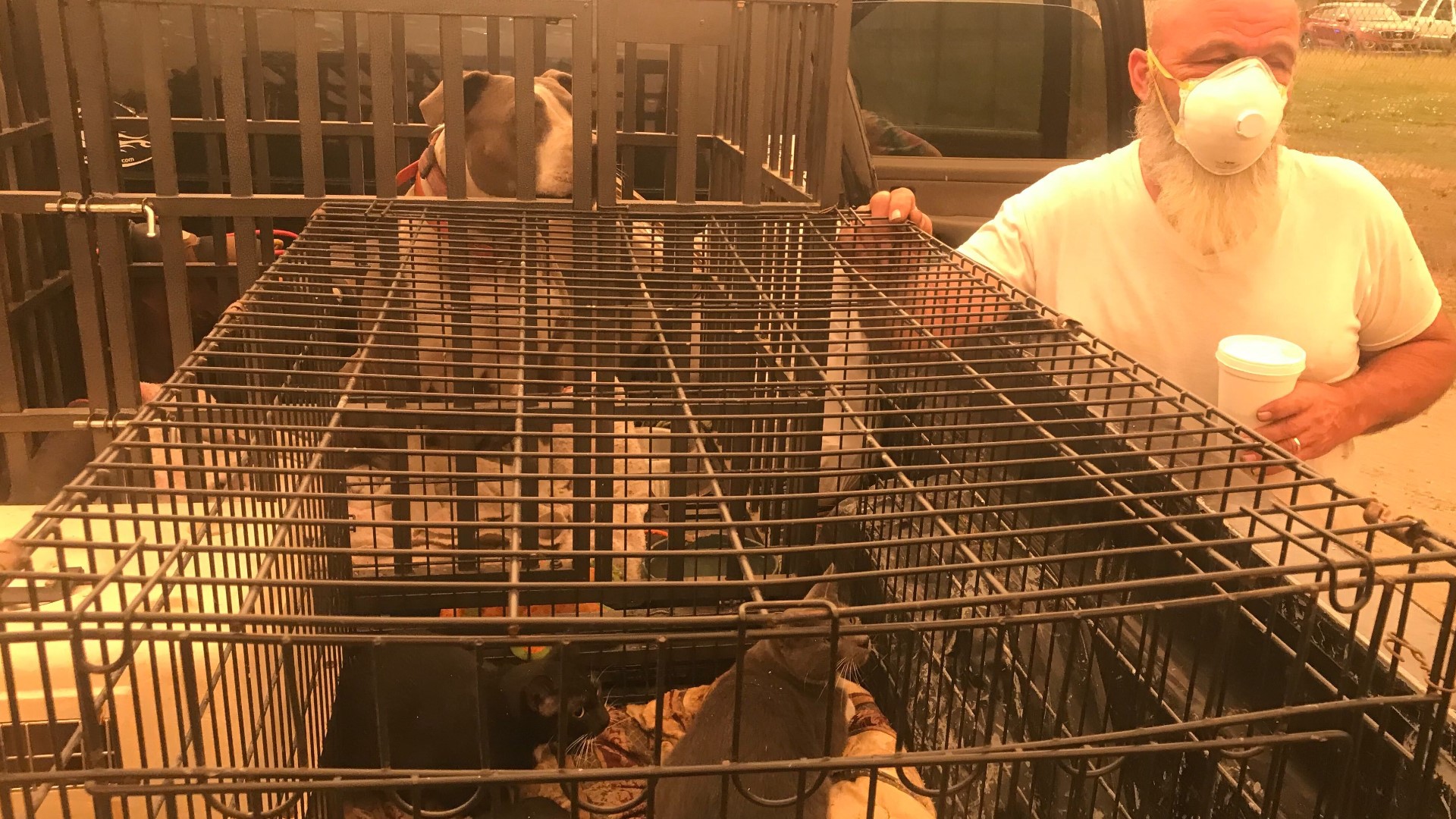 Evacuations warnings and orders have impacted about 20,000 Butte County residents.

Officials said 90 families are being sheltered in the county and surrounding counties, some as far as Sacramento. 40 families are still waiting for hotels.

Camelot will not be accepting animals between the hours of 8pm and 7:30am.

The shelter is currently at capacity and can't take additional animals at this time. The animal sheltering hotline is 530-895-0000.

More information on evacuations can be found HERE.

Three people are confirmed dead in the Bear Fire burning in Butte County, according to Butte County Sheriff Kory Honea.

Of the three dead, Honea said two people were found in one location together and the third was found in a different location. None of the victims have been identified and Honea said he did not want to give out any other information until family could be notified.

The North Complex Fire, of which the Bear Fire is a part, has ballooned to 254,000 acres with 38% containment, though the exact acreage of the Bear Fire itself is unknown at this time.

Berry Creek, which resides about 25 miles from Oroville, has been one of several areas largely destroyed due to the fires. Hulls of homes, structures, and vehicles are all that's left after the blaze raced through.

All that is left of someone’s home in Berry Creek. Residents have been told to evacuate the area. pic.twitter.com/TWdp1GzgnH

ABC10 is on the ground following the spread and survivors of the Bear Fire.

John Bartell drives through some of the devastation left behind in the wake of the blaze.

Watch as Mayde Gomez takes a look around the Butte County Fairgrounds, where an evacuation shelter has been set up due to the North Complex Fires, of which Bear Fire is one.

Survivors of the fire speak candidly about their experiences escaping the blaze.

Firefighters working to battle the Bear Fire describe a difficult situation as the fire is exploding in size. The North Complex, which the Bear Fire is part of, has now burned 150,140 acres and is 38% contained.

The U.S. Forest Service said it is dealing with "unprecedented fire behavior" as the fire is spreading at a rate of 1,000 acres every 30 minutes. The latest reports show an additional 80,000 acres of fire growth to the southwest area of the original footprint for the North Complex.

The U.S. Forest Service says there will likely be more evacuations throughout the day.

This morning the Butte County Sheriff's Office issued a new evacuation warning for the north side of Highway 70 in the area of Lower Concow.

The Butte County Sheriff’s Office is issuing an EVACUATION WARNING for the North side of Hwy 70 in the area of LOWER CONCOW. #ButteSheriff #BearFire #NorthComplexFire pic.twitter.com/oIMPo9KXnl

National Interagency Fire Center live map of the fire's location (it might take a few seconds for the fires to show up on the map):

More people are being warned to get ready to evacuate as the Bear Fire continues to grow in Butte County. The fire is part of the larger North Complex burning across three counties, Butte, Plumas and Lassen.

Early Wednesday morning, the Butte County Sheriff issued a new evacuation warning for areas of Oroville, Bangor and Palermo-Honcut. The warning includes the area of Highway 70 from Garden Drive south to Lower Honcut Road, Lower Honcut Road east to Bangor, and everything east to the current evacuation area.

Just after midnight, the Butte County Sheriff issued an immediate evacuation order for Cherokee Road at Highway 70, south to Thompson Flat Cemetery Road, and all areas east to Lake Oroville.

Click HERE for the latest information from the Plumas County Sheriff's Office.

Click here to see a map of the current evacuation area.

We have created a new map to show the evacuated areas. You can access the map by clicking on the link below. https://t.co/5jOvU4oBuh

9.9.20 2:12am: The Temporary Evacuation Point has been relocated to the Gridley Fairgrounds. #NorthComplexFire #BearFire pic.twitter.com/zsVJEJxWuf

The Bear Fire is part of the North Complex, which has grown to 58,404 acres since first sparking on August 17. Crews have the fire 37% contained, which is a drop in containment from yesterday.

Multiple roads in Oroville are closed due to the Bear Fire.

According to Cal Fire, in 2019, California wildfires burned just under 260,000 acres from 7,860 incidents. Over 700 structures were damaged or destroyed and three people were killed. This followed two years of some of the “deadliest and most destructive wildfires” in California history.

If you live in a wildfire-prone zone, Cal Fire suggests creating a defensible space around your home. A defensible space is an area around a building in which vegetation and other debris is completely cleared. At least 100 feet is recommended.

The Department of Homeland Security suggests assembling an emergency kit that has important documents, N95 respirator masks, supplies to grab with you if you’re forced to leave at a moment’s notice. The agency also suggests signing up for local warning system notifications and know your community’s evacuation plans to best prepare yourself and your family in cases of wildfires.

WATCH MORE: How to protect yourself from California wildfire smoke