Within the last few months, Carol has seen "significant progression in loss of language, withdrawal, loss of awareness, some physical changes." 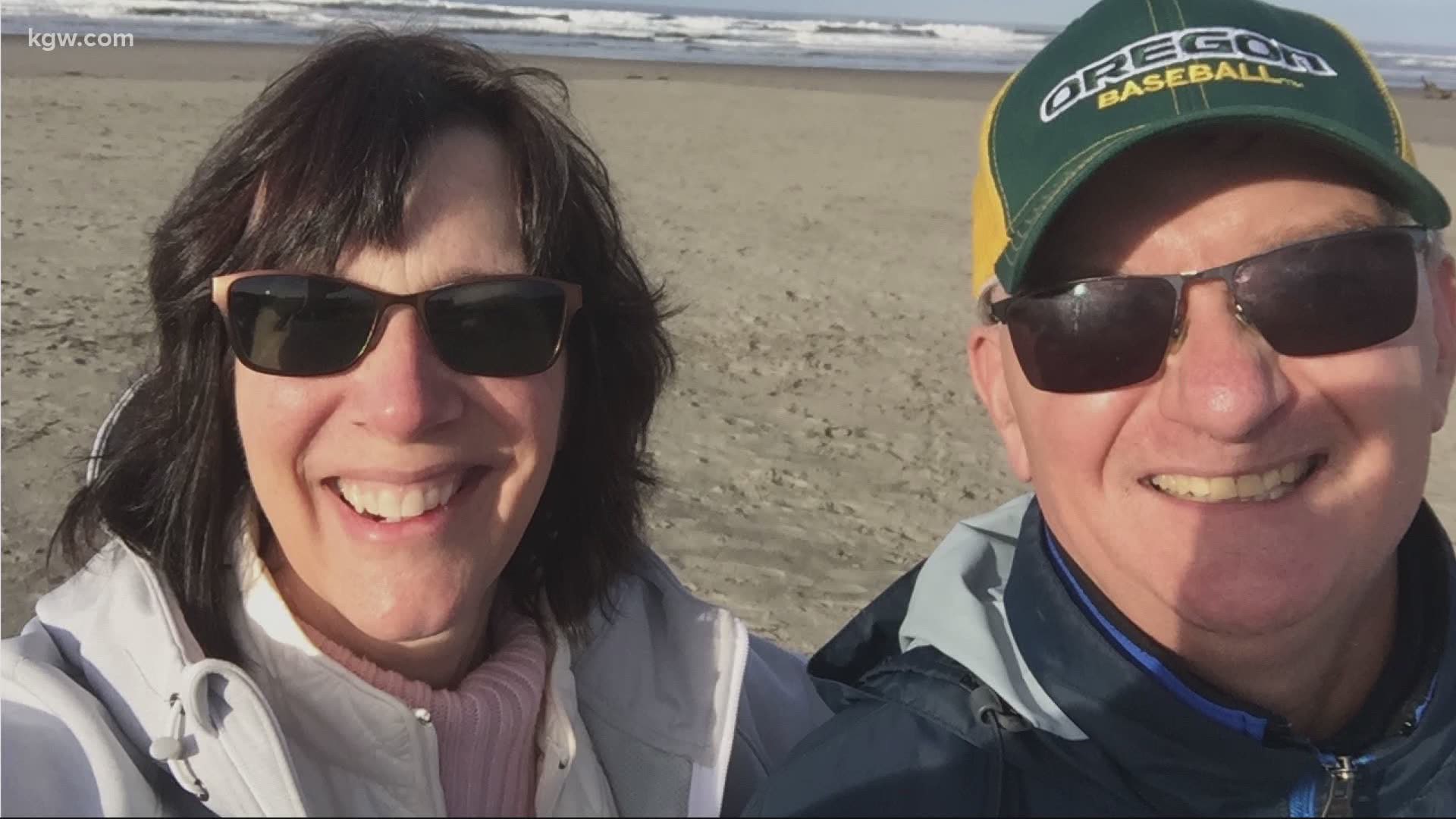 PORTLAND, Ore. — John and Carol Knight got married on July 13, 1985 and ever since have done everything together. They traveled the world, drove a Vanagon across the United States and visited their favorite places.

Carol says they've never really been kept apart. A few days here or a few days there. The couple enjoys walks together and visiting the beach. Together they've walked through the good and bad times.

In the summer of 2012 Carol said John started to notice changes, he was at a loss for words, saying his mind felt like it was in a fog.

RELATED: How to explain social distancing to those with Alzheimer's

"This is a man who has an MBA, worked 25 [years] in business, went back and got his teaching certificate. Just a very bright man, but just felt like he wasn't as sharp," Carol said.

The Knights tried to do what they could to slow the progression. The couple went through clinical trials at OHSU, listened to music, danced, went for walks.

Dementia was taking over John's brain.

In 2019, John was moved into a care facility, Carol was grief-stricken.

She sought the help of a counselor who told her to write in a journal. To write to the John before his diagnosis.

"So this is May 20, 2019, I started going to counseling in May and I said, Dearest John, I wanna share with you how sad I am that I don't get to sleep next to you," Carol said reading from her journal. "Of all the aspects that the disease has caused, that is the one that is the most difficult right now. I don't know how to get passed that. Lying down next to you every so often is special, but not sleeping in your arms is so hard. Carol."

Carol wrote to John multiple times and would always write herself back as if it was coming from John himself as a way to cope with the grief of not being able to be by her husband's side every minute of the day like they had for so many years.

RELATED: A Portland choir for those with Alzheimer's and dementia binds memories and harmony

March 13, 2020 was the last time Carol saw John without any restrictions.

"We had such a comfortable thing where I'd still come and sit and we'd watch TV on the computer together. It's like if we were just getting ready to have some daylight to walking in the garden. March 13 was the last day I entered."

Statewide, all care facilities and senior living homes were shut off from outside visitors.

"He's in a phase where sensory is so important and so that sense of touch, that sense of smell, that physical connection of being there, my voice is key to this phase."

Three months of isolation and Carol says she sees a decline in John's health.

"The isolation has robbed quite a bit. There has been a significant progression in loss of language, withdrawal, loss of awareness, some physical changes. He's fallen three times. They're worried that it's progressing where it's his body shutting down."

Carol visits John almost daily from either outside his room's window or looking at each other through a gate from a distance. Their time together usually lasts around 10 minutes for John gets up and starts to walk off, Carol wishes she could walk with him.

For Carol and John, being able to sit next to each other from 6 feet apart isn't the same as, "Being able to hold his hand and sit next to him and walk with my husband, that's what we do."

RELATED: Man battling Alzheimer's pairs with pianist to save a life's worth of original songs

WATCH: Oregon composer with Alzheimer's works with pianist to save original music