Whopping pay raises on deck for some ferry workers

The raises would cost the state an additional $1.2 million a year and would come at a time when the ferry system continues to face budget challenges and riders are being asked to pay more. 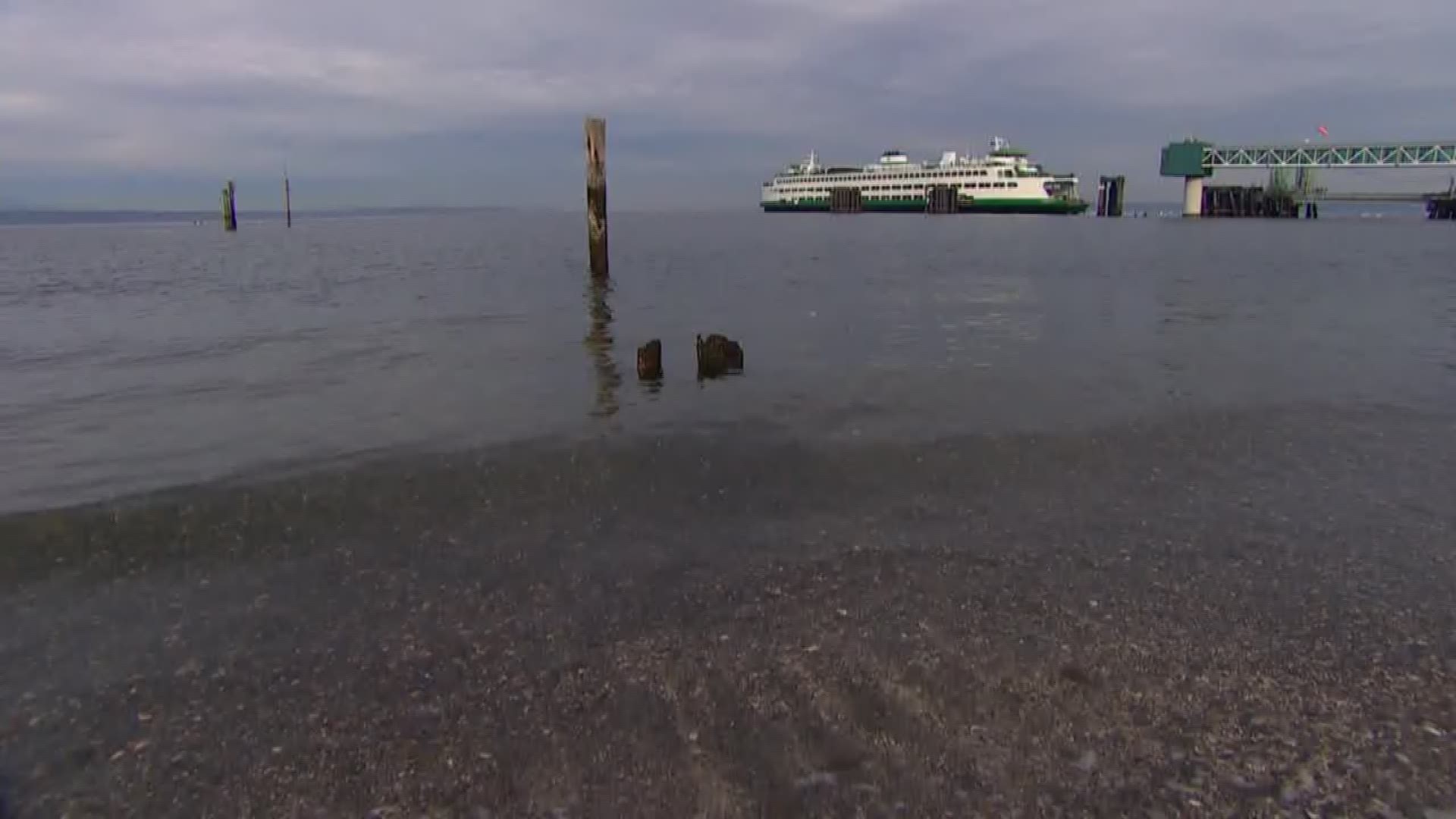 About 50 Washington State Ferries employees could get huge pay increases next year if the contract negotiated between ferry system managers and the workers' unions is approved.

The raises would cost the state an additional $1.2 million a year and would come at a time when the ferry system continues to face budget challenges, and riders are being asked to pay more.

Without prompting from the workers' unions, ferry system managers suggested a pay hike of 28 percent for the approximately 25 staff masters (also known as captains) working in the fleet. A 25 percent raise was proposed for the fleet's staff chief engineers -- the approximately 25 workers who oversee operations below deck.

The double-digit raises for the two groups still need to be approved by the legislature. In the meantime, most other ferry employees are set to receive pay increases of between 4 percent and 8 percent in the next biennium.

The system’s top executive, Assistant Secretary of Washington State Ferries Lynne Griffith, said the proposed boosts in pay are reasonable because the positions are critical for safe and efficient operations of the boats. She also said the current base pay isn’t competitive with private industry, and since many of these employees are approaching retirement age, higher pay is needed to attract people to replace them.

Griffith also justified the raises by noting that some other ferry workers with less responsibility earn higher base pay.

“So it’s an equity issue and a fairness issue, and it’s the right thing to do,” said Griffith, who came to State Ferries in 2014. “This is recommended by management and the reason it was, is because one, we have the best of the best. I want to keep them, and I want to be sure we’re attracting the best of the best in the future.”

A staff chief annual base wage is about $99,000. But with overtime, travel time and other perks, these workers routinely take home much more. In 2015 the average take home pay was approximately $150,000 per year. One of the top earners collected $171,000 in total compensation. Assuming this staff chief continues earning overtime and other added payments, the 25 percent raise would increase his total compensation to $214,000 - more than double his base wage.

The co-chair of the state’s Joint Transportation Commission was surprised to learn of the proposed raises.

“How do you justify this in a system that is hurting for money?” asked Sen. Curtis King, R-Yakima. “It’s a system that we’ve had to scrape and find money so that we can replace the boats, and we can keep this system alive. This doesn’t make any sense to me.”

The KING 5 Investigators found that the ferry system has changed compensation practices in the five years since reforms were put in place in response to KING 5's investigative series, Waste on the Water. That series, which aired in 2010 and 2011, revealed millions of tax dollars wasted for years by management providing extra pay to workers, much of which was not part of collective bargaining agreements.

For example, some relief (fill in) workers were able to double their salaries by choosing to work routes far from their home and getting paid travel time and mileage for the long commutes. The investigation also found employees getting paid thousands of dollars a year to drive to and from work for “special assignments” that, despite the short-term implied by their name, lasted for some workers as long as 10, 12 and 15 years.

Staff chief engineers, who run operations below deck, were found to be assigning themselves hundreds of hours of overtime and in some cases gaming the system to earn triple time.

Asked if it seemed reasonable, given the history, to reward staff chief engineers with a 25 percent pay raise, WSF's Griffith said they deserve “every penny that they get.”

“Have they had to correct their ways and are there better controls in place? Absolutely. And I’m not going to withhold from them or any other staff chief or staff master because of something that happened in the past that we have since remedied. It doesn’t seem fair,” said Griffith. “(The problems uncovered in) Waste on the Water (have) been corrected. The management team in place is due diligence. That can’t repeat. (The practices) can’t repeat. So move on.”

But KING 5 found the ferry system agreed to reverse the pay reforms made after Waste on the Water by adding different paths for compensation.

In 2011, WSF quit paying relief workers' travel time to drive to and from work. To make up for the lost travel money, they started to receive “assignment pay” instead. Assignment pay is an additional 20 percent pay bump for every day worked. This premium is paid to all relief workers, whether they drive five or 50 miles to work.

“The Washington State Ferry negotiating team felt we had a good opportunity after Waste on the Water to cut some costs and take care of the travel time abuses taking place,” said former WSF Operations Director Steve Rogers, who served on the collective bargaining team for 16 years.

The LRO negotiates master agreements on behalf of the governor with union-represented employees.

“The governor’s negotiators were willing to appease the unions without taking anything away from them and changing the perception at the same time. I told them the perception ruse wasn’t going to last long,” said Rogers.

A representative from Gov. Inslee’s office told KING they couldn’t address the allegations made by Rogers.

“We can’t speak to previous negotiations. Regardless of comments from former employees, the data demonstrates there is a market gap. There are 46 individuals in these classifications who are central to managing safety for all passengers and crew,” wrote Tara Lee, Deputy Communications Director, Office of Governor Jay Inslee.

The contract for years 2017 and 2018 includes assignment pay enhancements. Now the relief workers are scheduled to receive the premium pay meant to make up for lost travel compensation, even when they’re not driving anywhere. The 20 percent extra will be added to their checks when the employees are sick, on vacation or using comp time.

“That usurped everything we thought we may have gained. Now you’re getting an hour-and-half equivalent of travel time pay even if you’re sitting in Hawaii,” said Rogers.

WSF's Griffith said she didn’t know why the employees are set to receive the money meant to make up for travel time but that she would look into it. The perk is expected to cost State Ferries more than $400,000 per biennium.

Waste on the Water also prompted the legislature to reduce overtime pay rates from double time to time-and-a-half. The goal was to bring the compensation in line with other state employees. But in the years since that change was made, WSF agreed to “call back pay” -- when ferry workers are called in on a day off they receive time-and-a-half for all hours worked, plus an additional four hours of straight time pay. The addition essentially brings the overtime rate back to double time. (Employees working overtime hours on a regularly scheduled day do not receive the call back pay.)

“They took a temporary reduction over the years, but they gained back equal to or in some cases more than they had before," he said. “It’s ridiculous.”

Sponsor of the legislation that reduced overtime pay to time-and-a-half, Rep. Judy Clibborn, D-Mercer Island, wasn’t aware of the reorganized pay structure until contacted Monday by KING. She said she’s not disappointed in the change.

“If we were still seeing a system with missing runs and people gaming the system like you exposed in Waste on the Water then I would be upset. I’m not upset because we have a well-run, well-oiled ferry system,” said Clibborn, who is co-chair of the Joint Transportation Committee. “I’m feeling so good about the way the ferry system is being run today.”

Current management is new, and officials said they can’t speak to leadership’s motivation for adding the new forms of compensation in the years after 2011. But Griffith stands by the jumbo pay raises for some along with other add-ons agreed to by her staff in the most recent rounds at the bargaining table.

“These are highly skilled, technically sound individuals who are responsible for thousands of passengers safety every single trip,” said Griffith.

The legislature could ask for changes.

“As we go through the budget process (in the upcoming legislative session) we will start working on the transportation budget and we will see what the justification was (for the raises) and will decide whether or not we want to authorize it,” said Sen. King.

Washington State Ferries is the largest ferry system in the United States. Last year State Ferries had a ridership of nearly 24 million people.