One patient died and five others were infected by mold in Seattle Children's hospital operating rooms. 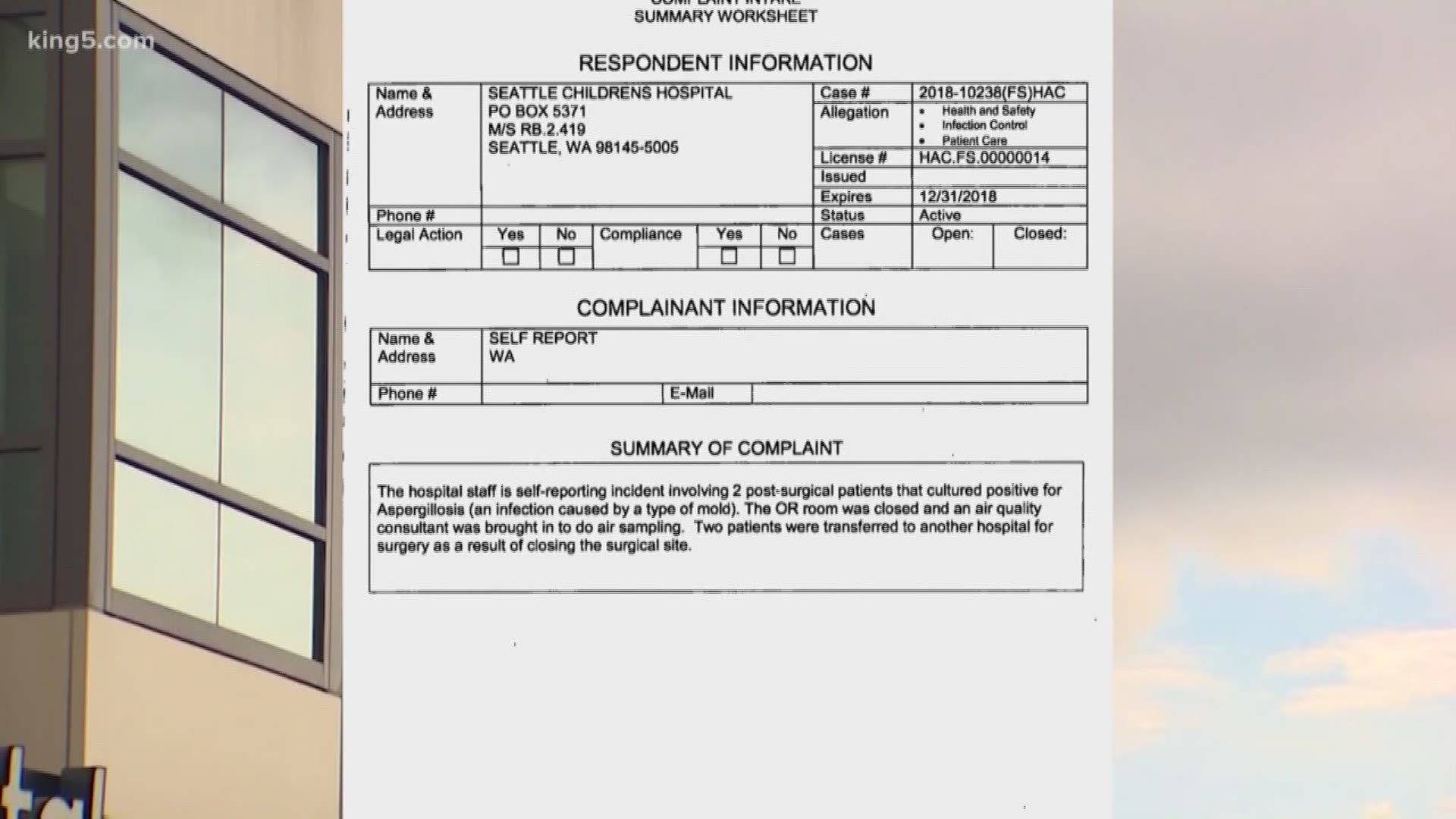 SEATTLE — A whistleblower who filed a complaint with the Washington State Department of Health in 2017 claimed Seattle Children’s hospital faced a mold problem before a patient died the following year.

The discovery of Aspergillus, a type of mold, discovered at Seattle Children's hospital led to operating rooms temporarily closed, surgeries postponed, and an investigation by the Washington State Department of Health.

In 2018, one patient died and two others developed an infection from Aspergillus. It was detected in operating rooms at Seattle Children's. In 2019, Aspergillus made three more patients sick. According to the hospital, the risk of developing an infection is very low. The patients who did were reportedly at high risk because of the types of procedures they had.

According to a complaint received by Department of Health on November 20, 2017 and obtained by KING 5 through a public records request, a whistleblower contacted DOH, saying they were a Seattle Children's employee who wanted to remain anonymous as they reported "an unsafe facility condition."

In an email, the whistleblower says a company was hired to fix leaks in the hospital's Forest building and claims there was a potential that mold was in the HVAC system.

DOH's Office of Investigations and Inspections found no deficiencies, saying staff did identify a water leak, but corrected it. The allegation that there was an ongoing issue with mold was not substantiated.

Operating rooms were closed and an air quality consultant was brought in to investigate. After a public health adviser conducted interviews and toured the facility, the conclusion on the complaint found no deficient practices and no violations.

On May 24, 2019, Seattle Children's announced it was temporarily closing its operating rooms.

On May 30, DOH conducted an on-site investigation, and based on that visit found the hospital's governing body failed to ensure that all patients had access to safe and appropriate care.

Seattle Children's received a list of deficiencies. The hospital responded with a plan of correction.

On July 2, Seattle Children's Chief Medical Officer Dr. Mark Del Beccaro said, "we will not reopen until we feel it is safe to do so."

Days later, the hospital's plan to reopen with new safeguards in place to protect patients, was approved.

In mid-July, experts from health departments and the Centers for Disease Control and Prevention toured the facility. According to Seattle Children's, the agencies' feedback was that the hospital has taken the appropriate actions to reduce the risk of future Aspergillus infections.

DOH will revisit the hospital within 45 days to ensure they have fully implemented their plan.

"Daily air tests have confirmed that our operating rooms are safe for patient care, and our surgery coordinators are working with families whose surgeries were postponed to reschedule their procedures. Given the large number of procedures that had to be postponed, it will take time to reschedule every procedure. We are deeply sorry for the impact the closure of our operating rooms has had on our patients and families, and we are grateful for their understanding as we resume operations."