Starting Oct. 2, people who have felony convictions on their criminal records will be able to apply for a license to grow, process, or sell marijuana. 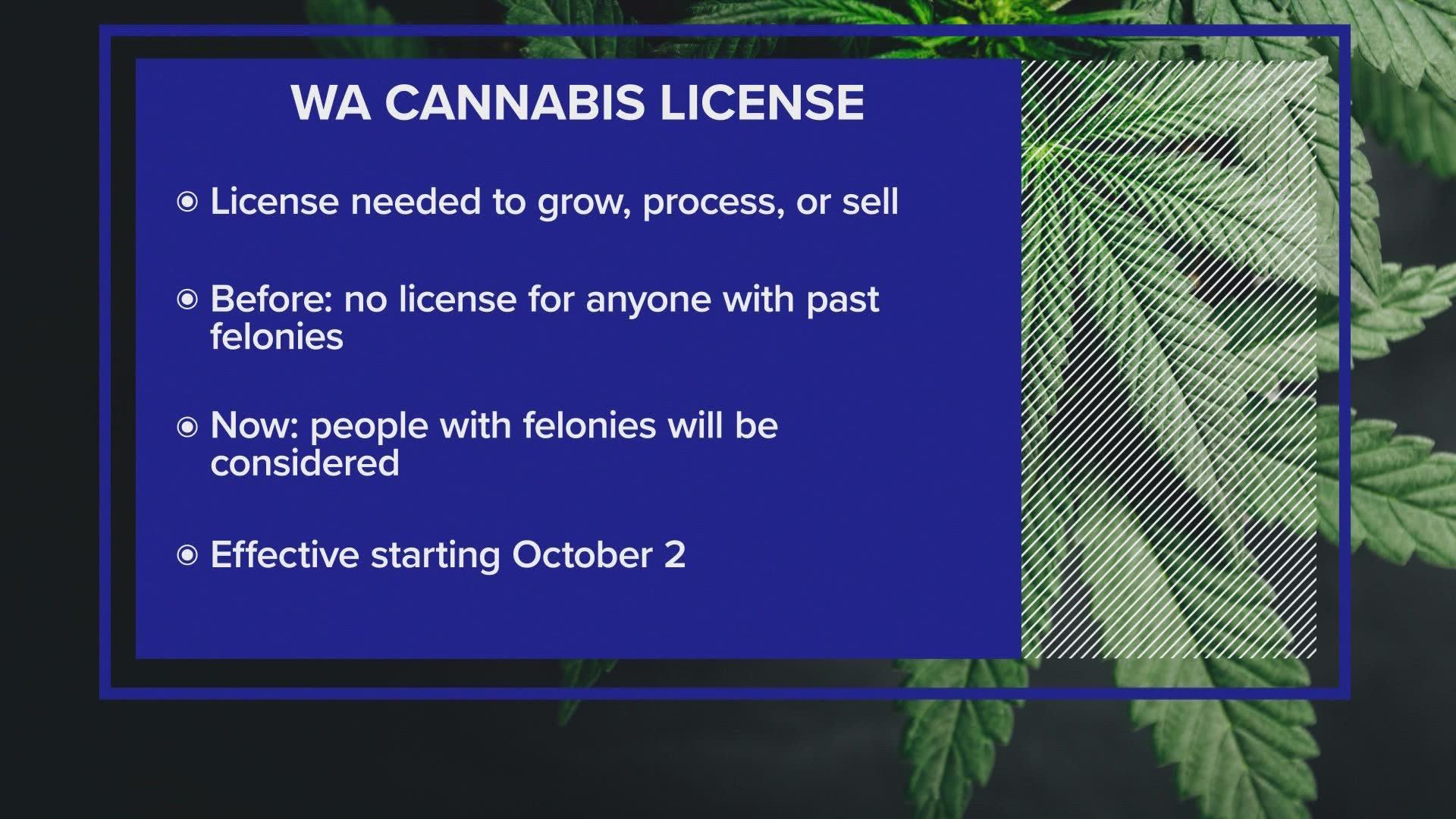 WASHINGTON — A new rule takes effect Saturday in Washington that removes more barriers for people with a criminal history to enter the legal marijuana industry.

Starting Oct. 2, people who have felony convictions on their criminal records will be able to apply for a license to grow, process, or sell marijuana. Up until now, a single felony prevented someone from being considered.

The Washington State Liquor and Cannabis Board will now review those applications and conduct a more in-depth review if a certain criteria is met.

For instance, a person who has a serious felony conviction within the past 10 years will still prompt an in-depth review of their application, but the board will consider things such as time since the conviction, or pending offenses; the nature and specific circumstances of the offense; relationship of the offense to the nature of the work performed; and if it's criminal, any relevant evidence of rehabilitation, among other criteria.

Less serious felonies will be treated differently by the board as well. If someone has one Class C felony conviction on their record, that will no longer be enough to deny someone's license application. In addition, if someone has less than three misdemeanors in the past three years, that won't be enough to trigger a review by the board.

More information about the rules is available here.

The rule change is all part of a greater push to remove barriers to enter the legal marijuana industry.

Earlier this year, Gov. Jay Inslee, D-Washington, signed House Bill 1443 which is aimed at helping minorities get into the state’s marijuana sales and manufacturing business.

According to data provided by the Washington State Liquor and Cannabis Board, when asked to identify themselves by race, 82% of the state’s licensed marijuana business owners identified themselves as non-minority.

The bill expanded the state’s Task Force on Social Equity in Cannabis, which called for some of the changes in the law.

License applicants who have prior convictions for marijuana-related crimes, or who live in areas defined as “disproportionately impacted,” now qualify for grant funding and expert advice to help them get started in the business.

“It’s a down payment on what the state of Washington owes its Black residents,” Paula Sardinas, co-chair of the task force, previously told KING 5. “We’re doing things to make those wrongs, right.”