The lawsuit aims to block the mandate from going into effect until the state and the union reach a bargaining agreement. 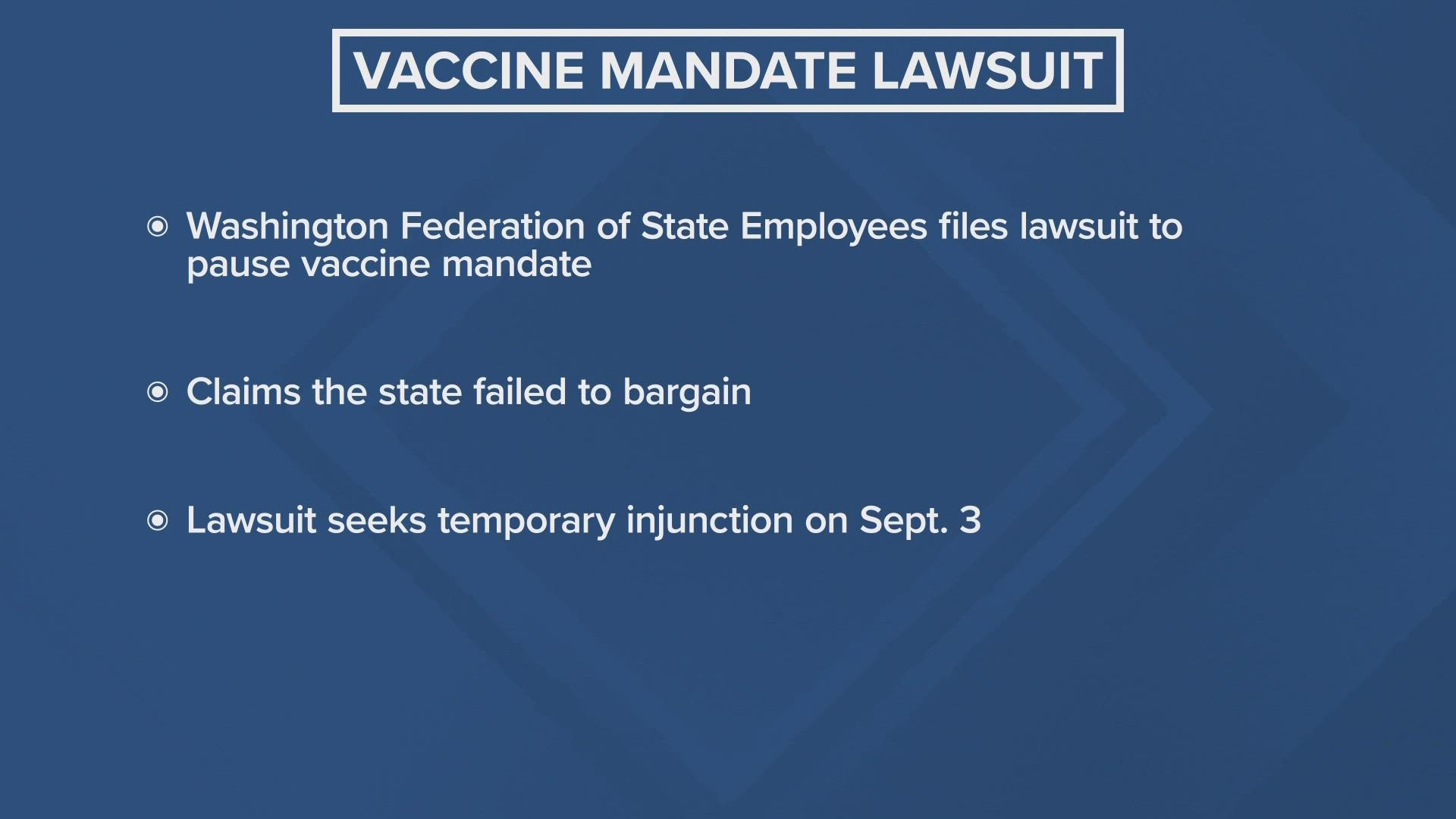 OLYMPIA, Wash — The Washington Federation of State Employees (WFSE) filed a lawsuit Thursday in an attempt to stop Gov. Jay Inslee's vaccine mandate from going into effect after the state and the union failed to reach a bargaining agreement.

The complaint filed in Thurston County Superior Court alleges the state "failed to bargain the effects of [the mandate] in good faith" with the union, according to a release from WFSE.

The vaccine mandate, passed down by Inslee in early August, requires most state employees, healthcare workers and K-12 employees to be fully vaccinated by Oct. 18 or face losing their jobs.

The lawsuit alleges during bargaining sessions with the state, representatives struck down all of the union's proposals to "modify or mitigate the impacts of the proclamation" and did not offer any counter-proposals in an attempt to reach an agreement.

The union also alleged the state's bargaining representatives lacked the authority to agree to WFSE's proposals or to make modifications to the Proclamation depending on the agreement.

In order to comply with the mandate, state employees would need to get their second COVID-19 vaccine on Oct. 4 in order to be considered fully vaccinated by Oct. 18. Depending on which vaccine employees get, some would need to start the vaccination process by Sept. 6 in order to make the Oct. 4 deadline.

Employees seeking a religious or medical exemption would need to seek out the necessary documents in time to begin the vaccination process on Sept. 6, should they not qualify.

The union says it would need to complete bargaining with the state before that deadline in order to inform employees of any changes and allow them to make a decision on whether to get vaccinated.

The lawsuit alleges if the vaccine mandate is allowed to move forward without a court ordering the state to reach an agreement with the union, "the legal rights of employees represented by the WFSE will be irreparably harmed and impaired, and they will be denied any meaningful and effective remedy."

In response, Inslee's office said "We respectfully disagree with WFSE's allegations. We’ll be filing a response to the complaint."

Inslee’s mandate, which includes health care workers, school employees and child care workers, is among the strictest in the country. Washington's vaccine mandate does not include an option for employees to periodically get tested for COVID-19, unlike similar mandates in other states.

The state believes the mandates will force more people who have neglected getting the COVID-19 vaccine to do so and raise the population’s immunity to the virus that has plagued the country and world for more than a year and a half.

Yet, many employers have voiced concerns that the mandate could force employees to quit industries that are already struggling to find workers.

Vaccination rates across the state have risen since the mandates were announced, which also came amid a steep rise in cases and hospitalizations caused by the highly infectious delta variant.

“Our state’s front-line heroes understand the importance of getting vaccinated,” WFSE President Mike Yestramski said. “Turning your back on the public workers who have risked their own health to beat this pandemic is no way to bargain.”

The mandate has driven some workers to demonstrate in opposition.

One rally, scheduled to take place Saturday in Olympia, is being organized by "Liberty, At All Hazards." The group says if Inslee does not rescind his mandate, "multiple areas of the state will be severely reduced or shut down completely."