Mayor Jenny Durkan said Wednesday evening she was ending the curfew, which had been scheduled to last until Saturday, after she met with community members. 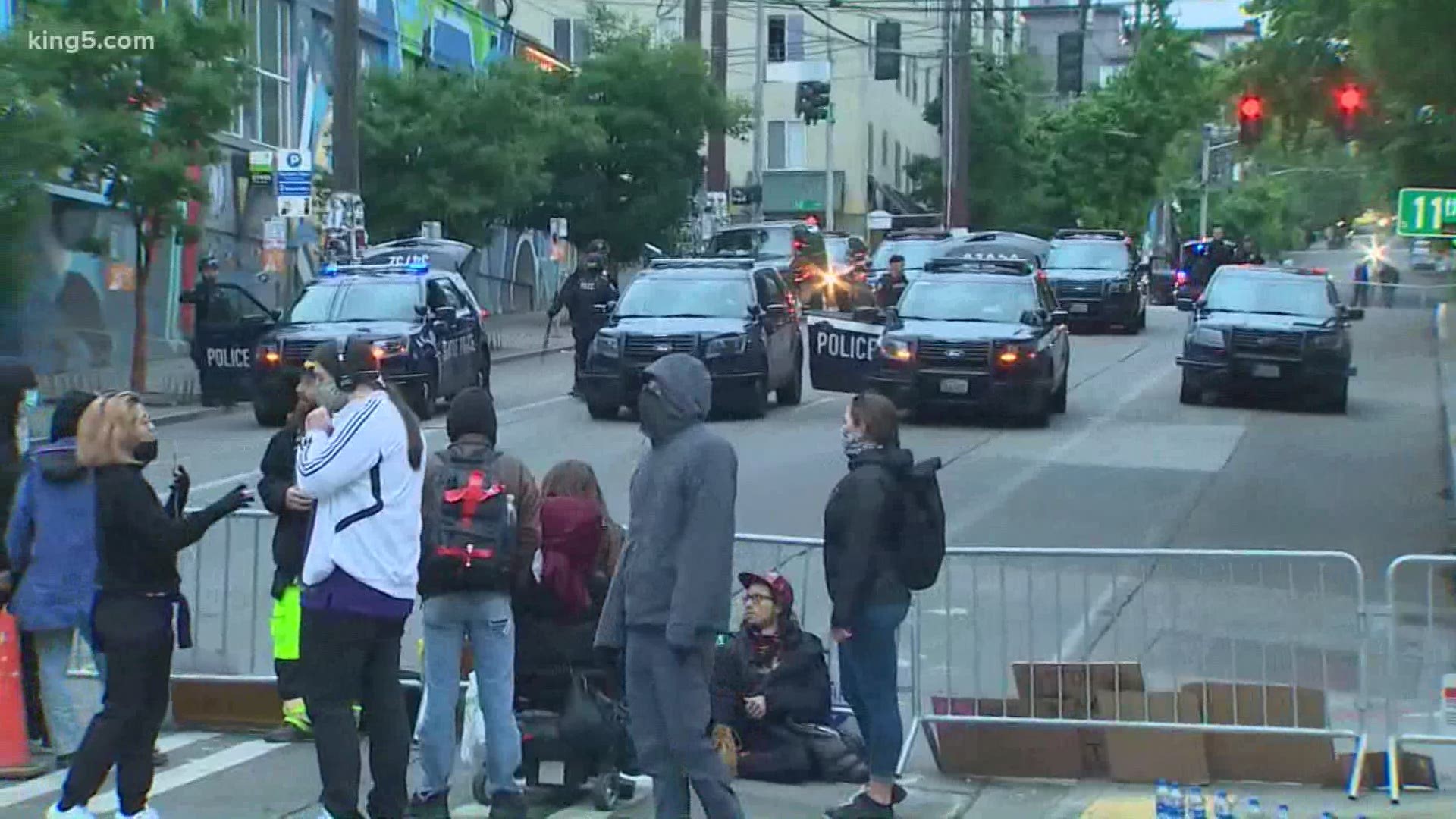 SEATTLE — A large crowd gathered in Seattle's Capitol Hill neighborhood Wednesday for the sixth night of protests over the death of George Floyd in Minneapolis police custody.

The office of Seattle Mayor Jenny Durkan confirmed the citywide curfew was over as of Wednesday evening. It was originally planned from 9 p.m. to 5 a.m. through Saturday, but city leaders reconsidered the orders amid requests from community activists.

Large groups of protesters remained in the city’s Capitol Hill neighborhood well after the abolished 9 p.m. curfew Wednesday. A smaller group of demonstrators remained into the early morning hours.

The curfews in Seattle and other Washington cities had been sharply criticized by some local elected officials, including U.S. Rep. Pramila Jayapal, whose district includes Seattle. 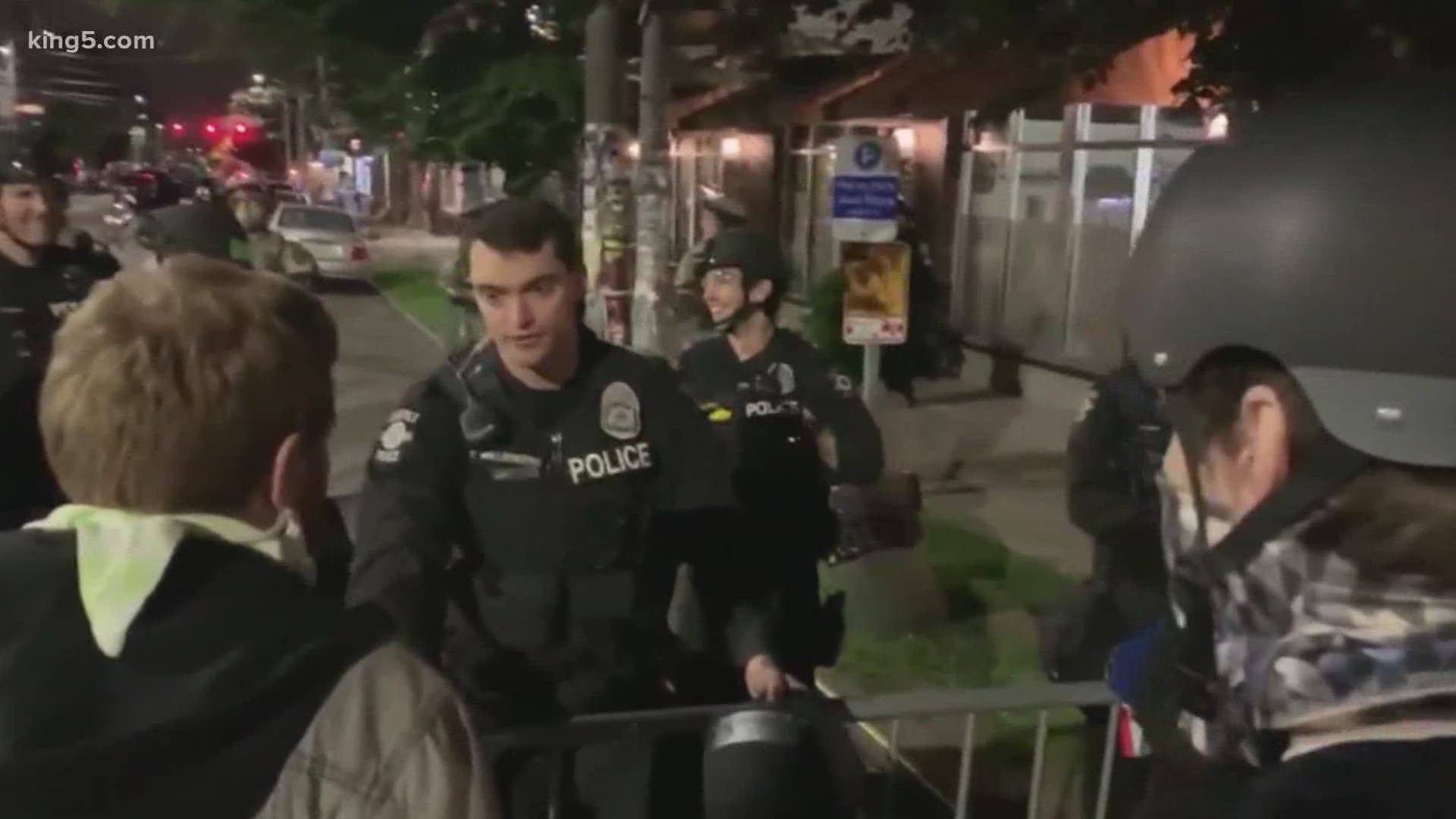 Protesters were still gathered at 11th and East Pine in Seattle’s Capitol Hill neighborhood early Thursday morning. At one point overnight the National Guard was at the intersection with police officers.

Protesters were seen cleaning the area around 5:40 a.m.

Seattle Police Chief Carmen Best tweeted overnight saying, "I hear you. I'm here to support my officers and the community... there is a peaceful way to do both. We're in this together, Seattle."

The mayor's office issued the following statement regarding curfews on Wednesday:

After meeting with community leaders today, Mayor Jenny A. Durkan and Chief Carmen Best announced that the citywide curfew will end effective immediately. The curfew was originally recommended by the Seattle Police Department as a way to aid in crowd control and preserve public safety after violence on Saturday. However, the Mayor and Chief chose to rescind the curfew following feedback from community leaders and protestors who wanted to ensure no peaceful individuals who were demonstrating were arrested. The Seattle Police Department did not make a single arrest for violation of the curfew.

“These last few days have been deeply trying, and have caused a level of sadness, anger, and frustration from the community that makes crystal clear: At the City, we can work together to make changes,” said Mayor Durkan. “On Saturday, we first implemented the curfew as a tool to help the Seattle Police Department disperse peaceful crowds, keep vulnerable people in their homes, and preserve public health and safety. However, community leaders made it clear that wanted to ensure peaceful demonstrations could still occur and ensure there was no disruption for our workers, and small business owners. Throughout the day, we have seen peaceful demonstrations, and Chief Best believes we can balance public safety and ensure peaceful protests can continue without a curfew. Effective immediately, the curfew is no longer in effect in the City of Seattle. For those who are demonstrating, please keep making your voices heard peacefully.”

Several other cities remain under curfew orders, so check with your local jurisdiction for details.

"Earlier today, (Seattle Police Chief) Carmen Best and I met with community leaders who asked us to end the curfew. Chief Best believes we can balance public safety and ensure peaceful protests can continue without a curfew."

It's unclear if or when Seattle's official curfew order has been lifted.

A full autopsy of George Floyd, the handcuffed black man who died after being restrained by Minneapolis police, has been released and provides several clinical details, including that Floyd had previously tested positive for COVID-19.

The 20-page report released by the Hennepin County Medical Examiner’s Office came after the coroner’s office released summary findings Monday that Floyd had a heart attack while being restrained by officers, and classified his May 25 death as a homicide.

A sea of protesters packed streets in Seattle on Wednesday in a sixth straight day of demonstrations over the killing of George Floyd, amid increasing criticism of the police department’s repeated use of tear gas and flash-bangs to disperse mostly peaceful crowds.

The demonstrators carried “Black Lives Matter” signs, called for cutting the department’s budget and shifting the money to social programs, chanted for officers to remove their riot gear, and knelt or sat together as they surrounded the building.

Seahawks quarterback Russell Wilson wasn't interested in talking about football during his first session with the media since the end of last season. Wilson said change is necessary following the death of George Floyd in Minneapolis and the nationwide protests that have followed.

Wilson’s 35-minute session was as emotional as he’s been in any formal media setting during his time in Seattle. He relayed stories from his youth in Richmond, Virginia, and about raising two kids now with a third on the way.

Tacoma Mayor Victoria Woodards will hold a press conference following up on a statement regarding the death of Manuel Ellis.

Ellis died in March while in police custody.

Although Ellis had drugs in his system when he died, the Pierce County Medical Examiner’s Office has determined Ellis died of respiratory arrest due to hypoxia due to physical restraint, according to the Tacoma News Tribune.

His death has sparked renewed outcry following the death of another Black man, George Floyd, who died in Minneapolis police custody.

“The only thing I know about the incident right now is that an individual died while in restraint of the Tacoma Police Department and that in itself demands a complete investigation." Gov. Jay Inslee said during a coronavirus press conference.

"As we wait to learn more about Manuel Ellis’ death, I want to continue the dialogues that we have started here in Tacoma on what we must change going forward to prevent further loss of life.

I say this about the city that I love and have the honor and privilege to serve as Mayor – We will not sit back and allow national tensions to bleed into the progress we are striving to achieve.

Together, we will serve as an example that we can move forward as a community if we are united in purpose and love.

As I have said previously, we are at an important juncture. On the razor’s edge of a critical tipping point in history, what we do in the here and now is up to us."

Both directions of I-5 are closed between SR 520 and I-90 in Seattle. There is no estimated time for reopening.

A group is planning to rally at Seattle's Cal Anderson Park Wednesday afternoon to protest the death of George Floyd and to call for defunding the Seattle Police Department.

The rally's agenda includes speakers and then a march to the Seattle Police Department, where the group plans to deliver a petition to defund the police department, which has reached at least 17,000 signatures.

Seattle Mayor Jenny Durkan promised to meet with leaders of the George Floyd protests Wednesday afternoon to begin working on a plan for police reform.

The meeting will come after five straight nights of demonstrations in Seattle over the death of Floyd, a black man who died after a white Minneapolis police officer pressed his knee to Floyd’s neck until he stopped breathing.

Durkan and Seattle Police Chief Carmen Best addressed hundreds of demonstrators Tuesday evening and urged them to continue pushing for their demands.

Durkan said she would work on a plan with Best and the Community Police Commission but stressed she wanted input from the protesters themselves. The mayor agreed to sit with leaders of the protests Wednesday at 3 p.m. to discuss what a plan would look like moving forward.

“We won’t get it perfect every time, but we will keep trying,” Durkan said.

Organizers invited protesters to share their questions for Durkan by email and said they would brief demonstrators on progress after the meeting.

RELATED: What we're learning about who was arrested in Seattle this weekend