Biologists and zoo caretakers prepared the latest group of endangered hatchling turtles for release into the wild. 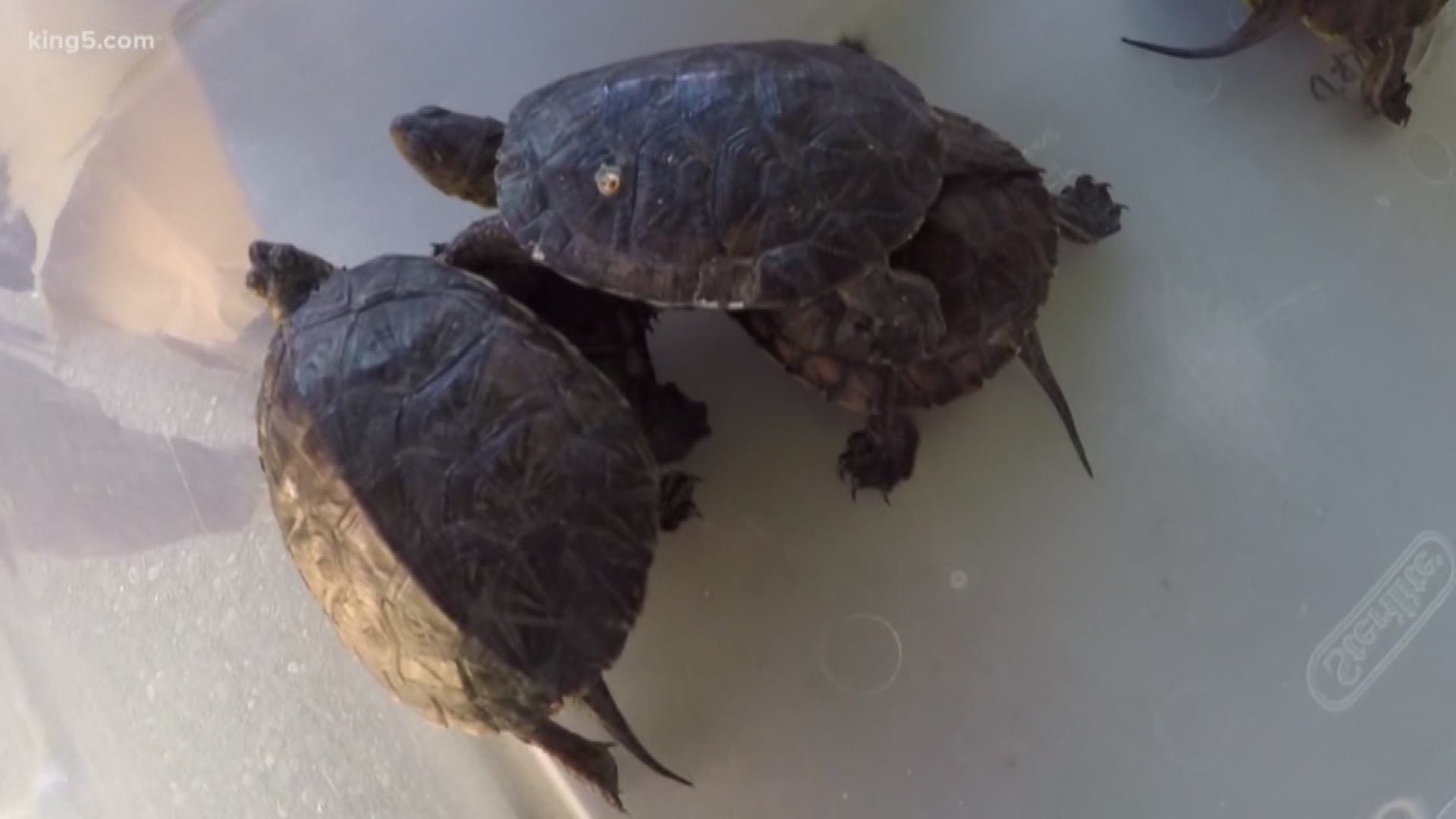 For 28 years, the Woodland Park Zoo has been leading the fight for the survival of the western pond turtle. Thursday morning, biologists and zoo caretakers prepared the latest group of hatchlings for release into the wild.

Western Washington's only native freshwater turtle species is endangered in the state. Conservation efforts have helped—but there's still a long way to go.

By the early 1990s, only two wild populations of the western pond turtle remained in Washington state—about 150 turtles in all. Decades of commercial exploitation, habitat loss, and predation by invasive bullfrogs and bass had decimated the native turtles.

"We decided to do something drastic," said Jennifer Pramuk, an animal curator with the zoo.

They captured mature turtles and brought them into the zoo to breed, where their nests were kept safe from predators. This program evolved into the current conservation effort, a program the zoo calls "headstarting." The Oregon Zoo has also run a headstarting program since 1998.

Under the headstarting program, staff from the zoo and the Washington Department of Fish and Wildlife (WDFW) track nesting mothers and collect their eggs, which are then incubated at the zoo. Once born, hatchlings are kept until about they are about ten months old. Under the watchful eye of caretakers at the zoo, the baby turtles will grow to roughly three times bigger than they would in nature. This gives the hatchlings a better chance for survival out in the wild. Each turtle is weighed, microchipped, and given a unique identifier number before being released.

Today, more than 1,200 turtles live in six populations across western Washington. A 2013 study by the zoo and the International Union for Conservation of Nature examined the ability of the turtle population to sustain itself.

"The headstarting we do now is still necessary to keep the population viable," said Pramuk.

Pramuk hopes the population can recover to a self-sustaining level in the future.

One threat that conservationists are still grappling with: shell disease. This mysterious ailment causes lesions in turtles' shells. These lesions can even penetrate the cavity housing the turtle's internal organs. Scientists aren't sure how the disease affects the turtles' lifespan or their ability to reproduce.

So far, researchers have identified a fungus associated with the ailment, but it is unclear whether the fungus causes or follows shell disease.

"Everything with turtles happens slowly, including the disease progression," said Emily Butler, the assistant district wildlife biologist with WDFW.

The speed makes it difficult to combat.

Now, Woodland Park and Oregon Zoos and WDFW are teaming up with Chicago's Shedd Aquarium and the University of Illinois to find factors that leave the hatchlings vulnerable. Scientists with the aquarium will analyze samples from both the natural and captive turtle habitats.

Wild turtles have been more resistant to shell disease than turtles that have spent time in zoos. By looking at differences between the microorganisms that live in the wild and those in the zoo, the aquarium scientists hope to figure out what gives wild turtles their advantage. If these conditions can be replicated in the zoo, captive hatchlings may be able to better fight the disease.

Why go through all this for such a small turtle?

"It's important to keep our native species," said Butler. "It's part of who we are."