Though Washington allows voting by mail, many rushed to dropboxes this weekend to cast their votes as soon as possible. 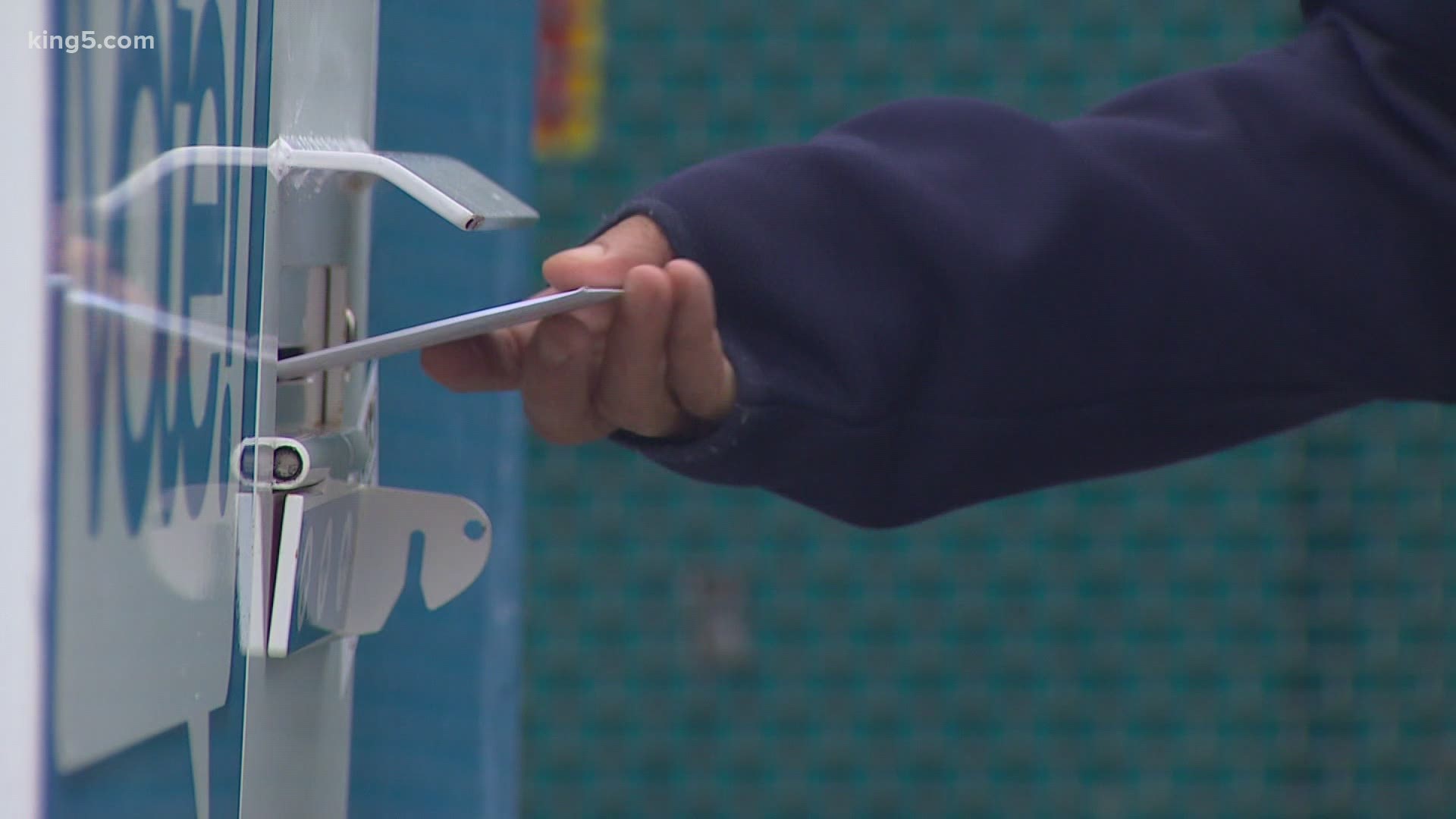 SEATTLE — Enthusiasm was high among voters casting their ballots across King County this weekend. Many felt it was important to turn them around quickly, as election day draws closer. Voting in Washington opened Friday, Oct. 16, and continues through the deadline on Election Day on Tuesday, Nov. 3.

King County Elections expects record turnout in this election – 90%, and tweeted it had received reports of some dropboxes already filling up Saturday. The office also said that teams were working to make sure boxes were emptied out and usable for voters, and will monitor capacity throughout the collection period.

Boxes would be emptied at least one a day, with some in high traffic areas being emptied multiple times per day, the Elections department said.

Rose Lauzon stopped by the dropbox in West Seattle’s Alaska Junction, eager to vote as soon as possible.

“This is the most important mail of my whole life,” she said, dropping her ballot in the box.

“I’ve been waiting for this ballot to come in for days now, and I got it last night, so now it’s there,” she said.

You can find your ballot dropbox here in King, Snohomish and Pierce counties. The Secretary of State's office has statewide voting information available here. 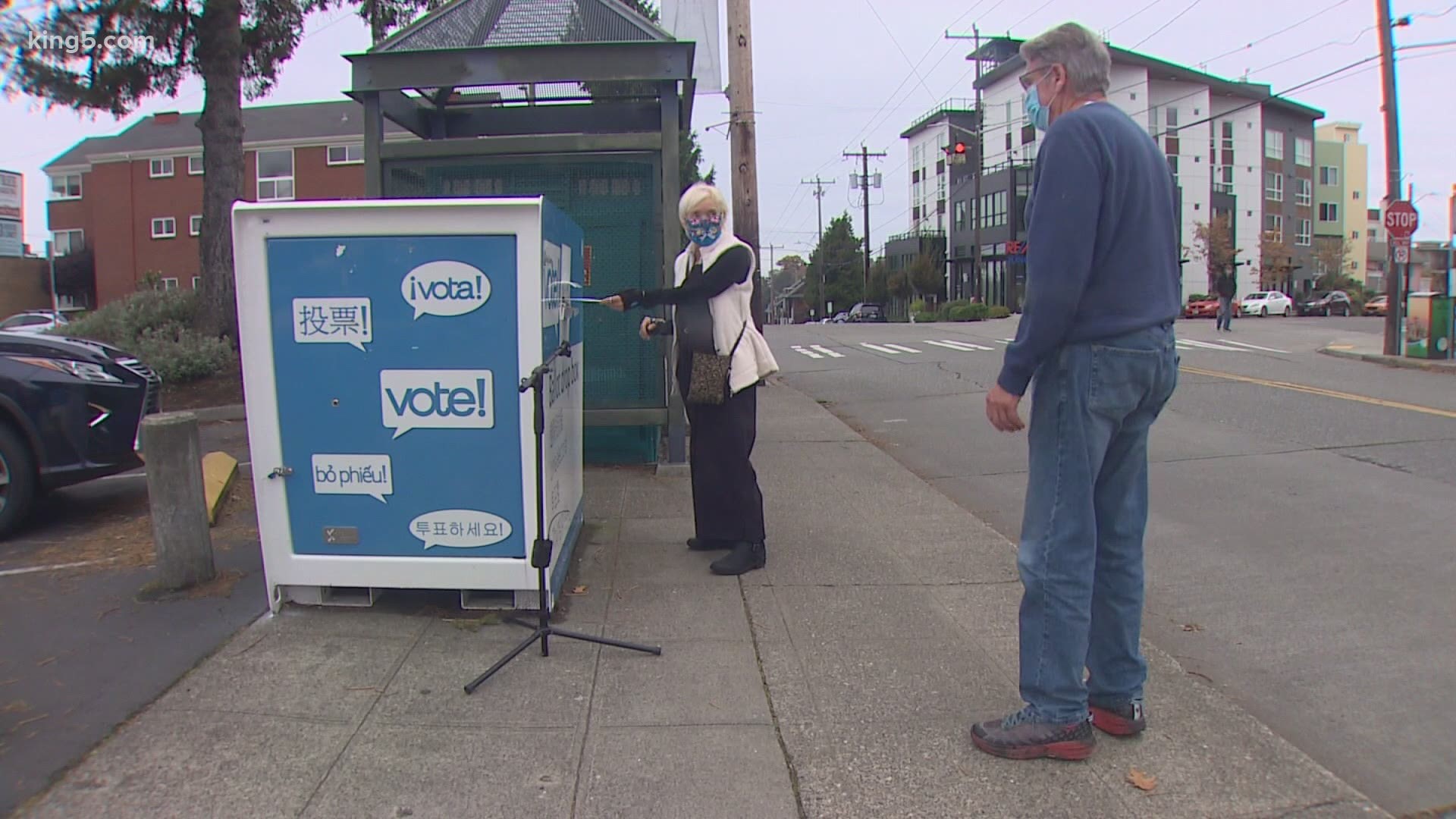 If you're already registered to vote in Washington, you don't need to request your ballot. Voters may return their ballot by mail, though some prefer to make an event of it by taking it to a dropbox in person.

This casts a striking difference from other states, where some voters across the U.S. waited hours in line to cast early ballots this week.

“Our running group, a bunch of us are doing a ballot box run where we run to vote,” said Jack Rosenfeld of West Seattle.

Kara Clark ran with him to vote, wearing a face covering with a “Womxn run the vote” pattern.

“For me, there are so many issues that are at stake,” she said. “A lot of women’s rights are at stake. I’m passionate for the LGBT community, people of color.”

The Alaska Junction dropbox did have a reported hiccup Saturday, in an incident involving some sort of feces - though King County Elections said in a "Poo update," that the ballots are fine, and box was restored to service by the evening.

"Still watch your step as the team didn’t have materials with them to clean up the sidewalk - also, it’s a good night to thank an election worker!" the elections office continued.

Some expressed a desire to get their ballot in early, to leave time to resolve any issues before the deadline.

Others, like Carl Mitchell, had been waiting for this day.

“Oh, I’ve been ready for four years,” he said. "It’s been a rough couple years for voting in particular. And there’s a lot of people trying to prevent people from voting this year, and I just felt like getting it in early was important.”

Claire Sumadiwirya echoed the concern for voting early, to absolutely ensure her vote counts. She brought her daughter along to drop the ballot in the box.

“I think this year is kind of a crazy year,” she said. “As a mom and a small business owner – I have restaurant. So it’s a hard year for everybody, right. So I think my kids, and our kids, everybody who was born outside the U.S., or inside the U.S., has to realize the significance, that their voice really matters.”

"I think it's important if you feel passionate for a variety of communities, you get out and make sure your voice is heard,” Clark said.

You can find information about voting and registering to vote here.