Volunteers frustrated, determined to get 9/11 memorial in Milton 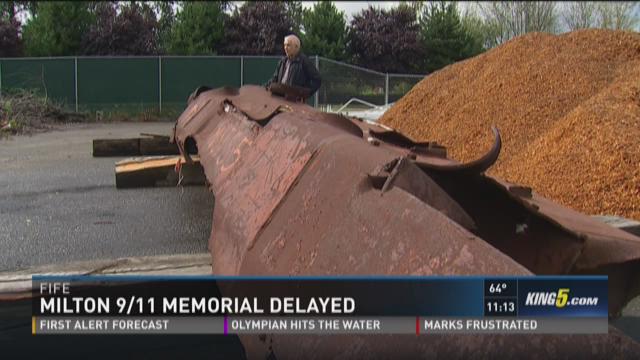 MILTON, Wash. -- Jack Chandler is frustrated, but he’s not giving up.

“I’m almost 75,” said Chandler, “I want to make sure before I’m gone this memorial is in place.”

Chandler and other volunteers have spent the last five years trying to get a 9/11 memorial for the cities of Edgewood, Fife, and Milton.

Last year they received a 36-foot long piece of steel from the World Trade Center.

The rusted, mangled metal is from a section between floors 91 and 94 of the South Tower.

Except for a couple of parades, ever since the piece arrived in Pierce County, it’s sat in the City of Fife’s public works storage yard beside yard waste and piles of bark.

“Maybe I was a little overzealous in saying we’d have a ceremony on the 15th anniversary,” said Chandler, “But the system doesn’t work that fast.”

He estimates they need about $150,000 to hire an engineer to help construct a safe, permanent memorial site, likely in Milton’s Community Park.

Milton’s mayor, Debra Perry, hopes to see an “award-winning” memorial site for the steel someday in Milton, some of her citizens have raised concerns about it going in across the street from their homes.

She said finding the right place for everyone takes time.

“That’s where my job gets difficult,” said Perry, “I admire Jack all day long, I also represent those people.”
Chandler now hopes to have the memorial in place by 9/11’s 20th anniversary in 2021.

While the project has been more difficult than he thought, he refuses to give up. He’s determined to build the memorial so those too young to remember what happened that day can learn about it from the piece of steel.

Chandler is asking for donations to be sent to the following: