Voices and viewpoints that make up Washington's 8th Congressional District

An in-depth look at the political and geographical diversity in the eastern part of the 8th Congressional District. 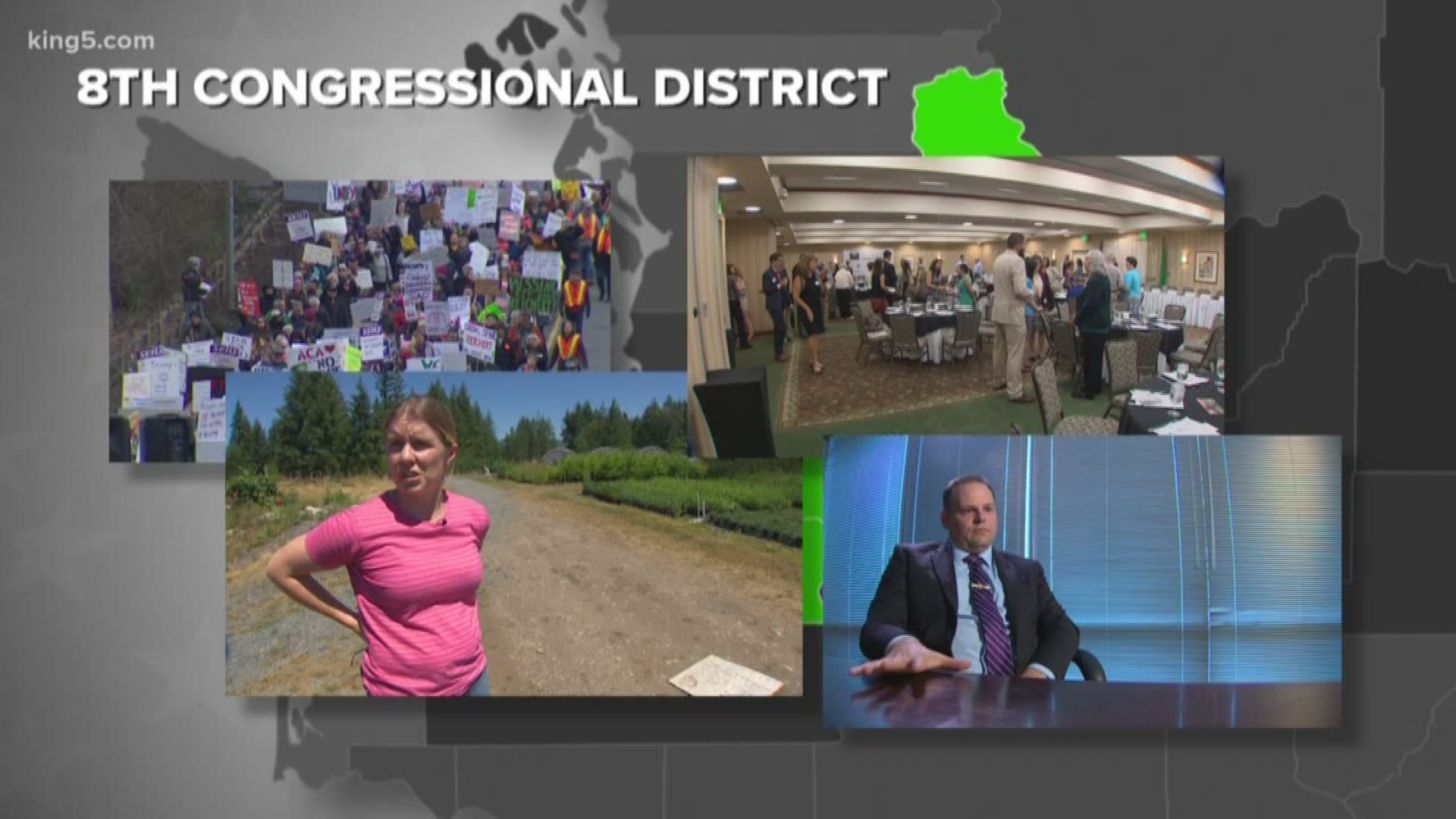 In early 2017, in the months following the election of President Trump, the protests began outside Republican Congressman Dave Reichert's Issaquah office. Since then, there have been dozens of demonstrations led by the progressive, grassroots group called Indivisible.

Organizers admit they pulled a page from the Tea Party movement that rallied Republican voters ahead of the of the 2010 midterms.

“Every day, we have daily actions for our team to do. Those can be calling our members of Congress, including our senators about legislation that is before Congress. We write letters to the editor; we have these rallies; we join with the Democrats to do canvassing every weekend,” described Chris Petzold.

“The secret is we've really built a community,” said Petzold.

It’s a community that ranges in age and backgrounds from working professionals to retired community members. Organizers have mobilized their members in response to recent policy decisions from the healthcare debate in Congress last summer to the recent family separations at the southern border in May and June.

While the Indivisible group's goal is to influence policy, they're most focused on November and trying to flip the 8th Congressional District from red to blue.

“I definitely want a progressive candidate to win, to represent my personal values,” said Petzold. “For the district though, it is a purple district, so we have to find someone who can appeal to both sides of the aisle, and I think we have some great options.”

Three Democratic front-runners are competing against each other ahead of the August 7 primary. Whoever makes it through will likely face a well-known Republican name; Dino Rossi is expected to easily advance to the General election, helped by his name recognition and a long history in Washington politics.

“I will vote pro-farmer every time, and right now the candidate that seems most pro-farmer is Dino Rossi,” said Sarah Howard, who helps her family run Eatonville Nursery in South Pierce County.

The property goes back to her great-grandparents. Today, it’s a wholesale nursery that also houses cattle, hay, blueberries, tomatoes and other produce.

“There’s always work to be done,” said Howard who describes the demands of running a farm non-stop.

“Most people are four generations removed from farming, they want to be pro-farming but they don't know what that means,” she described.

However, Howard says the political party that seems stronger and more interested in agricultural issues remains the Republicans. The Washington Farm Bureau has already endorsed Rossi, ahead of the primary.

Howard counts regulation, labor and immigration as some of the top concerns of Washington farmers.

“Having a workforce is huge, because if you don’t have someone to say pick your fruit, pick your vegetables, it doesn’t get to the market,” said Howard.

As for escalating trade tensions and retaliatory tariffs that are currently threatening to take a bite out of business for Washington's cherry and apple growers, she said many of the farmers she’s talked to are taking a “wait and see approach.”

The U.S. Chamber of Commerce has made trade the focus of a new ad supporting Dino Rossi, in an effort that appears aimed at distancing the Republican candidate from the Trump administration’s current trade tactics.

While the national chamber has already weighed in on the race for the 8th Congressional District, the Greater Issaquah Chamber of Commerce is still researching and interviewing all the candidates.

“The person that is going to be our representative can make or break our vitality,” said chamber CEO Kathy McCorry who held a candidate forum earlier this month.

She points to a growing region with big businesses such as Costco to small businesses and natural resources including a famous salmon hatchery.

“We’re just really looking for that right person, whether they have an R or D after their name, it's just somebody who is really committed to the future of this region and protecting our lifestyles,” said McCorry.

Environment, economy and jobs important not only to the chamber but the unions. The district includes a Boeing factory in Auburn and the ingredients for a clean energy hub to the east.

“We have some of the cheapest and cleanest electrical power in the country, maybe in the world, especially in Chelan and Douglas counties,” said Matthew Hepner, an electrician who lives in Wenatchee and represents electrical workers statewide.

“We have close access to Seattle International airport, and we have a long history with the tech industry, so we would like to see the candidates come up with solutions and strategies to leverage these assets and bring new middle class, family wage jobs here.”

While a number of state and local unions have scattered endorsements across the Democratic candidates, Hepner says he’s still assessing and looking for something specific.

“What we want to see is solutions, ultimately that's what myself and all my members, most people in the 8th CD is they want to see solutions,” said Hepner.

It's a goal that's shared, but the voters may have different opinions on how to get there and who should be Washington's new member of Congress.

“I believe it's the most important midterm of our lifetime,” said Chris Petzold of a race that’s drawing national attention.

While Democratic-leaning King County has nearly 60 percent of the district’s voters, the district overall is very purple, mixed with voters of all viewpoints and backgrounds.

“Never underestimate the blue collar, the working class,” said Sarah Howard. “They're out there, they're getting it done, and they're looking for someone who gets that.”

“There’s a lot of natural geography which divides the people with the Cascade Mountain range, but I think there's even more that brings us together,” said Hepner. 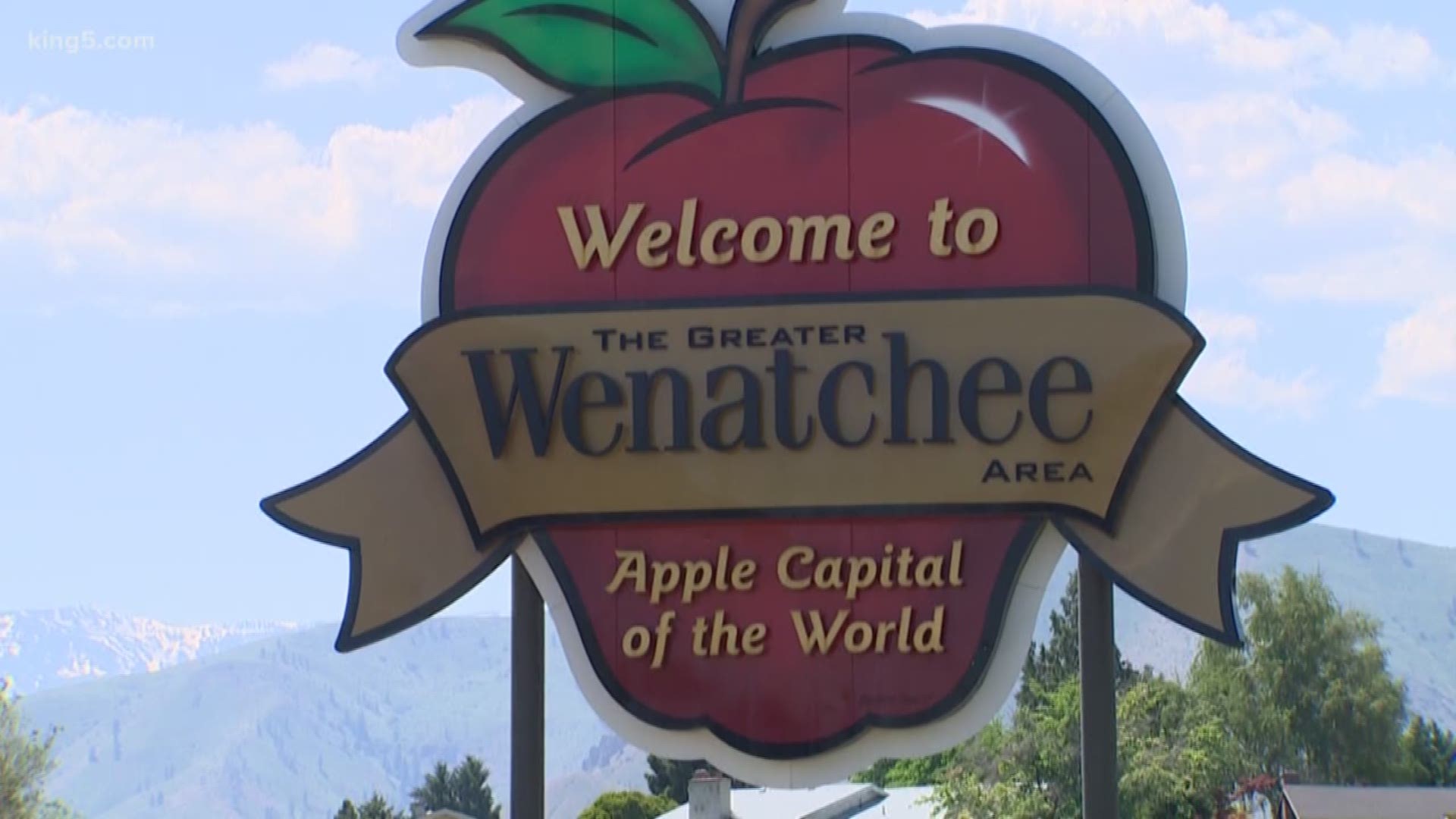