Miri Cypers and her husband Dave Rosenbaum received a threatening, anti-Semitic poster to their home in early 2020 from the Washington chapter of the neo-Nazi group. 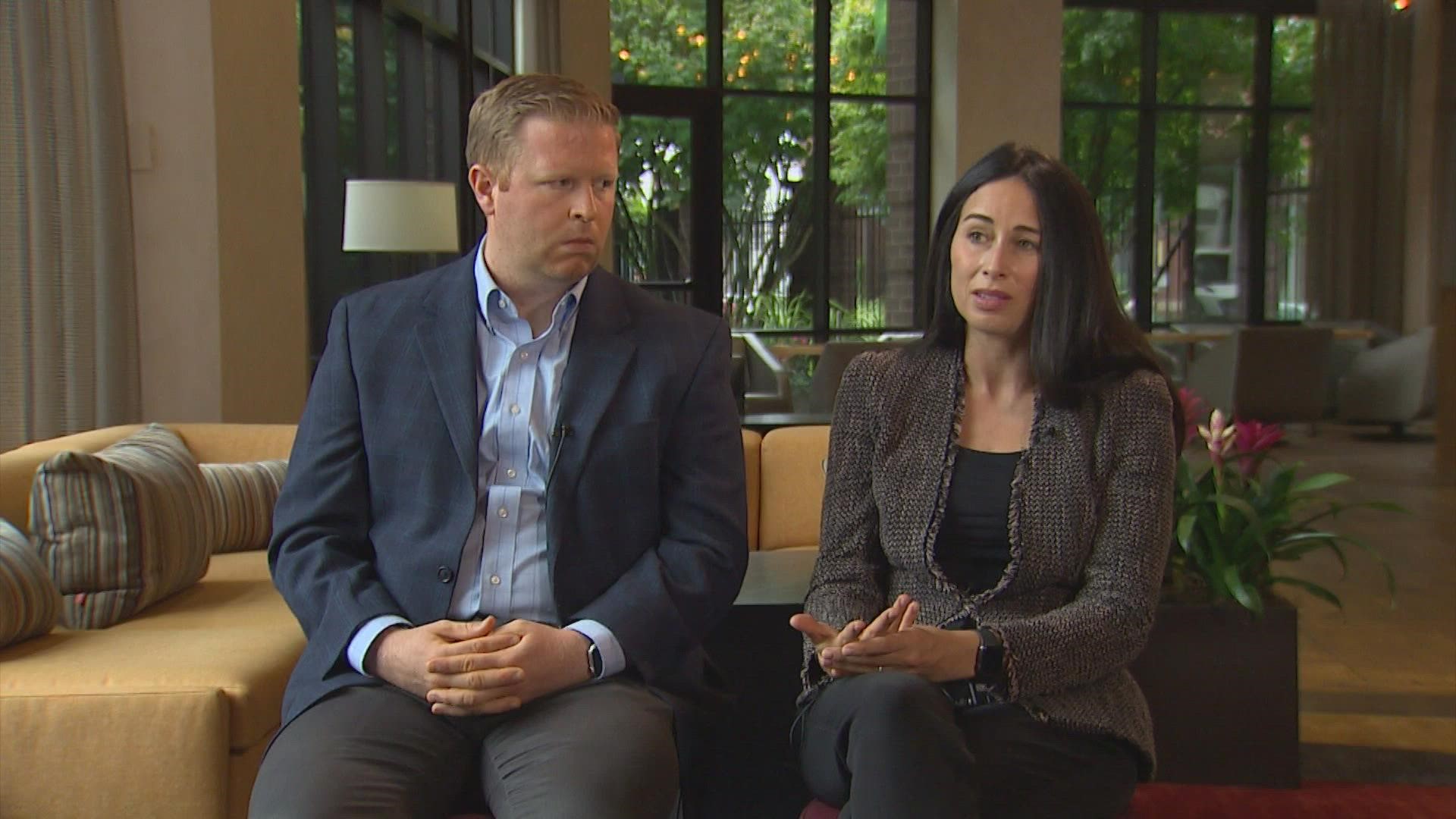 SEATTLE — A couple who was targeted by the neo-Nazi hate group known as Atomwaffen is speaking out after the group's alleged leader was found guilty on multiple charges this week.

Kaleb Cole of Arlington was found guilty on five counts including conspiracy, mailing threatening communications and interference with federally protected activities. The charges stem from his connection in sending threatening posters to the homes of journalists and advocates working to expose anti-Semitism.

Three others involved in the conspiracy were sentenced on Wednesday.

"We’re grateful that the justice system in this case worked," said Miri Cypers.

Cypers and her husband, Dave Rosenbaum, were witnesses in Cole's trial. They received a threatening, anti-Semitic poster to their home in early 2020.

"The images of someone standing outside of our house throwing a Molotov cocktail in, you know, with my name, and where I work in my address, saying 'your actions have consequences,' it just felt like such a direct threat to us," said Cypers. "This was something that was meant to not only silence people speaking out against hate and extremism, it was meant to be a direct threat. And retaliation is something I am concerned about.”

Cypers is the regional director of the Anti-Defamation League (ADL) of the Pacific Northwest. The ADL is an organization that works to address hate in society and track and investigate domestic extremism.

Her work put her on the radar of the Washington chapter of the Atomwaffen division, of which Cole is believed to be the leader.

"I mean, I think it really felt like an attempt by extremists to silence people that were fighting back against their ugly forces and their intention,” Cypers said.

At the trial, video recorded by an undercover informant was shown as Cole discussed the group's targets. Cypers was named directly by her job title in the recording.

"It felt like a direct target,” she told KING 5.

"We had a lot of people that perished at the hands of the Nazis in our family. And to see on the letter that said, 'You've been visited by your local Nazis' was terrifying. It invoked a lot of, you know, painful experiences from our family's past," Rosenbaum said.

The fear of what could have been still sits with Cypers.

"I mean, the other night, I was doing the dishes, and I was too scared to take the trash out of my house, because I was just scared how dark it was, and I just didn't want to be alone. And I asked my husband to come with me. And, you know, as a person who's strong and not fearful, it's, it's hard to admit that,” she said.

But the experience has also given her the drive to fight harder for those who face hate and discrimination.

"It's also given me more resolve to fight for the kind of community I want, where we, as Jews or people who are Black or Latino, or LGBTQ or people from any kind of marginalized community or minority can feel safe and secure and not targeted because of who they are. You know, that's why I chose to do what I do and work for the ADL. And I believe that everyone in our community needs to feel that same sense of security and inclusion,” she said.

The maximum possible sentence for Cole is 30 years, but prosecutors told KING 5 they don't expect his sentence to be that long. Cole is scheduled for sentencing on Jan. 11, 2022.