Truckers get a break on port air pollution compliance

Truckers say meeting the new regulation would cost them thousands of dollars. 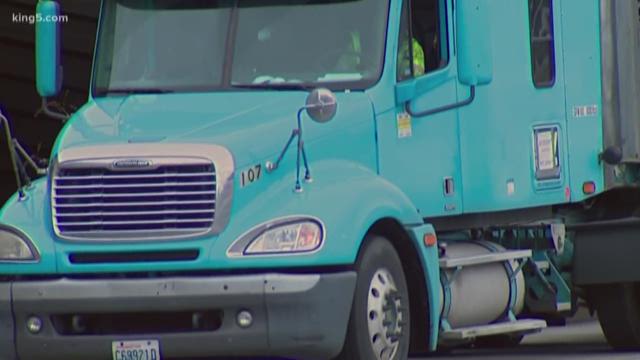 Independent truckers now have nearly another year to figure out how to meet new emissions standards at the Port of Seattle and the Port of Tacoma.

The Northwest Seaport Alliance, which manages the ports, extended the deadline to meet the new regulation to January 1, 2019.

The move comes after hundreds of truckers, most of them owner-operators, protested the rule at the commission meeting at Sea-Tac Airport.

The truckers, who represent nearly half of the 4,000 trucks cleared to work at the ports said the costs of buying newer-model used trucks, or equipping their trucks with exhaust cleaning technologies, was simply too expensive. They both testified and told KING 5 that buying another used truck that meets upgraded clear-air rules could cost $50,000 to $75,000 and that retrofits cost up to $8,000.

Many of the truckers make around $50 for each haul between rail yards and docks - about two to four trips per day - out of which they have to pay all their expenses.

The port requirements for clean air are more stringent than state or Federal clean air regulations. The port is also trying to cut emissions from ships and over a longer schedule, emissions from dock equipment which move containers around without hitting the streets.

A 1994 or newer model year truck, or even the engine in an older truck, meets the current clear-air requirements. The new rules call for 2007 emissions technology or newer.