Crews are continuing to work on cleanup after six tanker train cars derailed in the Custer area of Whatcom County and caught fire Tuesday. No one was injured. 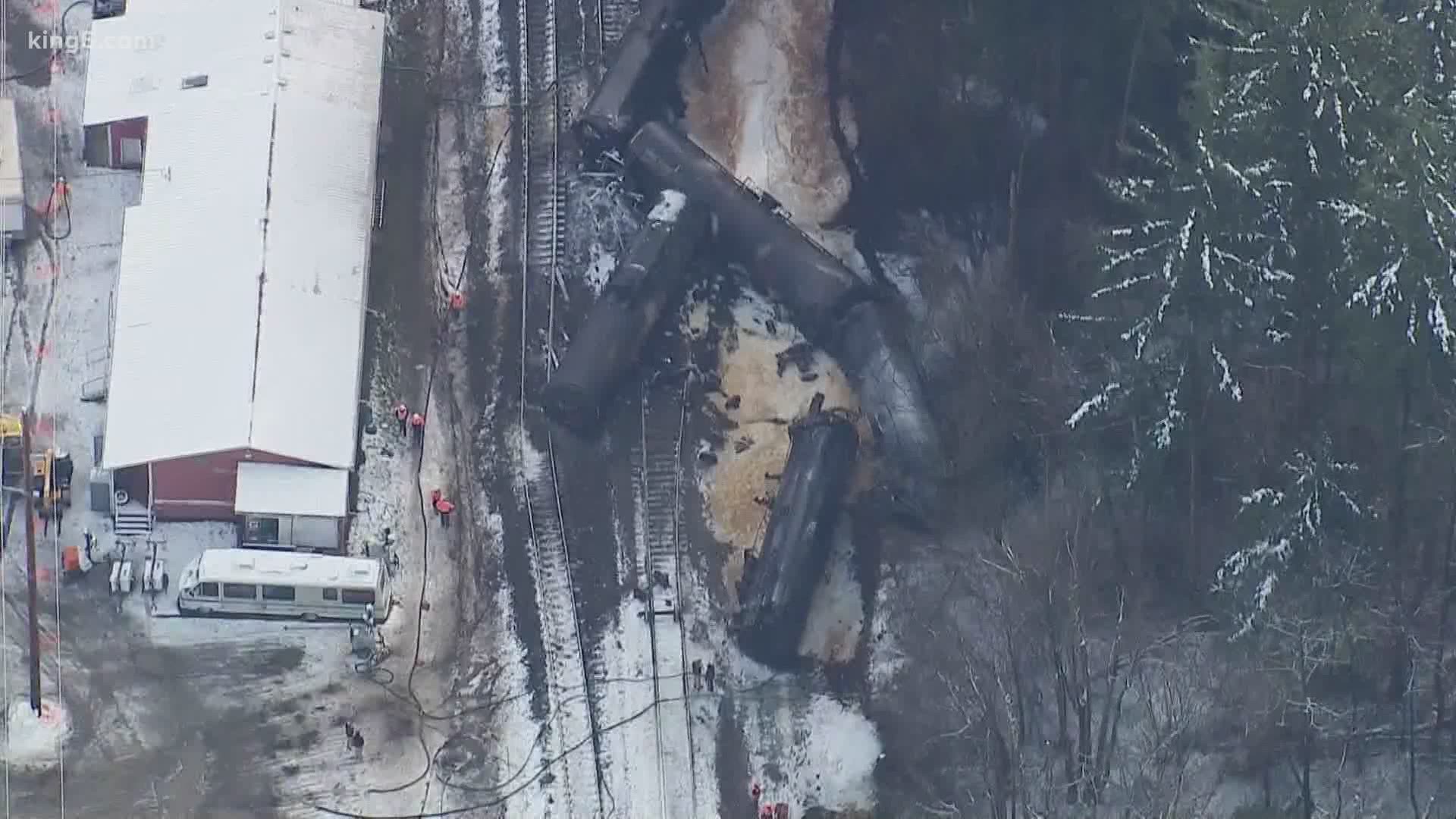 WHATCOM COUNTY, Wash. — Federal investigators are assisting local authorities in investigating what caused a tanker train hauling crude oil to derail in Whatcom County Tuesday morning. There have been no reported injuries.

Cleanup continued Wednesday as crews work to clear the train cars, debris, and crude oil that leaked from the cars. Officials said it could take months to get the area fully cleaned up.

During a press conference Wednesday morning, a spokesperson for BNSF said three cars ruptured in the derailment and it's still unknown how much oil may have leaked.

The Washington Department of Ecology is on the scene to examine the environmental impacts of the derailment and fire. So far, the department's spokesperson David Byers said their crews have found minimal environmental impacts from the spill and no wildlife impacts, but they will continue to investigate.

An estimated six tank cars derailed near Custer at 11:46 a.m. Tuesday, according to the Whatcom County Sherrif's Office. Two train cars burst into flames. Oil continued to burn in two of the tanker cars Tuesday night, but the final flames were put out around 8 p.m., officials said.

Everyone within a half-mile radius of 7500 Portal Way was told to evacuate after the derailment. Evacuations were lifted just before 5 p.m. Tuesday, but residents were asked to stay indoors. The sheriff's office warned everyone to avoid the derailment site.

I-5 was closed between Grandview Road and Birch Bay Lynden Road for about an hour on Tuesday afternoon, but has since reopened. Local road closures are still in effect, according to Trooper Heather Axtman.

The cause of the derailment remains under investigation.

Jordan and Jordyn Smith just moved into their new home in Custer.

“The house was kind of our dream house," said Jordan, who works at a nearby oil refinery. "There has to be a catch and I guess this was it.”

“We could see the smoke from our house and we just bought our house two weeks ago," his wife Jordyn said. “For me, it was getting our daughter out, and our dog and grabbing anything that was, you know, super important to us and getting it put it in the car.”

The Smiths were able to evacuate to a nearby relative's home for the day.

A spokesperson for BNSF said two workers were on the train at the time of derailment and the train included around 108 cars. The train was traveling to a refinery in Ferndale.

Officials with BNSF said Wednesday crews are working to recover the remaining oil from the train cars and will transport it to its final destination. 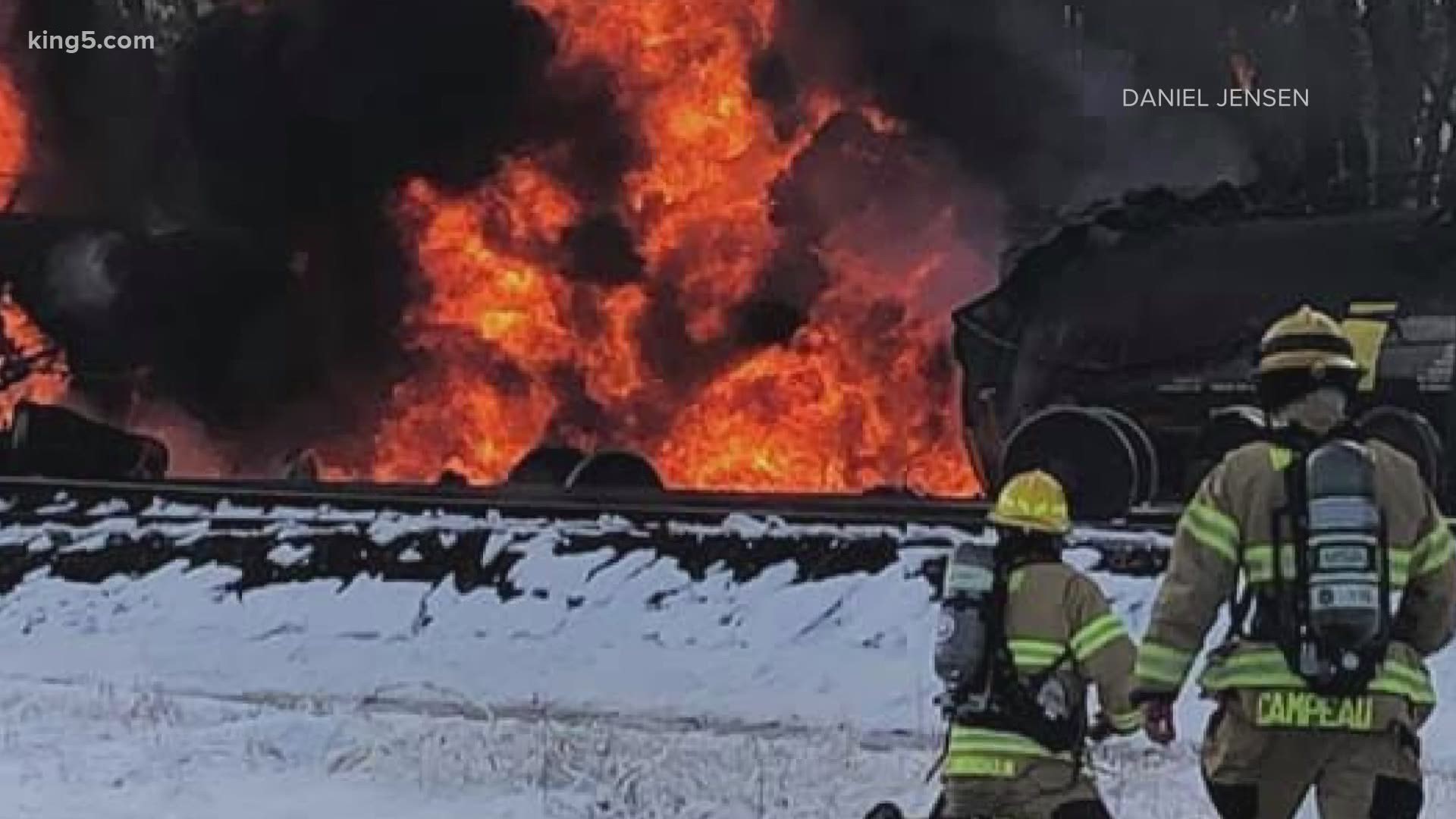 FBI Seattle issued the following statement Tuesday, "Investigators are on the scene assisting local partners to determine the facts of what happened. At this point, it would be speculative to connect other events with this incident. FBI Seattle encourages anyone with knowledge of the train derailment to contact tips.fbi.gov"

Two women from Bellingham were arrested Nov. 28 on charges of a terrorist attack on a railroad facility by allegedly placing a "shunt" on the tracks.

The criminal activity from November has not been linked to Tuesday's derailment.

A "shunt" disrupts the low-level electrical current on the tracks and can disable various safety features. It's comprised of magnets and wires that are stretched between the tracks and they disrupt the systems that indicate that a train is on the tracks.

According to the criminal complaint, the FBI’s Joint Terrorism Task Force has been investigating the placement of shunts on the BNSF tracks since Jan. 19

“Since January, there have been 41 incidents of shunts placed on the BNSF tracks in Whatcom and Skagit counties—causing crossing guards to malfunction, interfering with automatic braking systems, and, in one case, causing the near-derailment of tanks of hazardous chemicals,” said U.S. Attorney Brian Moran.

RELATED: Two Bellingham women arrested on charges of terrorist attack at a railroad