We often think of earthquakes originating from one single spot, spreading out like a bulls-eye. But the Cascadia Subduction Zone would be more like ripping a sheet. 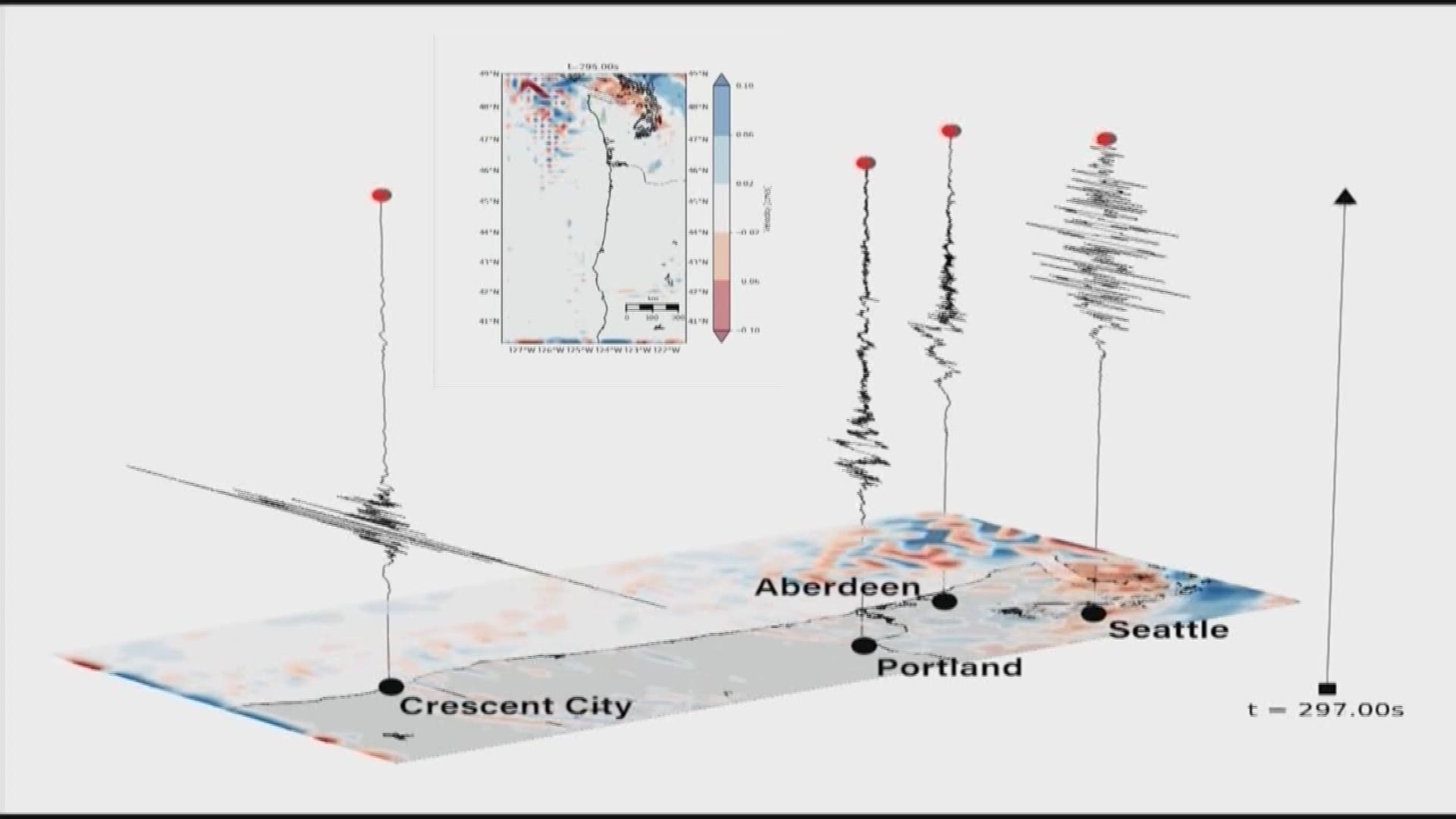 The shaking from a magnitude 9-plus earthquake felt in western Washington's population centers will vary depending on the epicenter of the quake.

"Where the earthquake starts really matters," said Erin Wirth, a research geophysicist  for the U.S. Geological Survey (USGS) based at the University of Washington.

What Wirth and USGS Geophysicist Art Frankel found using more than 50 super computer simulations is the amount of shaking from a Cascadia Subduction Zone earthquake will vary depending on the location.

The Cascadia Subduction Zone is a giant 600-plus mile long fault that runs from Cape Mendocino, California, north past Oregon, Washington and Vancouver Island. It's a fault where pieces of the ocean floor known as tectonic plates, are stuck to the North American plate.

Every 300 to 500 years, the pressure between the two slips and a massive earthquake is the result.

"We can see a factor of ten difference in between these scenarios depending on where the earthquake starts," Wirth said.

RELATED: Are you ready? Preparing for the big one

In one scenario, the rupture of the fault starts closer to the Oregon-California state line. In another, the quake starts off the northwest tip of Washington. It’s easy to think that a quake starting further away would be better for Seattle, but research suggests that would be incorrect.

"And that's because when the earthquake starts far away from Seattle, that means all those seismic waves have time to pile up on top of each other before they actually reach Seattle, and that results in stronger shaking," said Wirth.

Wirth said among the scenarios run, the worst shaking factor for Seattle could be 10 times worse than the most mild case where the rupture would start in the plate boundary closest to the city, such as under the Olympic Mountains.

We often think of earthquakes originating from one single spot, spreading out like a bulls-eye. But the Cascadia subduction zone would be more like ripping a sheet, a tear shaking the surface as it goes along, with waves getting stronger then weaker again with a quake expected to last from five to six minutes.

Seattle has an additional problem and that is part of the surrounding area sits in a giant basin filled with sediment, which would make the shaking last longer because earthquake energy would radiate and reflect inside the basin, like dropping water into a bathtub.

While the bathtub analogy is about energy waves in the ground, those same waves of energy in the water bring another devastation: tsunamis.

“It's important to see how tsunami waves travel through Washington," said Corina Forson, chief hazards geologist for the Washington Geological Survey, part of the state Department of Natural Resources.

In the latest research released this summer from her agency, communities from deep in Puget Sound to Bellingham are proving more vulnerable than previously thought based on computer simulations.

Tsunami waves originating off out in the Pacific could bring five-foot waves to Seattle's waterfront shoreline, to more than 10 feet as that wave energy gathers in Tacoma's Commencement Bay which is even further away.

Forson said when she started showing the animations to people early, people found it highly relevant. "I think it hits home because on this level they can pick out where they live."