Crowds rang in the new year on the slopes and the Summit at Snoqualmie says business boomed over the holiday weekend. 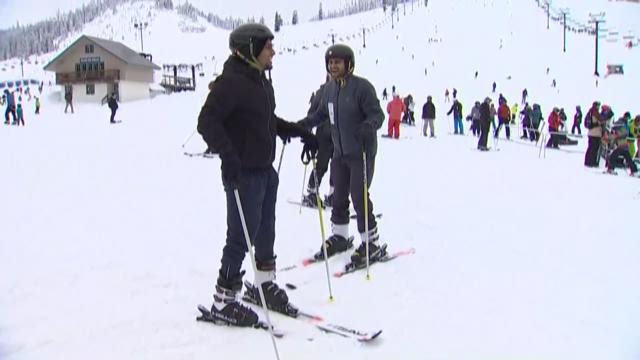 The Summit at Snoqualmie welcomed heavy holiday business over the last couple weekends, but the holidays aren't the only reason crowds have grown in lesson lines over the last five years.

January 1, 2018, was a big day for Amit Kumar. He set out to do something no one in his family ever has.

"Why this? Why skiing? I wondered about a new activity I've never done before. I've seen it in the movies. It looks exciting. I think I'll have fun here. I think it's going to be good," he said.

Kumar moved to the Seattle area from India nine months ago to work for Amazon. Where he's from, they don't even have snow. Monday, he skied for the first time and he was not alone. Most of the skiers in his class were first-timers.

Besides trying something new, the group had something else in common. Nearly half of them were immigrants like Kumar, a trend the Summit's seen increase over the last 5 years.

"The amount of new skiers and snowboarders from overseas. People who have moved here in recent years, a lot of technology type employment, and they want to do what their colleagues are doing, said spokesman Guy Lawrence.

The Summit at Snoqualmie is increasingly running out of space in its beginner ski and snowboard classes. More than half of the students are typically immigrants. The newcomers help boost business but also expand the experience for everyone.

"It is fantastic to see a melting pot of humanity coming up and enjoying it," Lawrence said. "Sitting on a chairlift forces you to sit there and chat with someone for four or five minutes as you head up the hill. Everyone's got a little bit of a story or a reason for why they're there."

It didn't take long for Kumar to make his first attempt. He says it's both tough and fun, but his first time on skis won't be his last.