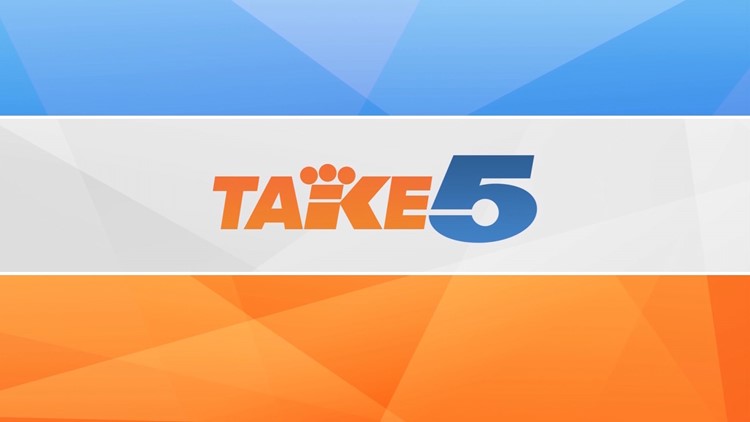 Take 5 empowers you with the knowledge, resources and inspiration to do something that enriches you, your family, or your community.
Author: KING
Published: 1:36 PM PDT April 2, 2018
Updated: 12:05 PM PDT August 28, 2019

SEATTLE — KING 5 launched a new show on April 16, 2018, at 4 p.m. called Take 5, and it has a new mission! We want you to come away from the show not just informed, but inspired, entertained and energized.

It's a casual conversation about the news, with storytelling centered around people, places and ideas that leave you feeling something positive.

Take 5 will empower you with the knowledge, resources and inspiration to do something that enriches you, your family, or your community.

And the best part: you are an important part of the show. Take 5 is made up of a team of hosts – and you, the audience! Be part of the real-time, on-air conversation by texting 206-448-4545. Join the 5 Hive Facebook Group to be part of our digital community of people who want to do good. You might even get invited to be on the show live, via FaceTime or Google Hangout.

Whether you’re a curious newbie in Seattle or a proud, long-time resident of Western Washington, Take 5 wants to help you feel more connected and a part of something bigger here in this incredible place you call home.

I’m thrilled to be a co-host and producer for Take 5. I’ve been fortunate to grow up here in the Seattle suburbs. I’m an organic reflection of our city’s unique personality. I have an aversion to wearing ties. I don’t even support ties in sports!

My role on this show is to be a creative voice for all things local. My sense of humor is part of the package and my goal is to help inform and entertain in a way you don’t often see on local TV. I believe comedy is disarming and is a great way to communicate information that may be tough to talk about. I look for the positives and have bursting pride for this area – even Kent.

Hi there! I’m honored that you’re taking time to learn more about Take 5 and my role on the show. When I left broadcast news three years ago, I never in a million years thought I would return! Years of traditional news coverage had worn me down mentally and spiritually, and I wanted to use my skills for something uplifting and more meaningful.

I used the time away to write stories I believed needed to be told. And then KING 5 called! I was hesitant at first to jump back in, but it was clear they wanted to use their huge platform to not only inform, but to advocate and inspire. I’ve always said, “If you want a new chapter in life, you must be willing to turn a page!”

Hey everyone. One thing you’ll immediately notice about me is my annoying positive outlook on life. You’ll find Tony Robbins quotes on my Twitter page, self-reflecting books on my desk, and my podcast list consisting of Tim Ferriss, Oprah Winfrey, and Bigger Pockets. I’m also a bit of a real estate nut.

Before I took the evening meteorologist position with KING 5 I was working as a lifestyle host and morning meteorologist in Austin, Texas. That’s such a special city. I was there for about five years, but before that I was back here in the Pacific Northwest. I’ve lived in the Tri-Cities (Eastern Washington) and Eugene, Oregon. I miss parts of Austin, but you can’t deny this PNW beauty. It feels good to be back in my favorite city in the U.S. Heck, I can surf and snowboard in the same day, which I have yet to do but it’s the #1 goal on my short-term bucket list.