Save big on Halloween costumes at thrift stores

You can create an easy and inexpensive DIY Halloween costume by shopping at a thrift store. Goodwill even has "costume experts" to help shoppers put together one-of-a-kind looks. 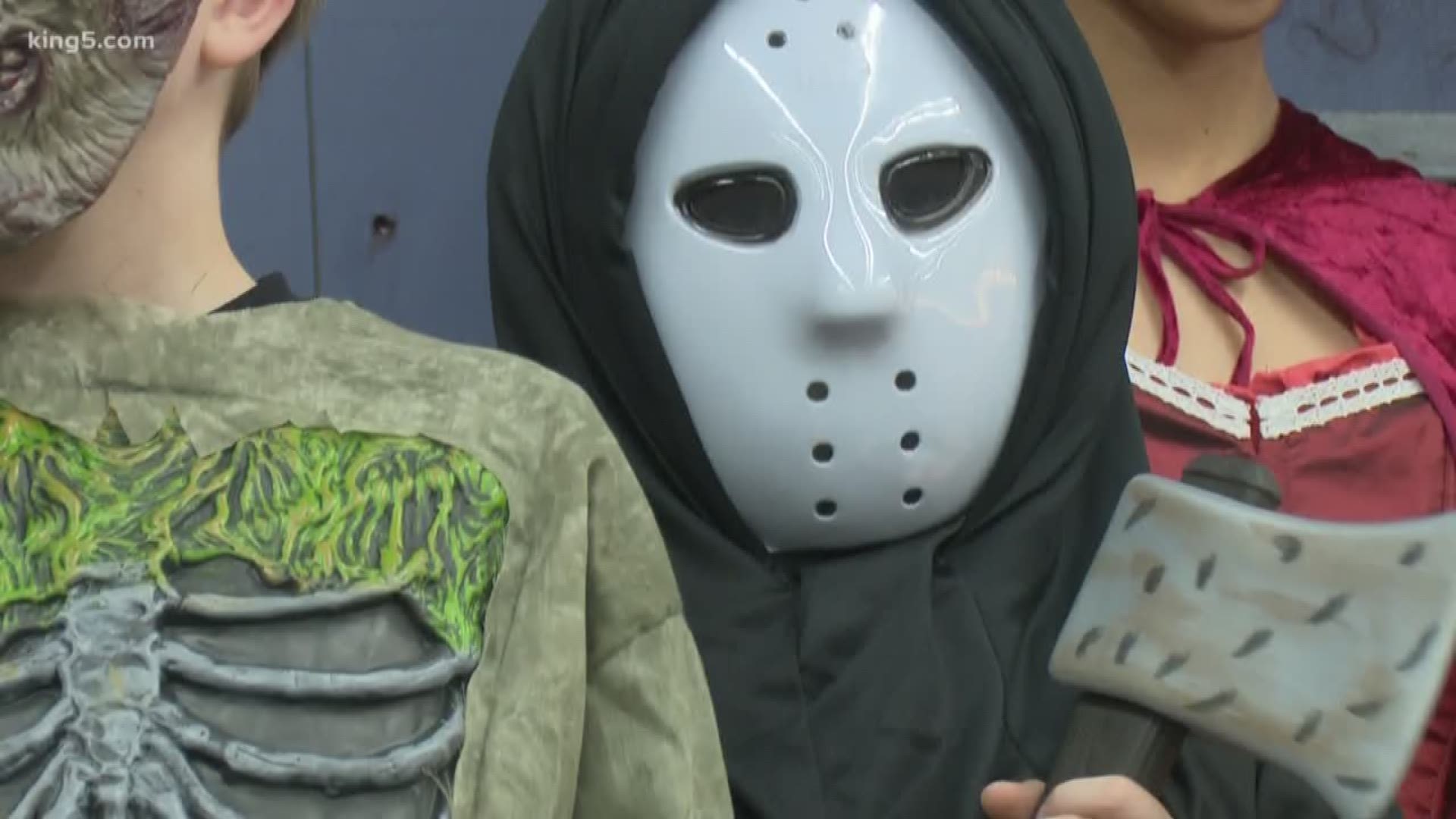 Don't have a ton of cash to spend this Halloween? No need to freak out. With so many quality thrift shops in Western Washington, it's easier than ever to find a costume without breaking the bank.

The Goodwill in Tacoma says Halloween is its biggest season in terms of sales.

"The customers who maybe don't think about shopping thrift will come in for the first time," said Diana Reinhardt, Goodwill's director of retail.

Cashier Morena Ledesma looks forward to Halloween all year long. She wears a different costume each day at work. She figures she has more than 100 looks at home.

Ledesma has Halloween on the brain year-round. As she sorts through donations, she sets aside pieces that work for costumes.

"My ideas usually start with either a shirt or a skirt or a tutu, even just a hat. I can do anything. As long as you show me what you're interested in I can make you a whole outfit just by looking at that one piece," Ledesma said.

Zombies and unicorns are big sellers this year, as are costumes inspired by the video game Fortnite.

Can't find something that works? Employees can always take a piece of clothing, cut it up and toss fake blood on it.

"We can make it easy, and it's all right here for cheap," Ledesma said.

Goodwill's website also has a special page devoted to Halloween. The site offers makeup tutorials and shows how shoppers can create a costume with up to three items from the thrift chain.

Shoppers can feel good about the money they're spending. Their dollars help Goodwill provide free job training, career services, and youth programs to about 8,500 people in our region.

"The [Halloween] season generates about $9 million to our year. Our funding goes to support folks in 15 counties. It's a win-win," said Reinhardt.

Here are some DIY ideas from the creative minds at Goodwill:

A Wrinkle In Time – The Disney movie based on the classic novel came out earlier this year, and brought some otherworldly inspiration. For Mrs. Which, choose a metallic silver top and make some caged armor out of pipe cleaners (don’t forget stick on charms for your eyebrows!). Mrs. Who’s layered cape can be recreated with different fabrics (or old sheets!) and paint pens to add literary context. To channel Mrs. Whatsit, grab a plain white nightgown and add a ruffled boa and a braided red wig.

Smallfoot – If Halloween is chilly this year, you’ll be happy you went as one of the characters from Smallfoot, the new animated movie about a Yeti who tries to prove humans are real. This look requires head-to-toe white fur or shearling (check the coat section!), with some felt blue horns.

Monsters – Grab some brightly colored attire, and craft some eyes, noses, and mouths out of felt,and stick them to yourself. Monsters are a wonderfully adaptive category and only limited by your imagination (or your nightmares).

Pirates – Striped shirt or ruffled blouse, cutoff pants, silk scarves (for head and waist), leather boots, oversized hat, eye patch. If you find something with a skull and crossbones on it, even better. Think: Johnny Depp in Pirates of the Caribbean.

Werewolves – Since modern werewolves only seem to go shirtless, you can really save big on this one, guys. For Twilight's Jacob, all you need is black jeans and a temporary tribal tattoo; for True Blood's Alcide, regular jeans and layered silver necklaces. Add a cotton henley and a plaid flannel shirt for modesty and authenticity to either one (especially if the forecast is chilly).

Fairies – Join Sookie Stackhouse and her ethereal kin in the fantasy of fairyland with a simple, gauzy floor length dress, natural hair pulled back with a headband, glitter body paint, and a mason jar covered in glow-in-the-dark paint.

Zombies – If you're a fan of the Walking Dead, then you know anybody among us could turn zombie at any moment. Grab regular street clothes (or mimic those of your favorite zombie character), powder your face and circle your eyes in black, pour fake blood on yourself liberally, then raise arms and moan scarily. Fright night, indeed!