Fire crews were given 18 hours to prepare for a mission into what has been called a "hellscape." 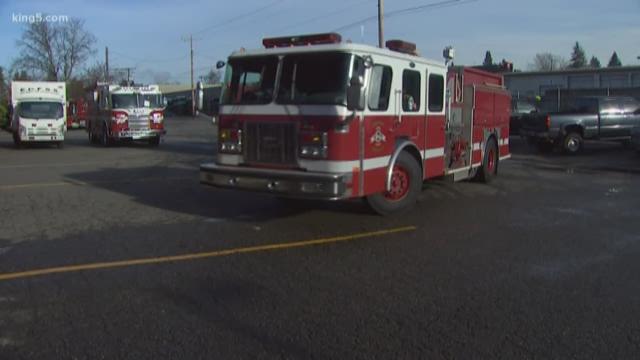 A crew of Snohomish County firefighters left for Southern California Friday afternoon to do battle against wildfires that are raging out of control.

They will be two weeks unlike anything 26-year-old Bryan Kerr has every experienced.

"Right now I'm just focused and thinking about what needs to be done when we get down there and getting back to home to my family," said Kerr.

Kerr's family includes his baby girl, Layla, who just had her first birthday.

"She and my wife will be number one on my mind when I'm down there," said Kerr, who is with Fire District 7 in Monroe.

About 200,000 acres are burning out of control. Twenty-two firefighters from Monroe, Gold Bar, Getchell and Alger will arrive Saturday. The crews will primarily be charged with protecting people's homes.

The mission is Strike Team Leader Ryan McCarthy's second deployment to fight Southern California fires in as many months. Those infamous Santa Ana winds will be an adversary unlike any he's seen in 14 years of fighting wildfires.

"We don't want to get ourselves over-committed to something we're not used to," said McCarthy. "There's no fire that's worth any of our lives."

It is a 16-day deployment that will hopefully have the crews back by Christmas Eve and Bryan Kerr back to his wife and baby.