The West Seattle Bridge isn't set to reopen until mid-2022. 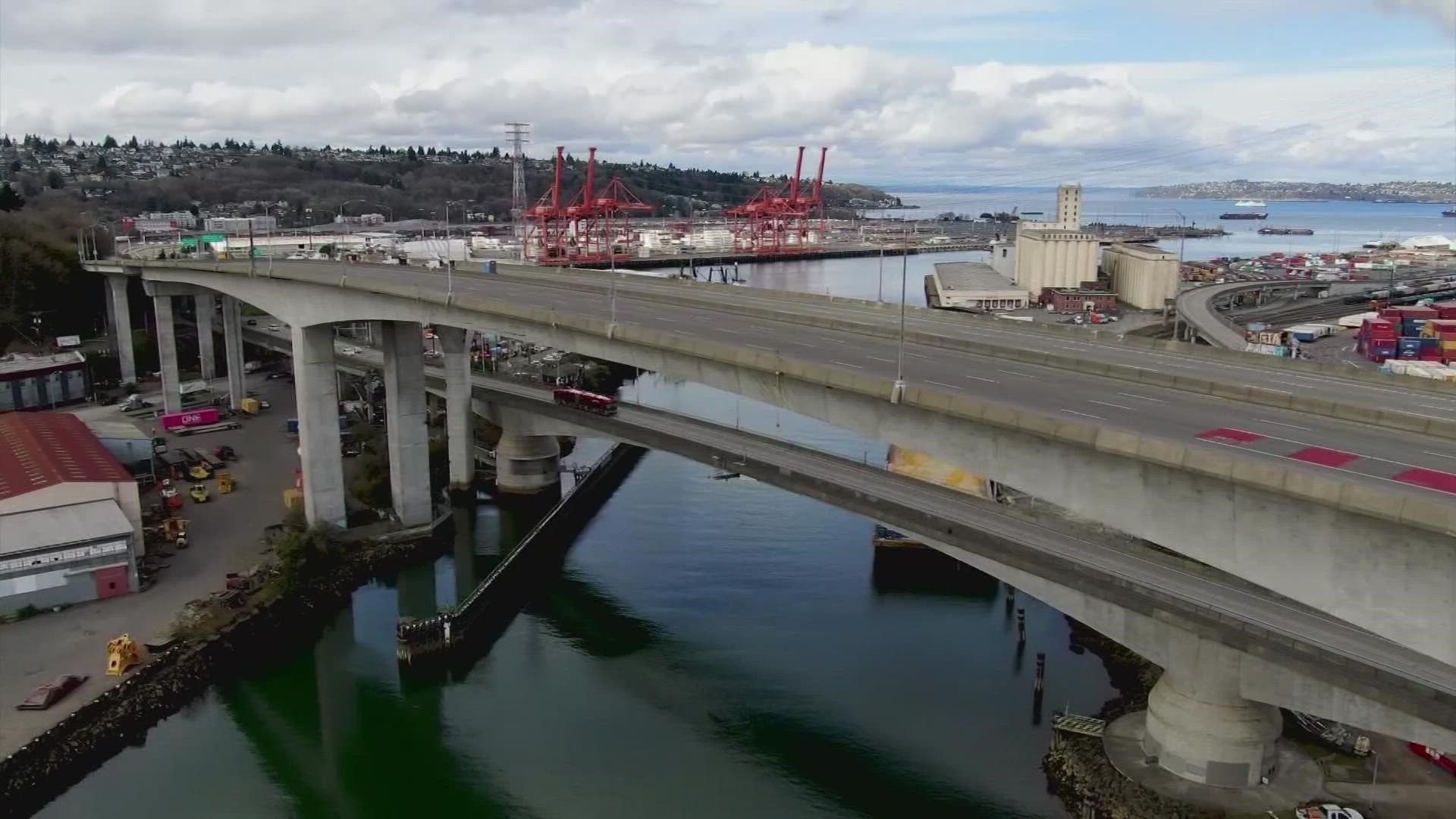 SEATTLE — It has been more than 18 months since the West Seattle Bridge closed.

For West Seattle residents, trying to leave or return during peak hours can sometimes take twice or triple the amount of time as their normal commute.

For some business owners, that added time is costing them.

“The West Seattle Bridge closing has been a heavier impact on my business than COVID,” said Ben Oleson of Zook & Oleson Gardening Inc. “It’s the biggest thing that’s affected my business in 21 years.”

Before the bridge closed, the Seattle Department of Transportation (SDOT) said it carried 100,000 people a day. Some of those people are now using West Marginal Way, where SDOT says use is up 200%.

Heavy backups on detour routes cause Zook & Oleson's landscapers to clock in earlier.

“My payroll is up. Everything I can bill is down,“ said Oleson. “So, the margins are just much less than half of what they used to be.”

Oleson is also having to decide which jobs outside of West Seattle are worth the trip.

“We get a ton of new calls,” said Oleson. “I’m in a position where I’m concerned that every new job might be losing me money, not making me money.”

The congestion is also affecting business decisions and increasing costs for Niederberger Contracting.

“Frank Lumber delivering a load of doors to me is now $100 to West Seattle. It used to be $30 or $35. There’s inflation in there too, but everybody laughs at West Seattle now,” said Seth Niederberger.

“It’s not cost-effective for us to go take jobs out of West Seattle,” said Niederberger. “It becomes such a logistical headache that we have denied people.”

Both owners think having access to the Spokane Street Bridge (Low Bridge) could help their businesses. Neiderberger and Oleson applied for use but were denied.

“Retail and restaurant workers are getting those passes, seems odd that small businesses like ours were denied,” added Neiderberger. “Flat out denied. No explanation, just denied.”

“My business couldn’t get any closer to the bridge. Our shop is right under the pylon, and, I don’t know, we didn’t get the permit,” said Oleson.

KING 5 asked SDOT why certain small businesses like Oleson’s and Neiderberger’s didn’t qualify for access. It released a statement that said in part:

West Seattle restaurant and retail businesses were chosen for low bridge access based on several factors. While COVID-19 and the West Seattle Bridge closure have affected all people and businesses in West Seattle, these two business sectors have been the most disproportionately impacted by COVID-19 as measured in job and economic loss. Through our ongoing outreach efforts, we also heard how these types of businesses were especially struggling due to challenges receiving and transporting supplies, and that limited access to the low bridge for essential supply runs could potentially make all the difference for some of these struggling businesses.

Unfortunately, changing the current definition of retail or expanding business access to tradespeople or professional services is not possible without creating severe traffic that would block emergency vehicles and all other trips over the low bridge. The low bridge only has room to carry about 300-400 trips per hour, depending on the time of day, and there are about 4,600 businesses licenses for professional services in West Seattle. We must stay within this capacity limit to maintain reliable access for emergency vehicles, transit, and freight.

SDOT said it is on track to start construction in November and to open the bridge in mid-2022.