A Sikh man who dresses up as Captain America is visiting schools in Western Washington to highlight issues of identity, race, and adversity. 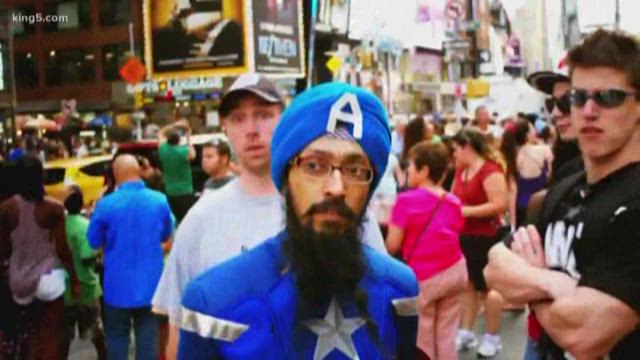 Captain America is landing in Western Washington schools. But it's not the same comic book hero you're probably used to.

Vishavjit Singh of Harlem, New York is a software engineer by day, and a cartoonist by night. But Singh, a devout Sikh, complete with traditional turban and flowing beard, also travels the country teaching children about stereotypes and labels.

"I generally feel like beyond our looks, we have a lot in common as opposed to, 'I don't need to ask you where you're from. I know who you are,'" said Singh.

Despite being the fifth biggest religion in the world, many Americans don't know a lot about Sikhism.

To illustrate his point, Singh wears a full Captain America costume in many of his presentations, forcing others to reassess the way minorities like him are perceived in America.

"I'm never offended when kids ask me, 'Hey what is this thing?' I say, 'Good question, it's a turban,'" he said. "In a lot of ways, kids can tear down barriers much better than adults."