A few neighbors in Shoreline are banding together, in hopes to sell and cash in on their property. 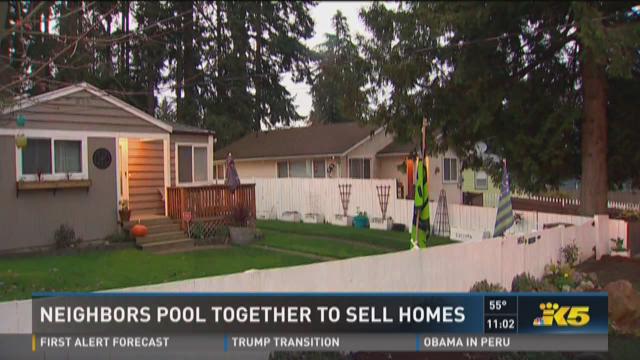 In Shoreline, we’re seeing quite a different response from a handful of homeowners.

Five neighboring homeowners near the future Shoreline light rail station have formed an assemblage. They plan to put their lots, which total almost an acre, on the market in two weeks at a total cost of $3.2 million.

“The properties that we’re selling with the upzone are worth significantly more than what they were as the pure single-family homes that they are,” said Matthew, who is part of the assemblage and asked KING 5 not to use his last name for fear of being targeted.

The five homeowners are using CityBldr as an intermediary with developers. It’s an online tool that uses machine-learning to show what properties are worth to developers.

CityBldr had an architect draw up plans for an apartment building that could fit on the plot of five homes. The sample design shows commercial use on the ground floor and three residential floors that could house about 150 units.

“It came as a significant surprise,” said Matthew.

He said he bought the place about a year ago for $375,000 and said it was recently appraised for $504,000. As part of the new deal, he will ask developers for $689,000 – a 37 percent increase from the current appraised value. He and CityBldr credit the increase to the five property owners banding together.

But that wasn’t Matthew’s first choice when he bought the house.

“We bought this place to live in and to settle down,” he said.

Jeff Bumgardner of CityBldr said a couple of smaller assemblages have popped up around the Shoreline light rail station.

“It’s quite a bit more complicated than your typical development deal,” said Bumgardner.

Another neighbor, Eric Hagen, said he’s currently not interested in selling unless the neighborhood changes too much.

“It would be unfortunate. I think it would turn into downtown Ballard where there are big apartment buildings,” said Hagen.