A fire broke out Saturday on cargo ship ZIM Kingston, which lost 40 containers due to high winds on Friday. 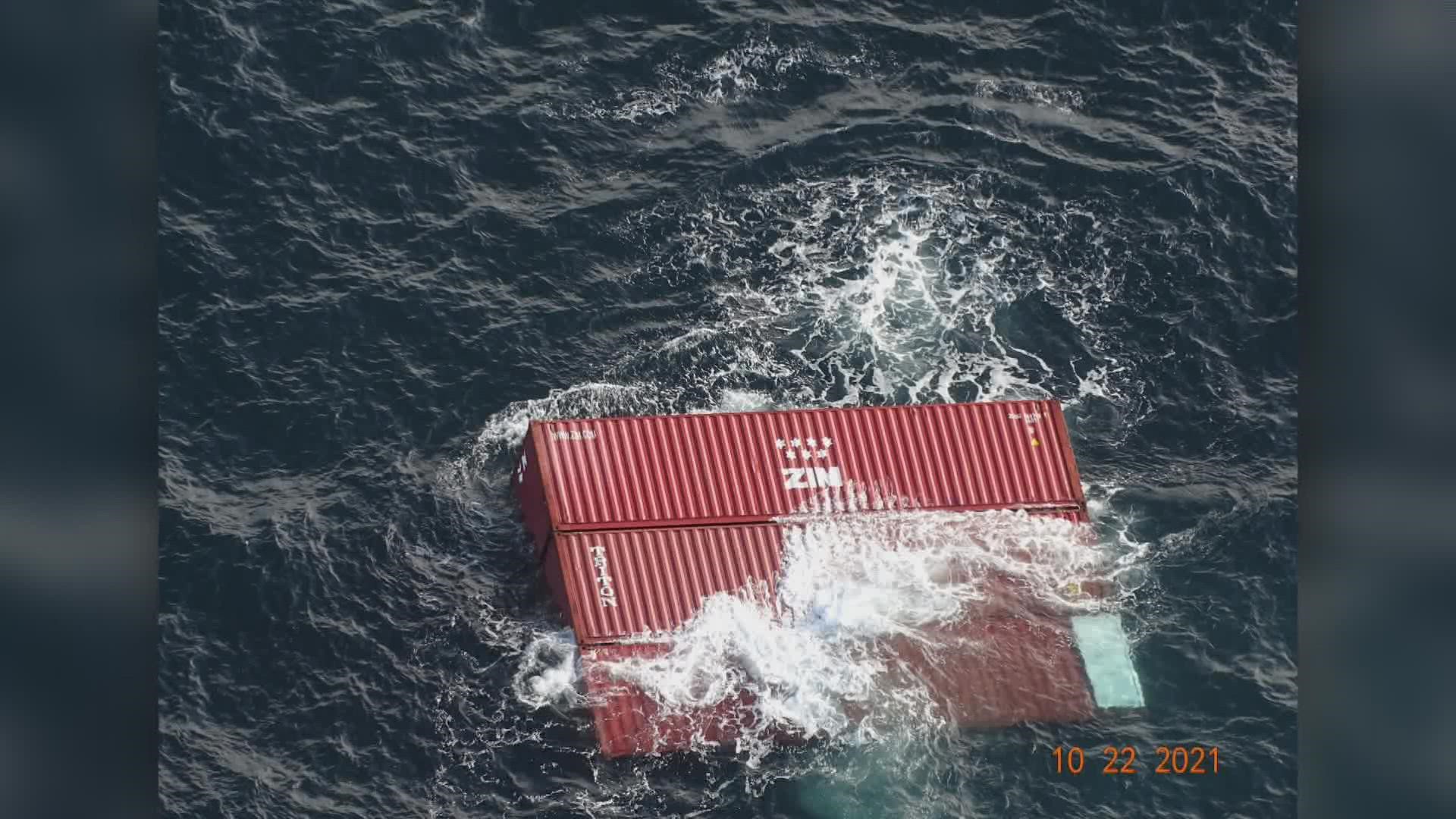 VICTORIA, BC — A fire broke out Saturday in 10 containers aboard cargo ship ZIM Kingston near Victoria, British Columbia, a day after high winds caused the inbound vessel to lose 40 other containers in the Strait of Juan de Fuca.

According to the Canadian Coast Guard, 16 people were evacuated from the container ship after the fire started in ten containers on board.

According to officials, at least two of the containers that caught fire contain hazardous materials identified as potassium amylxanthate.

Because of the chemicals in the containers, first responders were unable to apply water directly to the flames.

An emergency zone was established at 2 nautical miles around the cargo ship to protect other ships and mariners.

The fire was "stabilized" by Sunday afternoon, but crews have still been unable to board the ship Monday due to high winds.

The fire remained stable overnight Sunday into Monday. Containers continue to smolder while crews apply water to the hull of the ship and nearby containers.

The #ZimKingston remained stable overnight. The salvage crew from Resolve Marine are on scene but due to the current weather, have been unable to board the container ship. pic.twitter.com/iYdBWoTFhN

The Canadian Coast Guard said Monday that there are still no impacts to human health in the area.

"The U.S. Coast Guard continues to monitor the situation, engaging with our Canadian and tribal partners to respond and support as requested while this incident continues to develop," said Capt. Daniel Broadhurst, chief of incident management for the 13th Coast Guard District.

The fire on the #ZimKingston has been stabilized. Depending on weather tomorrow, hazardous materials firefighters will board the ship to fight any remaining fires and ensure the fire is out. pic.twitter.com/IKIhY5Ayrm

On Friday, 40 containers were lost off of the ZIM Kingston about 43 miles west of the Strait of Juan de Fuca entrance, according to the U.S. Coast Guard Pacific Northwest.

The incident happened when the ship listed to its side due to rough seas.

As of Friday evening, 35 containers have been observed floating to the north of the strait entrance.

A helicopter from the U.S. Coast Guard Air Station Port Angeles captured these aerial images of some of the adrift containers.

The vessel was en route to Canada and is now in Vancouver, British Columbia, according to the Coast Guard.

Credit: USCG Pacific Northwest
Forty containers were lost off an inbound ship about 43 miles west of the Strait of Juan de Fuca entrance, according to the U.S. Coast Guard Pacific Northwest.