Several rest areas along I-5 closed in Skagit, Snohomish and Whatcom counties

The Washington State Department of Transportation has closed five I-5 rest areas north of Seattle because of excessive trash, vandalism and a staffing shortage. 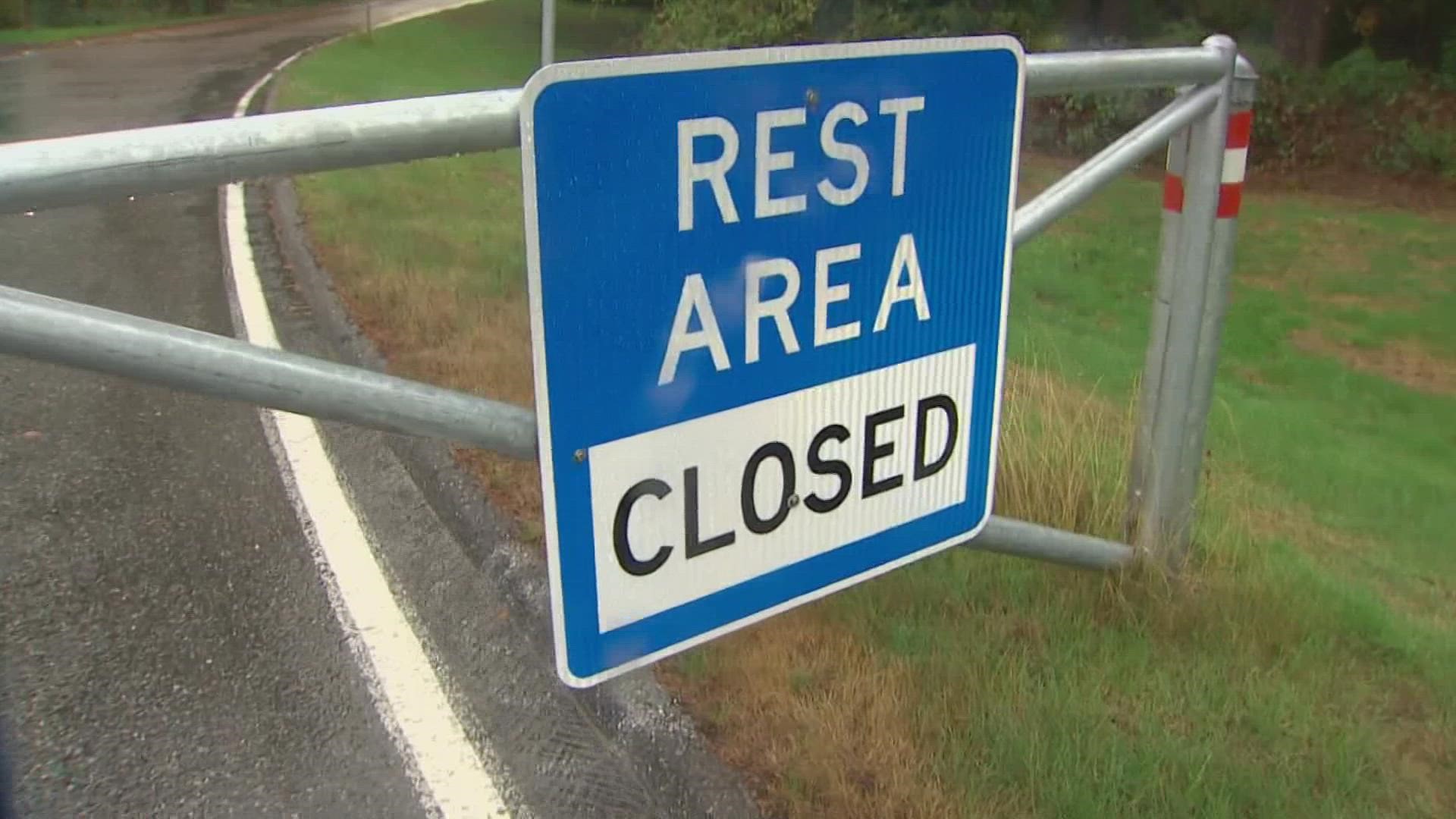 EVERETT, Wash. — Travelers on I-5 along the north Sound should be mindful of rest stop closures while considering places to take a driving break.

The Washington State Department of Transportation (WSDOT) announced the Smokey Point rest stops north of Marysville and the Custer rest stops north of Bellingham will be closed for at least three months starting October 15. The closures impact both northbound and southbound rest areas at these locations.

The Silver Lake rest area in Everett off southbound I-5 closed in late September for maintenance and will stay closed indefinitely, according to WSDOT.

"The biggest driver behind this is staffing," said WSDOT spokesperson Bart Treece. "We just don't have the staff to keep the rest areas up in the condition where folks really need it to be."

Treece said WSDOT has been catching up on staffing ever since a hiring freeze at the beginning of the pandemic. The changing of the seasons is also a factor, with crews diverting to road maintenance as colder weather kicks in.

"Our priority is keeping the roadways safe for all users, and shifting our staff and resources is what we need to do, moving into the winter months," said Treece.

WSDOT is also seeing an increase in vandalism and illegal trash and waste disposal in recent months, with some rest area visitors extending their stay, and in some instances, WSDOT employees facing verbal abuse from visitors.

"The decision to close the rest areas, it's not taken lightly," said Treece.

Those planning on taking breaks while driving on I-5 in Whatcom, Skagit and Snohomish counties should plan ahead and be aware of the rest area closures before hitting the road.

Emersen Phillips and her father, Stephen Shubert, were traveling from Burlington Friday afternoon when they pulled over at the Everett rest area on milepost 188 only to find it blocked off.

Shubert, who travels down the route to visit his daughter in Seattle often, said he was caught off guard.

"It's stupid," said Shubert. "It's very inconvenient, very inconsiderate, and shows extremely bad planning on the part of the state highways."

WSDOT said it will assess reopening dates early next year based on staffing availability.

"It's going to take some time for us to recruit and train and get that person and people who are staffed in those positions ready to go," said Treece.

For RV travelers, dump stations at the Silver Lake and Smokey Point rest areas in both directions will remain closed.

WSDOT said they are working to open dump station access at the northbound I-5 Smokey Point rest area in the next few weeks. The Custer rest areas do not have dump stations.