A Sequim teacher is back in his classroom for the first full week of school after a frightening injury that could have killed him. 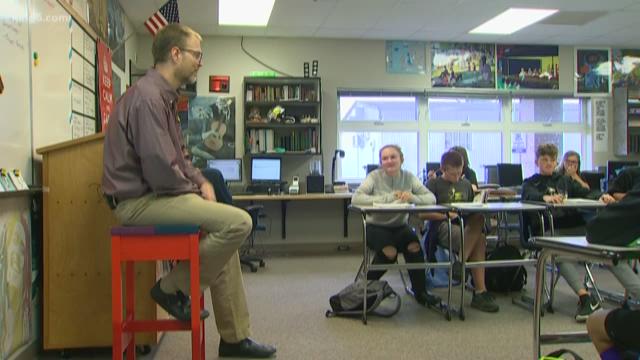 Jon Eekhoff probably knew better, but he did it anyway.

Last St. Patrick's Day he took to the roof of his Sequim house for some spring cleaning.

"It was a sunny day, and he wanted to wash some moss off the roof," Jon’s wife Cheryl said. "I didn't really agree with him, and kind of shook my head."

She was right. Jon fell 20 feet from the roof and suffered a severe brain injury.

"There was a lot of talk that I might not make it," he said. "That was the really scary part."

Jon was in the hospital for two months, most of which he doesn't remember. Doctors had to remove part of his skull to treat the injury, but Jon battled on.

He was out of the hospital in time for graduation but had to wear a helmet to protect his still recovering brain. At commencement, teachers wore helmets in solidarity.

"There were so many things," Jon said breaking into tears. "Students came up to me. They laid hands on me. It was amazing."

Cards and letters from old and new students flooded in, as well as hundreds of stickers to adorn Jon's new helmet.

The community even raised $10,000 for medical expenses.

"It was just kind of shocking," said Jon. "I still get emotional. We are so lucky."

"I'll see people, and they would start talking to me very loudly and slowly like I couldn't understand. Then I would start to talk to them, and they couldn't believe it."

This isn't the family's first bout with hardship. Their eldest son was diagnosed with cancer three years ago but is healthy now.

Cheryl says the couple plans the use the remaining money from Jon's medical account to help others in their community.

"We've been very lucky. We're not pushing our luck anymore. We just want to pay this forward."

Jon says he feels strangely fortunate for his Saint Patrick's Day fall after seeing so much good come from his community.

But he said he wants to make one thing clear. From now on, he's listening to his wife about the roof.

"I don't do anything where I can hurt myself any longer," Jon said.