U District upzone plan allows roofs up to 320 feet 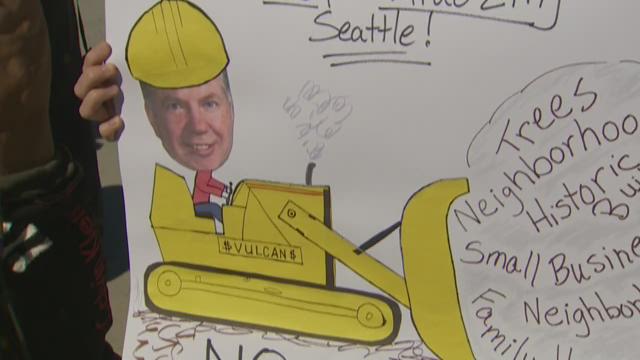 SEATTLE – Seattle Mayor Ed Murray unveiled an ambitious vision for the city's University District on Monday, and it involves potentially tall towers and major redevelopment near "The Ave.”

"This plan is about getting growth right," said Murray at a rollout of the plan near 50th and University, saying, "This proposal will lead to me equity in the U District, by mandating hundreds of affordable homes."

It includes raising the roofs, for developers for several blocks as high at 320 feet. Currently, zoning allows buildings only as high at 65 to 85 feet in the same area, according to the Mayor's aides. Other parts of the plan including raising residential heights to 75 feet in other blocks and mixed use developments as high as 240 feet, in the area close to the planned Brooklyn Light Rail station, slated to open in 2021.

Councilmember Rob Johnson, whose district includes the area, and whose committee will hear the legislation, was at the announcement.

"Without zoning changes, we're not producing enough new housing, and affordable housing have to do to continue to call this place home," he said.

But it is a proposal not welcomed with open arms by some residents. Dozens showed up to the Mayor's announcement, holding signs, and interrupting the presentation.

"I think it's an excuse to change the zoning to make developers more money,” Lin said.

“We are especially interested in reviewing how the executive will address displacement in the new proposed University District upzone legislation as intended by the MHA-R bill. Because this upzone increases zoning capacity beyond what was anticipated in the MHA-R bill, we look forward to working together to ensure increased affordability requirements for the neighborhood. From the MHA-Rlegislation: ‘The Council intends to consider whether to include higher [affordability] performance and payment amounts … (b) [in] areas where the increment of increased development capacity is greater than the standard MHA-implementing zone change; and (c) … to increase affordable units sufficient to offset the affordable units at risk of demolition as a result of the increase in development capacity due to MHA."

Gayle Nowicki owns Gargoyle's Statuary, near 47th Street and University Avenue, and said she welcomes the upzone, with conditions.

She said her worry is the changes could ultimately affect the character of the neighborhood, "to keep it the way we love it here, eclectic and rich.”

A council committee will hear the legislation on September 20 at 9:30 a.m.