When we talk about hacking, it's usually not good news. Well here's a story about how a group of volunteers use their hacking skills to help put presents under the Christmas tree for children with cognitive and physical disabilities. 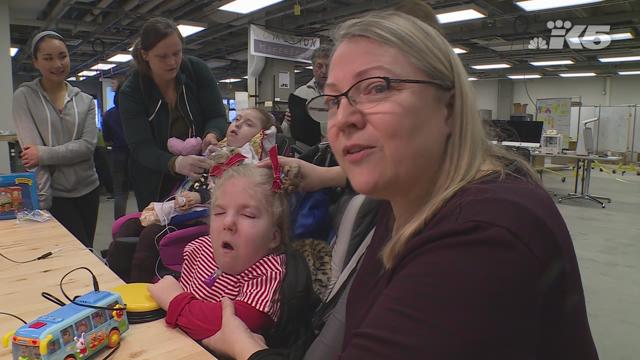 SEATTLE -- When we talk about hacking, it's usually not good news. Well here's a story about how a group of volunteers uses its hacking skills to help put presents under the Christmas tree for children with cognitive and physical disabilities.

The only reason 8-year-old Sophia Grace Sunde and her mom Stacey can play with a toy train is because it's been modified, or hacked, by a group of volunteers at the University of Washington.

“I could walk into a larger toy store and maybe find one thing that she could somewhat interact with,” said Sunde, whose daughter has physical disabilities and uses a wheelchair.

A kid like Sophia cannot operate the on and off switch on a typical toy. So the volunteers, who gathered for a toy hacking event at the UW Sunday, pry open toys and install what looks like a headphone jack.

Parents can then plug in a large, easy-to-press switch, which makes it possible for children with strength challenges or cognitive disabilities to operate the toy.

“Toys are developmentally important, so they are fun, and that's a good part of them, but they also teach things like cause-and-effect, motor skills, independence,” said Molly Mollica, a UW bioengineering student who helped organize the event, which attracted dozens of students, faculty, engineers, and people from the community.

Ananda Dorje is one of the volunteer toy hackers. He develops assistive technology in Seattle Public Schools and says adaptive toys are not always an option for many families.

The modifications at the toy hacking event cost about a dollar. When finished, they'll end up wrapped and under the trees of dozens of local families whose kids, like Sophia, just want to play along.

Toy hackers say the changes are safe and do not increase the risk of an electrical hazard.

“I’ve been doing this for three years. Other people have been doing it even longer, and we’ve had zero problems because all we’re doing is adding an additional switch. We’re not adding any extra batteries or any extra firepower, so to speak, we’re just adding another way for the toy to turn on,” said Mollica.