Sweeping Seattle parking changes may be on the horizon

It's the first step in what could be a massive parking overhaul in Seattle, aimed at identifying and utilizing unused spots near transit corridors. 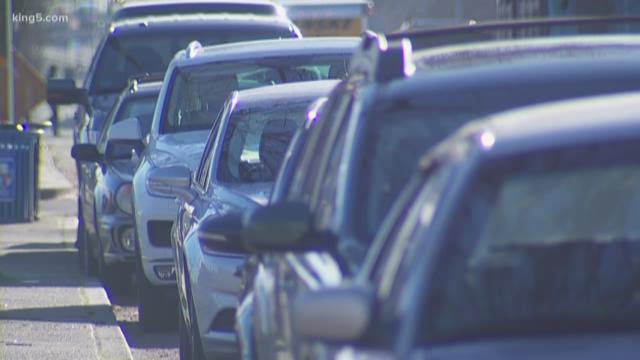 Could Seattle make sweeping changes to the parking code? That was the discussion at a council committee hearing on Tuesday.

Late last year, then-Mayor Tim Burgess forwarded legislation for so-called flexible parking. The legislation aims to identify and utilize unused spots near transit corridors. It's viewed by Councilmember Rob Johnson also as a way to encourage developers to build more affordable housing. Parking garages and lots are one of the most expensive parts of a project, according to Johnson.

A report from the Department of Construction and Inspections says the language aims to:

-- Modify residential parking regulations, where parking is required, to recognize differences in the likely auto use and ownership of intended occupants of new developments, such as projects provided for low-income, elderly, or disabled residents.

-- Rely on market forces to determine the amount of parking provided in areas of the city that are well-served by transit, such as Urban Centers and Urban Villages. LU 6.4 Consider setting parking maximums in Urban Centers and Urban Villages, where high levels of pedestrian, bicycle, and transit accessibility make many trips possible without a car.

-- Establish bicycle parking requirements to encourage bicycle ownership and use.

-- Limit the off-street impacts on pedestrians and surrounding areas by restricting the number and size of automobile curb cuts, and by generally requiring alley access to parking when there is an accessible, surfaced alley that is not used primarily for loading and when not prevented by topography.

-- Prohibit most street-level parking between buildings and the street in multifamily zones and pedestrian-oriented commercial zones in order to maintain an attractive and safe street-level environment, facilitate the movement of pedestrian and vehicular traffic, minimize adverse impacts on nearby areas and structures, and, where appropriate, maintain or create continuous street fronts.

-- Allow shared off-site parking facilities for more efficient use of parking and to provide the flexibility to develop parking on a site separate from the development site. Ensure that such parking is compatible with the existing or desired character of the area.

-- Require parking in areas with limited transit access and set the requirements to discourage underused parking facilities, even if occasional spillover parking could result.

-- Locate off-street parking facilities to minimize impacts on the pedestrian environment, especially in areas designated for active pedestrian use.

-- Limit parking in City parks to discourage auto use and to limit the use of parkland for parking private cars; where parking is needed, design parking facilities in ways that preserve open space, green space, and trees and other mature vegetation.

-- Prohibit principal-use parking in places where that parking would be incompatible with the area's intended function.

-- Discourage the development of major stand-alone park-and-ride facilities within Seattle.

-- Allow standards to be modified for required off-street parking associated with public facilities and small institutions based on the expected use and characteristics of the facility and the likely impacts on surrounding parking and development conditions, and on existing and planned transportation facilities in the area

Johnson says there will be a public meeting on the issue in February and final language could include changes to on-street parking as well. It could be several months before Johnson's land use committee considers an ordinance.